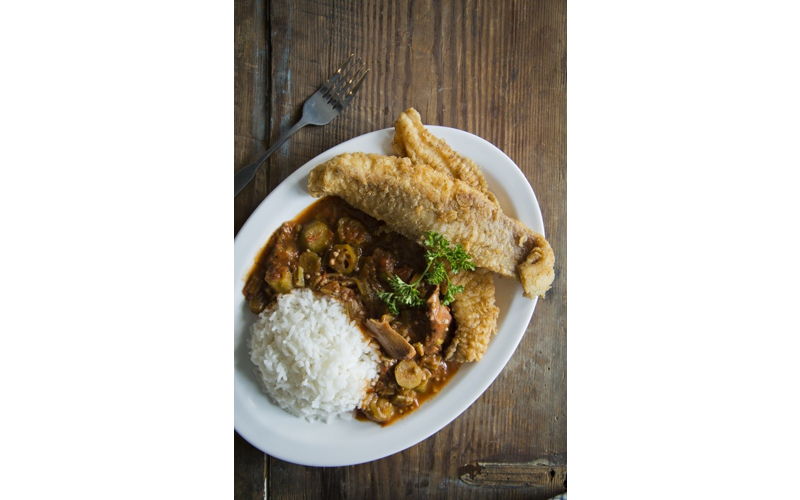 Off the Eatin' Path

When it comes to finding Gullah cuisine, the search can be perplexing. The entrepôt for the African slave trade, Charleston sits in the center of the Gullah Geechee Corridor — an area spanning from Wilmington, N.C. to Jacksonville, Fla. And for generations the Lowcountry has been known for carrying on the culinary traditions of the West African slaves who created what today we call the farm-to-table movement, a culinary cannon built on piecing meals together with whatever they could — rice, shrimp, okra, whiting, and greens. But in the past 30 years the black population on the peninsula has decreased by 55 percent and with it, restaurants that offered these traditional flavors have disappeared.

Queen Quet Marquetta Goodwine, head of state of the Gullah/Geechee Nation, says there are a couple of reasons why finding Gullah restaurants can be difficult. The first? The economic downturn.

“Most times these restaurants are sustained through tourism,” she says. “But people are being displaced and rents are going up higher, higher, and higher.”

Alluette Jones of the former Reid Street organic soul food spot Alluette’s Cafe, saw her business close last August when the land was purchased by Hyatt Hotels. “It’s hard to now compete because everybody has come in and taken a stake in the market, redeveloping neighborhoods to astronomical prices,” she says. And while Jones is working on a new venture — branding Geechee Girl products and T-shirts — owning a restaurant was her first true love, one she’d like to do again. But, she says, it would be nearly impossible to make it happen in downtown Charleston. “I can’t go somewhere and spend $20,000 a month on rent for a soul food place,” she says. “I’m looking for investors.”

Without Alluette’s and Ike’s and Huger’s, where can you go for Gullah then?

“Some of the places that are still open, they’re off the beaten path,” says Goodwine. “You have to scout them out to find them. You don’t just come to town and see them.”

Another roadblock? The fact that for years the word “Gullah” was associated with being inferior. “For too long people were indoctrinated to believe that if you were Gullah or Geechee, you lacked education. You were an ignorant, rice-eating person, and no one wants to be considered ignorant,” says Goodwine.

So restaurants avoided using the term Gullah, with many opting for the soul food title or simply avoiding titles all together. “People don’t wear the badge of their ethnicity on their shirt,” Goodwine says, and that can be a problem for tourists. “Tourists would like everything to be labeled, but it’s a matter of going into a restaurant and communicating with the people to learn who the people are.”

But Goodwine believes the biggest issue facing many Gullah restaurants is a lack of financial wherewithal to sustain them. “They don’t buy advertising,” she says. “They need the word of mouth. They need community members saying, ‘Check this place out.'”

With that in mind we posed the question to a few experts — where do you go to get good Gullah food? From gumbo to grits, Goodwine, Gullah oral historian Giovanni Richardson, Charleston Culinary Institute’s Kevin Mitchell, and Chef BJ Dennis (read about his Gullah feast on page 18), shared where they like to go for Lowcountry Gullah cuisine.

Long noted as serving the best okra stew in town, Dennis says that while Bertha’s may fall under the term “soul food,” the kitchen does Gullah right too. And while you may not realize where Bertha’s is, you’ve likely driven past the little blue building a dozen times. Head up Meeting Street Road and you’ll find it. The kitchen dishes up stewed collard greens, mac and cheese, lima beans, and more at affordable prices.

In her 1970 book Vibration Cooking: Or, the travel notes of a Geechee Girl, Vertamae Smart-Grosvenor wrote, “White folks act like they would starve for sure if they couldn’t have a hunk of meat. Eatin’ neck bones don’t bother me.” That prevalence of neck bones in Gullah dishes can still be found at Hannibal’s Kitchen. “It’s the real deal,” says Goodwine. Tucked on the East Side behind Trident Tech’s Palmer campus, locals having been heading to Hannibal’s for traditional dishes like whole whiting, crab rice, and okra soup plates with smoked neck bones and pigtails since 1985.

Today a national treasure, for years Martha Lou’s got by on the business of neighborhood regulars. But thanks to folks like Chef Sean Brock and headlines in the New York Times, now it seems — as the parking lot license plates will attest — that every out-of-town visitor wants a bite from this tiny pink eatery. And Goodwine emphatically agrees that Martha Lou’s qualifies as Gullah. “She serves a lot of different native Gullah Geechee dishes,” she says. Chitterlings and okra soup regularly make the menu in addition to more soul food dishes like fried chicken and bread pudding. But perhaps the most amazing thing is that Martha Lou is still the one behind the stove, serving up her classics at age 85.

Kenyatta McNeil and his mother Carolyn McNeil run this spot on Line Street with the focus on cooking with what you have. Of course, being from Charleston, that means seafood. Nana’s menu changes frequently and includes dishes like hoppin’ john, string beans, chitterlings, collards, oyster purlou, turnips, and, of course, garlic crabs.

“She makes some real good deviled crabs,” says Dennis of Alice Warren’s My Three Sons restaurant. Warren is something of a culinary legend in Charleston. She’s been professionally cooking for 40-plus years. First it was at the Ladson House on President Street before opening her own Alice’s Fine Cooking on King Street. Warren was working at Ike’s Hot Chicken and Fish on Meeting Street until it closed last September. Now, her loyal followers can once again find her serving up her time-tested specials on East Montague Avenue. That means dishes like Alice’s crab soup, seafood rice, and banana pudding.

Head up 17 North to McClellanville, make a U-Turn, and you’ll come to Buckshot’s. This family operation has been in the carry-out and catering business for 30-plus years. “They, in my opinion, are the truest Gullah restaurant doing farm-to-table,” says Dennis. Mitchell agrees. “April Mazyck, who owns it, she truly knows and understands the culture,” says Mitchell. Mazyck keeps the cozy dining room filled with plates of fried catfish, cabbage with hamhocks, and okra stew. And if you hit it up on a Friday night, you just might get to enjoy some entertainment when Buckshot’s hosts Southern soul evenings with live music and all-you-can-eat oysters or crab legs.

If you ever ate at Hilton Head’s Roastfish & Cornbread, then you know Chef David Young. Young is now heading up his new operation, Bluffton’s Burnin’ Down South. But you can find the same Gullah staples — think shrimp gumbo, red rice Gullah bowls, and alligator. “This place does truly international food,” says Goodwine. Though it requires a road trip, she says it’s worth it. “Most people wouldn’t find it and know it’s a Gullah Geechee-owned and-operated restaurant. He’s taken traditional foods and added international flare.”

“Dye’s Gullah Fixin’s is on Hilton Head Island and it’s more of a home-type setting, like a diner,” explains Goodwine. Dye Scott-Rhodan calls herself an outland Gullah having grown up in Ridgeland, S.C. One of 10 children, she said, “We had a lot of love, but not much else.” Making due meant learning to cook from her mother and grandmother, with many ingredients coming from the garden. Today, Scott-Rhodan follows the same tradition by using only the freshest ingredients for her Lowcountry boils, flounder with Gullah seasoning, and deviled crabs. But if you’re going to make the drive, make a reservation. Scott-Rhodan cooks from scratch, and if you don’t call ahead, you aren’t getting dinner.

“I can say only one thing, garlic crabs — awesome,” says Richardson. The Brown family serves up the classic Gullah dish at their colorful fish market where patrons can buy fresh catch and conch stew to go. Seafood platters sell for $19.69 a plate but include a choice of four items which can be anything from three large pieces of whiting to 10 shrimp to five oysters to two pieces of shark.

So why should you go to these places? Mitchell says eating Gullah cuisine is an act of historical preservation. “Field slaves who had nothing, said, ‘We got these pig feet, we have chittlin’s,’ and they created cuisine from those products that other people thought were inferior to sustain their lives,” says Mitchell. “In their own right they were geniuses. And we have to keep those traditions alive.”

We talk about Southern food as though it’s a singularity,” says Forrest Parker, the chef at the Old Village Post House in Mt. Pleasant. “But to me it seems plainly evident that it’s extremely diverse.”

Psychedelic country band Futurebirds and Band of Horses vocalist Ben Bridwell will perform at Firefly Distillery as a part of its concert series Safe Sounds.