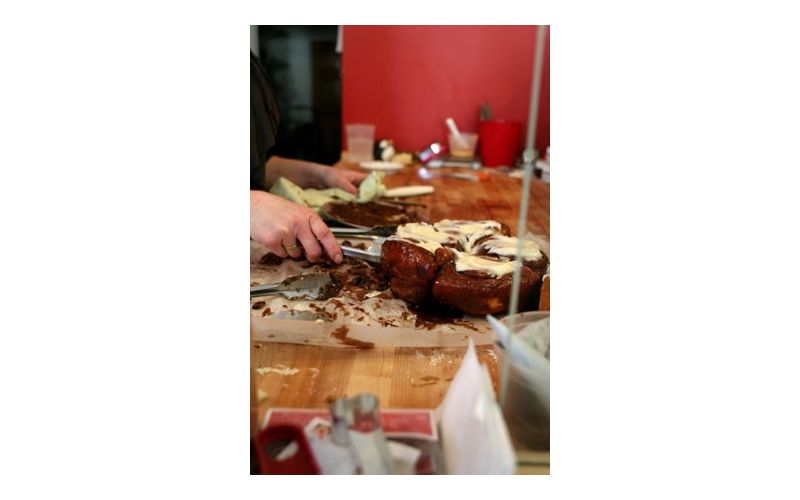 Go Ahead, Get Sticky

For many in the Holy City, brunch is a mainstay of Sunday mornings. Whether it’s a cure for the common hangover or simply a time to reconnect with friends, the hearty meal is a popular one. But Lauren Mitterer of WildFlour Pastry has a new idea for Sunday mornings: Sticky Bun Sundays. And it’s really taken off.

Her little Spring Street shop — which she opened in September — is always abuzz on Sunday mornings, often with customers who she knows by name. They come for the hot coffee, the sunny seats by the window, the housemade scones and muffins. But mostly they come for the sticky buns.

These sticky-sweet concoctions date back to Mitterer’s Red Drum Gastropub days. When she was pastry chef there, she sometimes featured them as a special, always to much acclaim. She even taught a cooking class to folks wanting to learn how to make the classic rolls.

She serves them up two ways: either topped with caramelized pecans and brown sugar, or with cinnamon and a cream cheese frosting. The cinnamon is our favorite, inspiring memories of freshly-baked monkey bread. It’s perfectly chewy and sticky on the outside with a soft, steaming interior. Although you might be tempted to split one of these big buns, you’ll regret the decision once you start devouring it, and you’ll end up fighting over every last crumb. Do yourself a favor, and get your own. They’re only $2.50 each.

Mitterer’s secret for her special sticky buns is butter — lots of it.

“I’m not really afraid to use a lot of butter,” she says. “I’ve been making this recipe for so long that it’s kind of become part of me.”

The base is a yeast dough, with the butter folded (laminated) into it. It isn’t a traditional process but adds another level of flavor. Once the buns are out of the oven, she tops them with their respective garnishes and releases them to the hungry masses. These days, she goes through about 60 a day.

Sadly, the sticky buns are only available on Sundays, but WildFlour is open every day but Monday. And the buns aren’t the only good things on the menu — not by a long shot. Mitterer says the double chocolate cookies are a huge hit, along with the savory scones. We tried the mozzarella and sun-dried tomato on a recent visit, and it was buttery (of course), soft, and just crumbly enough. You can also try the ham and three-year cheddar concoction, or just go basic with a plain scone with jam. Decadent cupcakes, pies, custards, sweet breads, and other goodies make up the rest of the menu, along with hot coffee drinks.