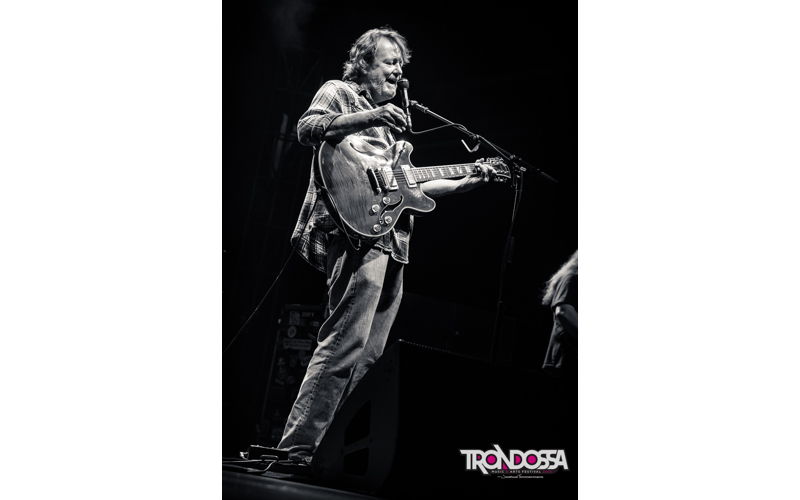 On the Friday evening before Charleston’s Trondossa Festival kicked off in 2018, the members of Widespread Panic gathered with their crew next to the stage to bless the site of the event, North Charleston’s Riverfront Park. Among a carefully placed array of ocean jasper and other crystals, the assembled group added sunflowers, carnations, and a rainbow of other petals.

It’s an intention-setting ritual that harkens back to the band’s experience in the early ’90s on the H.O.R.D.E. tour. When that show reached a new city, the late Col. Bruce Hampton (the leader of the Aquarium Rescue Unit) gathered the bands to focus their energies before the weekend’s concerts.

Nearly 30 years later, Widespread Panic still takes the stage with the relaxed but purposeful approach Hampton demonstrated. Trondossa (pronounced tron-doss-uh, “doss” like in “MS-DOS”) takes its name from a song by Hampton, loosely meaning a romantic intent to do the right thing. The two-night concert differs from other dates on Panic’s schedule — although they ceased touring in 2017 in favor of multi-day weekend runs, Trondossa stands out for its multi-band lineup and Panic management’s role in designing the entire scene, including the food and art vendors present.

City Paper caught up with John Bell at his home in Dahlonega, Ga., on a Tuesday morning in March, in between two weekends of three-day stands in Port Chester, N.Y. and Durham, N.C.

CP: Do you still run a wellness retreat out of your home? The last time we spoke, you were sitting in your energy room.

JB: My wife runs her practice out of here, but we don’t run the classes like we used to. I’m upstairs this time, about to hit the garden.

CP: The photos of last year’s site blessing before Trondossa made me wonder how this show stands out from others on your schedule.

JB: It’s basically just a full day of music and exposure to art and food. We’re not trying to put it over the top and get 100,000 people there or anything like that. It’s supposed to be a little more than your usual evening out. It’s a weekend where you can get into the long haul with not just us, but Umphrey’s (McGee) and a little more eclectic collective of bands than you’d normally get in the usual club or theater scene.

CP: You guys set out to make a change a few years ago when you moved to multi-night runs instead of touring. I’m sure you’re home more often. Do you feel like you’ve accomplished what you set out to do?

JB: So far, so good. It’s a couple years under our belt and that’s worked out OK. It’s basically availability and personal inclinations that guide [our schedule]. It’s not going to be the exact same every year, but there will be some favorite spots that we visit. It’s still an adjustment. If you’re used to riding around on a bus for 30 years, it takes a little getting used to just doing airplanes and then getting right back home and getting into the swing of it.

CP: Let’s talk about the Trondossa lineup. You’ve got a little bit of history with Umphrey’s, and the Marcus King Band. What was your first exposure to him?

JB: I think we played a gig together a year or two ago. He’s got another great band on the scene, and they keep coming [laughs] and we’re still here so we still see them. He’s a cool guy and the band is easy to get along with, so if we get a chance to cross paths we make that happen.

CP: I’d put Rainbow Kitten Surprise in a similar category to Moon Taxi last year as adding a more polished pop sound, but Umphrey’s McGee is a completely different sound than Sturgill Simpson. Coming just before Panic each night, how do you think that will mix things up for the vibe compared to last year’s shows?

WP: Well, who knows? You kind of know these things after the fact. But Umphrey’s packs a wallop. They’re great musicians with a lot of hip ideas, and again, behind the scenes, they’re fun to hang out with, so that goes a long way. You try to keep the egos at a minimum and go off and have a good time, and those guys understand that formula.

CP: A few of them live in Charleston too, so they’ve got roots here.

JB: I love Charleston. You don’t even need the music. Just come to Charleston.

CP: Have you spent any extended amount of time here in the past? Is it a place you try to pack an extra day before or after?

JB: You know, between golf and fishing, that can lure you in for an extra day. Charleston’s not too far away, and it’s one of those beautiful old fort towns that has a lot of history. A lot of spirits floating around. And good food. We always have a great time. It’s one of the cities we’ve been going to a lot since we started out with this band. Ever since we could afford to keep tires on a vehicle.

CP: You once mentioned the idea of moving Trondossa to different locations throughout the year. Is this now something you feel will be an annual thing in Charleston?

CP: I’ll wrap up with some quick-fire questions. What’s the last meal you ate in Charleston?

JB: It was probably a Lowcountry Boil that was going down at the last Trondossa, but I think it was a variation, because it was all the same ingredients but done on the grill. It gave it a little smoky flavor.

CP: What’s the last song you wrote, or one you’re working on?

JB: Well if it’s one I’m working on, you’re not going to hear about it until it comes out. But we’ve got, shoot, a handful of songs we’ve been messing around with. The last one we put together as a band that we’ve been playing is “Sundown Betty.”

JB: I have no idea. There are lots of things we continuously mess around with that haven’t seen the light of day. But then there’s a lot of stuff that happens on stage, and then you revisit it and next thing you know, that becomes a song.

CP: Do you have a favorite rocking chair, and what’s the view from it?

JB: All rocking chairs are pretty good, as long as you ain’t a cat.

CP: Do you have a favorite Oliver Wood song? [The Wood Brothers play this year’s Trondossa]

JB: Is that one of the Wood Brothers?

JB: Boy, no favorites there. How far down the rabbit hole are you going to go with this little checklist? [laughs]

CP: Here’s the last one — a fan submission. Is there Gold Bond powder on the bus?

JB: We don’t have a bus anymore! Speak to other buses.