What If? Productions celebrates their 10th season with a quirky comedy 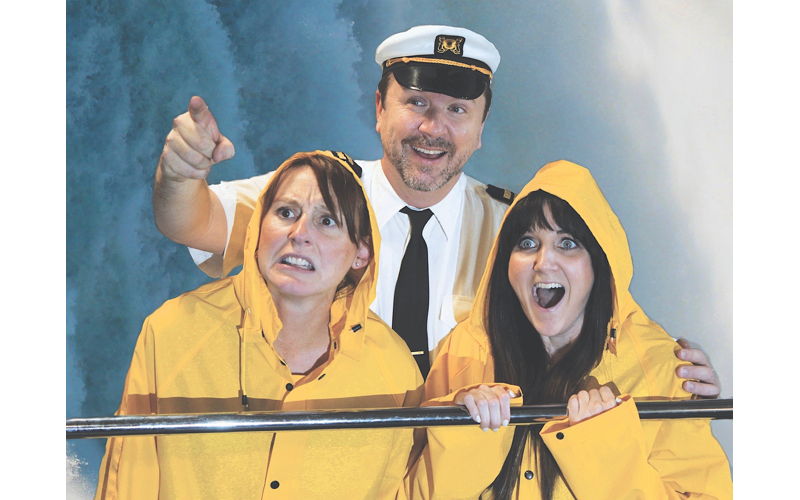 The City Paper once called What If? Productions the “go-to ‘You won’t see it anywhere else in Charleston’ theater company,” and it’s doubtful that you’ll see a production of writer David Lindsay-Abaire’s 2000 play Wonder of the World at any other theater in town. But that’s the delightfully weird play that’s kicking off WhatIf?’s 10th season.

The plot concerns a young woman named Cass (played by Beth Curley), who discovers a particularly disturbing sexual fetish in her husband Kip’s sweater drawer. We can’t give away exactly what that fetish is, but it’s upsetting enough to send Cass on a journey of self-discovery that takes her to Niagara Falls (one of her “bucket list” destinations), where she falls in with a group of oddball characters while figuring out how to be truly independent for the first time.

Those characters include a lonely tour-boat-captain named Mike (played by What If? artistic director Kyle Barnette), a suicidal alcoholic named Lois who wants to check out of this mortal coil by going over the Falls in a barrel, a bickering couple of private detectives, and naturally, a psychologist who moonlights as a clown.

So there’s a lot going on here, and most of it is comedically absurd, but Barnette is quick to point out that Wonder of the World is not just about the weird characters or belly laughs.

“At the end of the day, it’s about Cass,” Barnette says. “It’s about the journey her character takes from her marriage to what she thinks is her independence. Yes, she comes across a bunch of insane characters on that journey, but they all play a part in her eventual independence.”

Even in a long history of odd and obscure productions, Wonder of the World is pretty quirky. It’s also not an especially well-known play in the oeuvre of David Lindsay-Abaire, who is best known for his Pulitzer-Prize-winning drama Rabbit Hole. In fact, Barnette says he wasn’t even aware of this play until Erin Wilson of Charleston’s PURE Theatre brought it to his attention.

“When Erin brought the script to me, I didn’t know it,” Barnette says, “but I read it and I realized that this is the weird, whacked-out kind of fun that we do best. I’m a big fan of the absurd. We do comedy really well, and we wanted to kick off our 10th season with something that represented what we do best.”

So it’s not unusual for What If? to take on the unusual. In fact, the only odd thing about What If? doing Wonder of the World is perhaps that Barnette isn’t directing it. Erin Wilson is taking the reins this time out, leaving Barnette as simply one of the actors. It was something he says he had a little trouble adjusting to at first.

“I’ve been the artistic director for a while, and it’s really hard to step away from the director’s position,” he says. “But if you keep doing the same thing, eventually you’ll drive yourself crazy and make yourself stale, and produce the same things over and over again. You want to give yourself a different perspective, and Erin brought such a different vibe and a new way of looking at things. It gives What If? a kind of reboot, and it makes me want to find more directors who can produce the aesthetic that we’re used to, but also bring a lot of their own creativity and artistry to the shows.”

“Beth has been with us from the very first season,” he says. “She’s been in at least one show per season since we started. And she’s fantastic in this. It’s really a powerhouse comedic performance; she’s quite remarkable. I think people should just come see the show because of her performance itself.”

From a larger perspective, Barnette, who co-founded What If? with Brian Porter, is more than a little surprised that his company has been able to survive and even thrive in Charleston’s crowded theater scene for 10 seasons.

“It’s remarkable that we’re still surviving,” he says. “There are a lot of theaters in town. I think we’re creating a niche that wasn’t there before. We’re not everybody’s taste; we don’t do classical theater or giant musicals. But we feel like we’ve found our place on the theater scene. If you don’t take a risk, you remain the same. We gamble, and we risk, and we’re often rewarded.”

Barnette has some personal favorites among the 10 seasons of What If?, most notably the stripped-down, bare-bones versions they’ve done of well-known productions like Hair, Cabaret, or Amadeus. But when asked what stands out to him the most in What If?’s history, he hits upon a production that sums up the different perspective they’ve been able to bring to the community, and how effectively they can put across potentially alienating material.

“One show we took a big risk on was called Thrill Me,” he says. “It’s an obscure musical about Leopold and Loeb.”

Yes, that Leopold and Loeb, the two men who “thrill-killed” a young child in 1924 in an attempt to commit the perfect crime.

“We produced that in a very minimalistic style, and it was one of our top five most popular things that we’ve ever done,” Barnette says. “It was a huge challenge but challenging ourselves is what What If? is about.”

Weekend Roundup: 30+ things to do for the last summer weekend