What if Charleston had been ground zero for a nuclear attack? 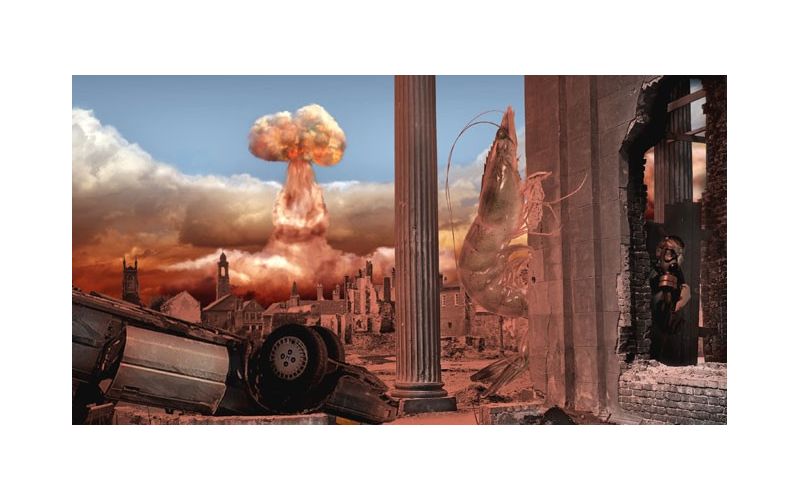 “We have just received word from Charleston, S.C., that a nuclear detonation of undetermined magnitude has taken place a few minutes ago. We don’t know anything else except the damage and injuries are expected to be extensive. There’s one last thing. Those who survived are going to need our prayers just as much as those who didn’t.

The last 15 minutes of the 1983 made-for-TV movie, Special Bulletin, are downright heavy. Before director Edward Zwick made his name with the 1989 Charleston-based Civil War film, Glory, he was hanging around the Lowcountry speculating on the aftermath of a much more devastating type of warfare.

In the film, a group of anti-nuclear activists ironically build a nuclear bomb, threatening to detonate it in Charleston if the federal government doesn’t disarm the nuclear missiles it has based here. Their plan is foiled, but the government bomb squad screws up and explodes the weapon in Charleston Harbor.

Chaos ensues. People die. Half a million people living downwind of the blast in Sout Carolina are evacuated.

When the film aired, NBC opted to leave the word “Fiction” emblazoned across the screen throughout its entirety. Still, due to the film’s realistic TV report nature, panicked calls were made.

“As for Charleston itself — the city of gardens and narrow streets and beautiful old houses — that city is gone forever. A new city may someday grow there years from now, or it may remain a desert. Whichever, the staggering loss of what once was can never be eradicated.”

Scary stuff. Fortunately, now that the Cold War is old news, and we no longer practice scrambling under our desks to ward off mushroom clouds, fears of a nuclear apocalypse generally don’t keep grade-schoolers up at night.

But hell, there’s some gnarly stuff going down in Syria and Iran. Remember Pat Frank’s post-nuclear tale Alas, Babylon? One errant missile later, we’ve got Russia and China playing nuclear darts against the U.S.A. in 2014. It only takes Israel getting a bit too feisty to set off a chain reaction that could bring out the old rivalries and predicate a throwdown of radioactive dust that would make coming down with leukemia look like a head cold.

Whether it’s an atomic explosion or something else — say, birth control in our water supply finally rendering us sterile — it’s entirely plausible that a Lowcountry without humans will one day exist again. But what would it look like? The Holey City When European settlers first arrived, Charleston’s peninsula wasn’t shaped like it is today. Much of today’s waterfront is built atop filled-marsh, and many of today’s thoroughfares were meandering brackish creeks.

“If you had some sort of major vibration, everything that’s built on fill would be suspect,” explains Evan Thompson, executive director of the Preservation Society of Charleston (and a City Paper contributing columnist). “Those buildings would be the first to fall apart, so you might speculate that you would start to see historical landforms return.”

In short, without people around to rebuild after an earthquake or explosion, the peninsula would start to get smaller. Marsh would return around the peripheries as buildings collapsed into the mud.

We already have examples of what our buildings would look like 200 years from now, in the Old Sheldon Church ruins in Yemassee and the Bennett Rice Mill façade at Union Pier Terminal. As wooden support beams rot, roofs collapse and leave behind brick wall shells.

“We’d be left with a bunch of brick foundations and maybe a few lucky chimneys,” says Thompson.

Water — which Charleston has plenty of — is a building’s biggest enemy.

“Preserving a house is just about keeping the water out,” Thompson explains, because where water travels, termites follow.

Plant life also speeds decay, and climbing vines like kudzu would flourish without humans to fight them back. The quick decay of the concrete foundations at the old Coast Guard base at the north end of Folly Beach is a prime example.

“Vines can be a structural parasite. The more that plants can break into brick and concrete, the more water damage can happen to deteriorate a building,” explains Dr. Norman Levine, a College of Charleston geology professor and the director of the Lowcountry Hazards Center. “Plants would actually do more damage than animals.”

Still, a 200-year-old house may be able to withstand 50 years of neglect and gradual decay before the walls begin to cave. On the contrary, newer construction could quickly begin to rot. Vinyl siding will peel off within a couple of decades, shutters will dangle and fall, and windows will shatter.

“If you go up Ashley Avenue and find a cottage built in 1880 that’s been added onto three times, those additions are falling off but the core of the house is still there,” says Thompson. “Anything that’s new lumber or plywood will be the first thing to go.”

Of course, a nuclear explosion would be accompanied by fire, reducing Charleston to rubble in just a few days.

“In a way, the Bennett Rice Mill façade is what Charleston would look like after a catastrophe,” claims Thompson.

That’s true, except that the land where the façade sits would soon be returned to marsh. Referring to 18th century maps, Levine points out that the spine of the peninsula’s high ground roughly follows the King Street corridor. As Charleston’s drainage systems become clogged with silt and mud, without maintenance, the harbor would begin to reclaim low-lying areas.

Likewise, structures like the Ravenel Bridge would begin to shift. Built to withstand an earthquake with a magnitude of 7.4 on the Richter scale, the bridge’s central span might last a century with no maintenance, but the entrance ramps would collapse much sooner.

Out in the harbor, the shipping channel would fill within decades.

“It would silt in to its equilibrium pre-dredge depths, which in the mid-1800s was about 25 feet,” explains Anton DuMars, an adjunct CofC geology professor and owner of Tideline Tours on Folly Beach. The Morris Island Lighthouse, on the other hand, with its recent fortifications, might withstand another century before collapsing. And it would be surrounding by water teeming with redfish.

By removing a top predator (humans), Tideline guide Weatherly Meadors (who recently completed her masters degree in marine biology at CofC) explains that the local food web would initially be thrown off but recover quickly. Top species under heavy pressure from humans — like red drum, for example — would quickly rebound, depleting the bait-fish that they feed on.

“It jumps a step and the next level down gets depleted,” says Meadors.

On land, carnivores like bobcats and coyotes that currently hide or live on the outskirts of the city would move in to formerly urban areas. Dogs would revert to scavenging and reassume a pack mentality, with smaller, less mobile breeds likely dying off. House cats would quickly return to stalking and hunting as their primary means of finding food. Without human eradication efforts, species like the pythons currently proliferating in the Everglades could easily become common in the Lowcountry, feeding on smaller mammals that utilize the shells of old buildings for cover.

Invasive species like pythons and kudzu would rapidly expand, and the erasure of humans from the ecosystem would be a boon for most plants and animals.

As CofC biology professor Reid Wiseman puts it: “If every single living creature in the biosphere disappears today, it’s not the end of the world because the sun is going to keep shining for five billion more years. The biosphere would be blessed if all of us were blasted up or down into paradise or the lake of fire for eternity.”

While nature would eventually recover, an atomic explosion would decimate every living thing in the area — at least for a while.

Beth Gniewek, a graduate student of the joint program between the College of Charleston and the Citadel, focuses her studies on post-WWII society, specifically on the advent of the atomic age and the fallout shelter phenomenon of the 1950s and ’60s.

As Special Bulletin depicts, during the Cold War Charleston was a logical target for an enemy strike. We house a major port, we’re a symbolic historic city, and in those days, we were a military hub.

Unfortunately for paranoid families during that time, we are not an excellent place to build a fallout shelter. We flood and our earth is muddy, so basements are notably absent in our homes.

Anyone within a couple miles of impact who failed to evacuate in the event of a Hiroshima- or Nagasaki-sized atomic attack would likely be killed.

“Charleston’s residents who were lucky enough to survive would suffer from radiation poisoning from fallout, which would subsequently result in chemical burns, nervous system disorders, and many developing cancer,” says Gniewek. Sickness and suffering would linger for generations.

In both the atomic attacks on Japan and the Chernobyl disaster in Ukraine, we have examples of the aftermath of such an occurrence. Nuclear fallout has proven catastrophic for animal life, while plants are more likely to survive.

“Mammals and insects require the lowest dosage of radiation for it to be lethal,” explains Gniewek. “In the case of Chernobyl, within 20 years of the accident, much of the land within the ‘exclusion zone’ was thriving ecologically.”

So, if Charleston were nuked today, anyone living downtown would see their real estate values immediately plummet. Folly Beach and Isle of Palms residents would probably survive, but they’d need to relocate fast or suffer serious radiation poisoning. Anything living in Charleston Harbor would likely be obliterated due to heat: dolphins, oysters, pelicans, etc.

Seagulls would lose their free lunch at our garbage dumps, and their numbers would drop, making room for other shorebirds and scavengers. Palmetto trees might weather the storm, although palmetto bugs would take a hit, before returning in swarms.

“Within several decades, Charleston might go back to nature,” says Gniewek. “But it would still be highly radioactive.”