We haven’t seen the last of Lisbeth Salander 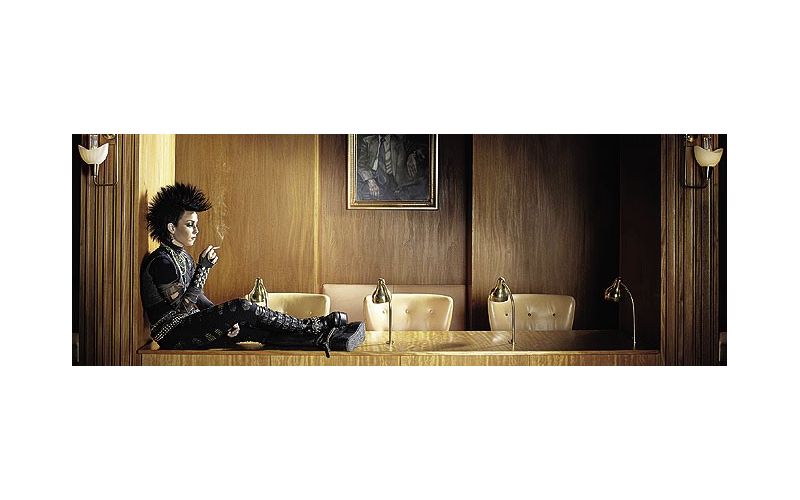 The punk rock Pippi Longstocking of the post-millennium, Stieg Larsson’s fictional heroine Lisbeth Salander (Noomi Rapace), is a rebel and adventurer, full of pluck and courage. She’s been through a lot in her short life, institutionalized for putting a torch to her abusive daddy, assaulted by her guardians and assorted thugs, and witness to some of Sweden’s baddest behavior. And yet, like Pippi, she keeps on keeping on, though where Pippi sported pigtails, Lisbeth rocks a mohawk, a hairstyle she employs as a graphic middle finger to the powers-that-be.

Lisbeth opens the latest in Larsson’s trilogy, The Girl Who Kicked the Hornet’s Nest, caked in blood and being MEDEVACed to a hospital in Gothenburg after the fracas at the end of the last installment. In the rather tedious The Girl Who Played with Fire, we saw tiny Lisbeth set upon and grievously harmed by her dreadful dad, Soviet crime boss Zalachenko (Georgi Staykov) and his giant freak show Nordic henchman — and Lisbeth’s half brother! — Ronald Niedermann (Mikael Spreitz).

Larsson’s series, the Harry Potter of crime thrillers for more sensation-minded adults, has certainly played up Salander’s vulnerability: She’s a slip of a girl continually plunked into the autoclave of danger. Now more vulnerable than ever, in the taut and engrossing concluding chapter, she’s laid up in the same hospital where the conspiratorial Swedes have housed her father, who was injured in that daddy-daughter showdown. While poor Lisbeth is on the mend, wrapped in gauze and forced to eat hospital salisbury steak for nourishment, crusading journalist Mikael Blomkvist (Michael Nyqvist), an exemplar of journalistic integrity (who Larsson modeled on himself), has decided to risk the safety of the entire muckraking Millennium news magazine staff by making Lisbeth his cover girl in a story about her grim, corruption-fighting life. Part of the charm of the Larsson series is the Euro-world it represents. It’s a world where left-wing journals are actually read by the public, a world that vaguely resembles one of the conspiracy-minded New American thrillers of the 1970s like All the President’s Men. For Larsson, evil is a quotidian feature of the world; the lair of thugs are included in that, for sure, but so are politicians, psychologists, lawyers, and other “upstanding” citizens. Combine a fairy tale and the latest documentary from Michael Moore and you’d get a feel for the contemporary mythos Larsson occupies.

If you thought the American legal system was a mess, as soon as doctors are done fishing the bullet out of Lisbeth’s skullcap, she is put on trial for attempting to murder her demonic father. Sweden is also, apparently, a very cozy country where everyone knows everyone else and the pregnant lawyer who steps up to defend Lisbeth is Mikael’s sister Annika (Annika Hallin), who initially has a hard time convincing the authority-suspicious girl that she can help her where others have only exploited, raped, and beaten.

Daniel Alfredson’s follow-up to his rather middling directorial turn in The Girl Who Played With Fire is a definite improvement on that plodding middle in the Larsson thriller sandwich. Perhaps it’s the momentum a wrap-up requires. Where the middle passage suggested plotline filler, The Girl Who Kicked the Hornet’s Nest sends the Larsson story out with a definite bang. But Larsson fans needn’t fear. While the Swedish phase of the trilogy has drawn to a close, the series begins anew in an American version of the mega bestseller, David Fincher’s upcoming adaptation of The Girl With the Dragon Tattoo.