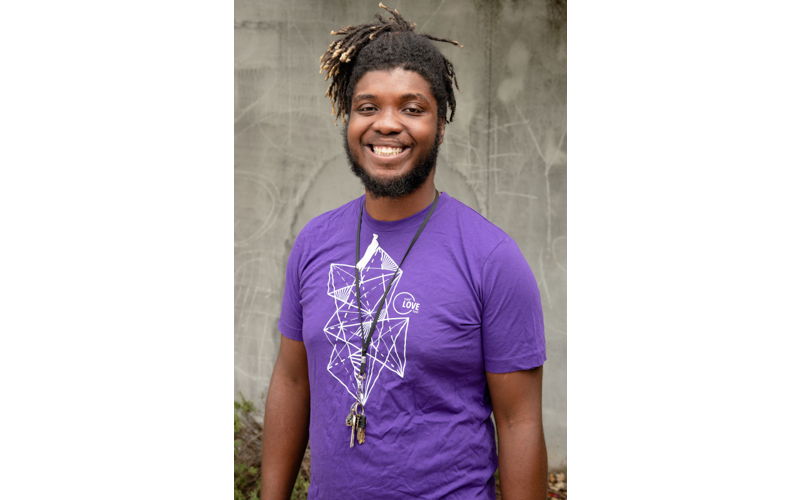 Like an ambitious career woman in a ’90s sitcom, the new center at 529 Meeting St. is trying to have it all.

The sprawling and labyrinthian office complex was abuzz with colonies of volunteers (some identifiable by the logos on their T-shirts, others not) on a sweltering Thursday evening.

We Are Family vice-chair Jessie Parks, 34, anxiously scrubbed donated drinking glasses with Clorox wipes before setting them down on the counter.

“You never know how long they’ve been in someone’s garage, and I don’t trust it,” she said, donning a fanny pack, white and blue Adidas Superstars, and a vintage dress from her own part-time gig “selling clothes in a parking lot,” as she puts it with a hearty laugh.

The room is teeming with items that will be sold in an on-site thrift store, expected to be — hopefully — the biggest revenue provider for the budding operation.

In the courtyard, a lone teenager holds a bucket of paint and a brush.

“I didn’t do the nose goes,” he explains while a gaggle of kids hold the door slightly ajar to make sure he finishes the job.

We Are Family executive director Melissa Moore, 40, walks into the soon-to-be thrift store portion of the building to tell everyone that the fire marshal needs “three feet of clear space” from one door to the other. Minutes later, a tween-ager wheels in a bike, unsure what to do with it.

It’s this exact spirit of community, scrappiness, and a dash of playfulness that Donna Gill, 53, wants to carry forward as plans for the facility crystallize in real-time. A place where informal meetings and networking lead to carpools and group shopping trips, where people can come relax, watch TV, and escape extreme weather at both ends.

Gill herself is currently homeless for the second time in her life. Her story, like those of many, if not most, people currently experiencing homelessness, is painfully ordinary. As she was moving out of the home she shared with her husband, an unscrupulous landlord kept her security deposit. She ended up sleeping in her car. This time around, she’s luckier. She’s sleeping on her friend’s couch after trying, and failing, to make it work with her husband one more time.

The number one thing she needed?

“A place to shower,” she says. “A place to use facilities that are accessible, and laundry. Also, I was homeless during the winter, but I did have my car. I was still cold. I can’t imagine people who are just in a camp.”

Though the facility’s operations will be handled by the LGBTQ-focused We Are Family, the day-to-day services will be the work of a hodgepodge of local groups looking to directly impact the lives of Charlestonians in need. Gill will help run The Herald, a local street newspaper sold by the homeless community that was housed in the back of a Citadel Mall arcade until very recently. Origin SC will help provide housing assistance in the form of workshops and supportive housing matches. The YWCA of Greater Charleston will help women and families with food pantries and health classes. Art Pot will encourage expression through art. A Google-funded computer lab will help people build resumés, write cover letters, and apply for jobs. MUSC will even offer health care through a telehealth clinic.

“It’s not defined,” Gill says of her newly-created title: Administrative coordinator. “Just like the entire center is not completely defined. We don’t know for certain what’s gonna happen until we open the doors.”

The two-story, 14,102 square foot locale between Meeting and Walnut streets — the latter of which is apparently known as “crack alley” to those familiar with the local homeless population — will provide wrap-around services to everyone from low-income families to those spending their nights at the One80 Place shelter down the road. At peak functionality, it will offer everything in the above paragraphs and more. As of Monday’s soft opening, it already offers scheduled showers, bag lunches from St. Matthew’s German Evangelical Lutheran Church, and computer lab access.

At a Ways and Means committee meeting in City Hall on May 24, Charleston Mayor John Tecklenburg praised WAF for taking on the gargantuan project.

“I’m just so grateful to them and the other organizations that are willing to step forward and help operate this facility to help our brothers and sisters in need,” he said.

“I approached him last year and the project moved very quickly,” Moore says.

The City of Charleston is paying the utilities and taxes on the property for the next 12 to 18 months, at most. We Are Family, in turn, is paying the city $1. When the lease runs out, the center will have to pack up and move. Geona Shaw Johnson, the city’s director of housing and community development, assures that everyone involved is keeping their eyes peeled for new properties.

One of the mayor’s conditions for the center was that it serve Charleston’s entire homeless population. In 2017, the Lowcountry Homeless Coalition reported 425 homeless individuals in the annual point-in-time (PIT) count. That’s a decrease of almost 125 people from the previous year.

The new numbers aren’t a cause for celebration for those on the ground.

“The numbers say that the problem is getting smaller, but we look around and it just doesn’t seem that way,” Moore says. “Charleston is a growing city, and any city, when it’s growing, so does homelessness.”

YWCA executive director Lavonda Brown thinks that the services at the as-of-yet unnamed center will attract a population that has likely been underestimated. For women and children especially, it’s hard to know who’s homeless if they spend their nights bouncing between family and friends.

“Until we create a space where they know that they can be served, I think we don’t have a clear picture of how many families are experiencing homelessness,” she says.

What we do know is that about 40 percent of homeless youth identify as LGBT, according to a 2012 study by the Williams Institute at UCLA. For this vulnerable population, the hardships of couchsurfing, living in a car, or surviving on the street are compounded with homophobia, transphobia, and legally-permitted discrimination.

Moore, who has been dealing with issues of homelessness since they (Moore prefers gender-neutral pronouns) started working in LGBT advocacy in 2005, says that little could be done for those kids until now.

“We’d have to refer them to Myrtle Beach or Florence where there was shelter,” Moore says. “They’re not in their own hometown where their support system is. You send them to a whole different town, and it’s really kind of an isolating thing.”

Serving such a sensitive population will require some extra security measures.

Hours for the general population will be from 9:30 a.m. to 6:30 p.m. After that, We Are Family’s attention will shift exclusively toward those under 18 until 9 p.m. The nonprofit’s office is nicely tucked in a corner of the Meeting Street complex.

A retired FBI agent came by to make security recommendations, and Tyrale Bailey, the city’s liaison to the Mayor’s Commission on Homelessness and Affordable Housing, says that some police officers will be on patrol near the area.

“We don’t want any violence,” Moore says when asked about some of her biggest concerns. ” I don’t think this is something that has really been done at this level and at this scale in Charleston, so we’re learning as we go and that’s terrifying. We understand that we’re gonna make mistakes, so that’s always scary.”

Outside, volunteers serve soup and hot dogs to the 15-person crowd that has trickled in over the past hour. Moore’s small frame is buoyed by a weak chair, held in place by whoever is available that minute, as they ask for name suggestions for the new center.

“What about ‘Right to Life?'” someone asks.

Moore politely informs him that the name has been taken.

“I’m good with We Are Family,” offers a passing voice.