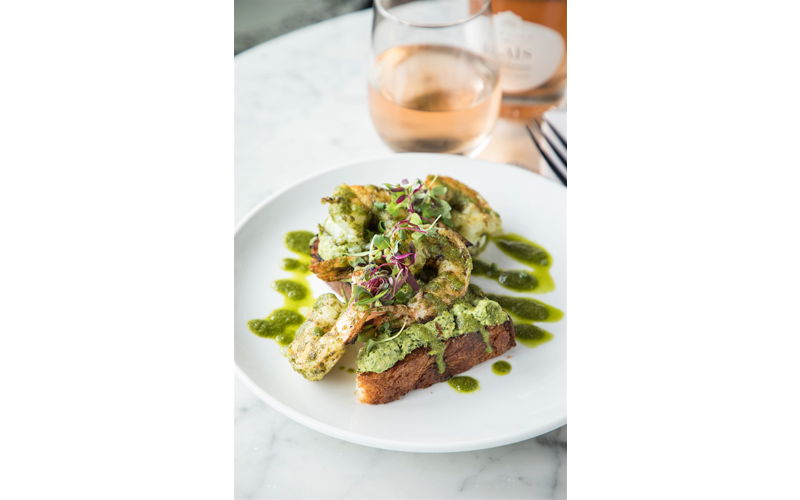 Last August, shortly after appearing on Top Chef Charleston, Warehouse’s executive chef Emily Hahn announced that she would be leaving the popular bar to pursue a new project. Soon thereafter, Chef Jason Daly took over her post. Relocating from a remote island off of Maine, Daly arguably brought some of that climate with him. (Thanks, Chef?) He’s also added some New England sensibilities to Warehouse’s mostly revamped menu, while grandfathering in some tried-and-true favorites.

Case in point, the celebrated deviled eggs with fried oysters ($7) persevere. The three creamy eggs contrast with the crisp, hot oysters and piquant homemade relish in a manner that’s simultaneously sentimental and unexpected. There really should be a movement focused on adorning more things with freshly fried oysters. Somebody look into that.

Warehouse is fundamentally a bar, offering a wide variety of beers, bourbons, and cocktail concoctions. The Dirt Nap ($9) finds the flavors of rye whiskey, lemon, and honey combined with the mint and menthol-forward Fernet Branca Menta in a way that’s medicinal, yet refreshing. In contrast, the Employees Only ($9) is made with jalapeño tequila, pink grapefruit juice, and lime. Although the anticipated bite of jalapeño gets lost in the shuffle, the drink is light and fresh with an occasional, pleasing burst of grapefruit pulp.

If the presence of any artisanal toast — let alone shrimp toast ($13) — prompts a “Toast? Who the hell pays $13 for toast? I knew how to make toast when I was three years old,” reaction at your table, you are not alone. But hear me out. Daly’s four shrimp pack a rich, balanced punch atop the hearty slices of bread. Although I prefer finger food that doesn’t require messy tail removal, it’s worth the work, as the spinach, artichoke, and Parmesan flavors complement the seafood and are beautifully rounded out by the zesty gremolata.

The vibe at Warehouse is laid-back and comfortable. The stylish, industrial space resonates with the greatest hits of Billy Joel, Elton John, and Michael Jackson, intermingled with the occasional crack of a pool ball. Service is friendly and affable, punctuated with “Dude, where’s my car?” moments. Yes, you might have the same, exact conversation three times, but it will be mellow and conducted with a smile.

In other news, Hahn’s fried chicken bombers ($14) are still on the menu, but with some tweaks from Daly. While the Brown’s Court Bakery mini English muffins remain, the two tender chicken breast chunks are now coated in a lemony shaved kale and cabbage slaw and dotted with bacon lardons. Sweet, salty, and stupid sloppy, this is why the good lord invented bar food.

Warehouse offers but three entree options, and the fish and chips ($17) seemed like the best way to sample the Maine stylings of the new chef. The large, flaky filet of North Atlantic cod arrived ensconced in its Kronenbourg beer batter and perched atop a mountain of shoestring fries. Sadly, this plating decision exponentially increased the falling apart factor, as the rising steam from the fries quickly rendered the once-crisp breading mush. Although I didn’t really understand the presence of the undressed butter lettuce side salad, the resulting dish is still a capable version of the pub classic.

Yes, Warehouse is intrinsically a drinking establishment. But if you should find yourself with a hankering for cozy bar food in a hip environment, while simultaneously requiring cloth napkins and duck confit, it could very well be the amicable compromise you not only want, but need.