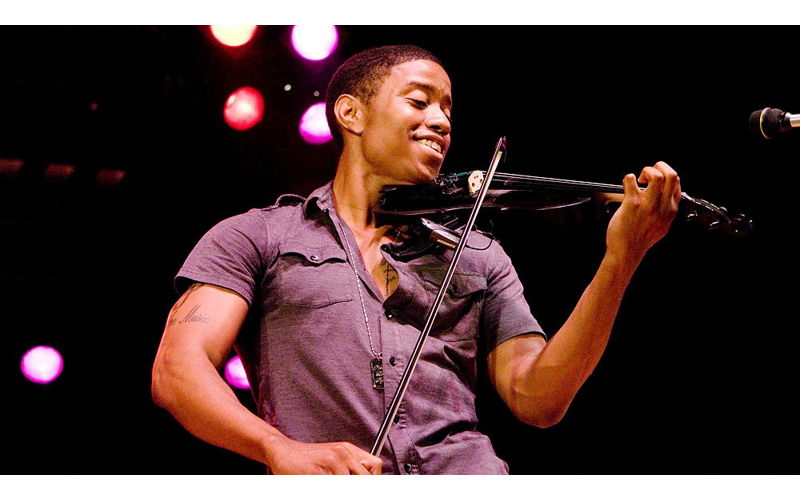 The beginning of contemporary violinist Daniel Davis’ story has been told plenty of times before. The Cliff’s Notes read: He was a teenage violin wunderkind who stole the spotlight at weddings until he began stealing the spotlight at small local arts festivals. By 2007, the Charleston native built up enough steam to score spots on the bills of MOJA and Spoleto. Ready to feel like shit about the life choices you’ve made? He was only 18. Now 28 and living in Denver, he’s returning to his hometown to show everyone what he’s learned in his time as a musical journeyman, which (hate to spoil it for you) is a lot.

The past decade has treated the performer better than a lot of folks expected, thanks in large part to Davis’ malleability as an artist. He’ll flow from R&B to jazz, hip-hop to classical. “I can play anything from hip-hop, rap, I can still do bluegrass and country and whatnot, and I play classical every day,” says Davis. “I like to say I still don’t have a set lane, yet.” That stubbornness against definition has proven lucrative — just look at the shows he’s played.

Throughout the last 10 years, Davis has toured the nation, scored a viral hit or two, and lit up the jazz festival circuit in Charleston, Denver, and Atlanta, just to name a few. All the exposure and praise scored Davis an odd mixture of gigs: pro sporting event halftime shows, the premiere of Jamie Foxx film The Soloist, and even as the opening act for rapper and professional egoist Kanye West. He attributes all of it to his outstanding social media presence and those previously mentioned viral videos. “I did not know YouTube was going to be that big,” Davis recalls. “I was just posting videos because I was bored.”

The various venues Davis regularly takes over are a testament to how adaptable of an artist he’s grown into, but they don’t really show a lot of his work’s nuances in instrumentation. Despite his main identifier being the violin, Davis actually started out in production thinking his now-signature instrument would take a backseat. That didn’t happen.

Read most articles on Davis and you’ll find the pattern. People harp on him being a fiddle player in the world of modern pop or his covers of hit songs, but widening the lens on Davis shows him to be a much more versatile artist than a lot of people realize. “It’s so hard, especially now, to describe what a genre really is. Everyone wants to get particular.”

That headspace applies perfectly to his original music, not just in the style, but in the instrumentation. “There are other things that I do that I feel like are just as good or should be seen as the violin,” he says. Tunes like “Symphony” and “Let’s Go,” both from his 2010 album Serenade, show R&B-inflected keys and electronic vocals vying with the violin for the lead. “To me it’s not new, because I see violinists do this stuff. To the masses and the mainstream, it’s still a new thing.” Much of Davis’ music features him playing all featured instruments.

There’s even an odd socialization between the guitar and Davis’ playing style. Often, he’ll fiddle around with guitar effects, like distortion, wah, and flanger, to find new plateaus for the violin. He hopes to strum up some of that spirit for his Piccolo Spoleto show this year, while still keeping things decidedly jazzy. “Jazz, as well as classical, are genres that aren’t dying per se, but they are suffering. They need innovators to help take them further,” says Davis. “If I can connect other young people to keep the fan base growing, I would definitely like to do that.

“I’m trying to break out of the form of what people think jazz is — like, just background music or you have to have caviar or something with,” he adds. That’s only one of the ways that Davis is continuing his growth as an artist. “When I think about the projects I’ve put out, it makes me want to go back more to my roots … I want to create a solid all-originals album.”

Alongside the album of exclusively original material, a live DVD is another shore Davis wants to land on. “If I can show them something live, I think that will connect with them a little bit better.”