Don’t Shop at Them Chain Stores 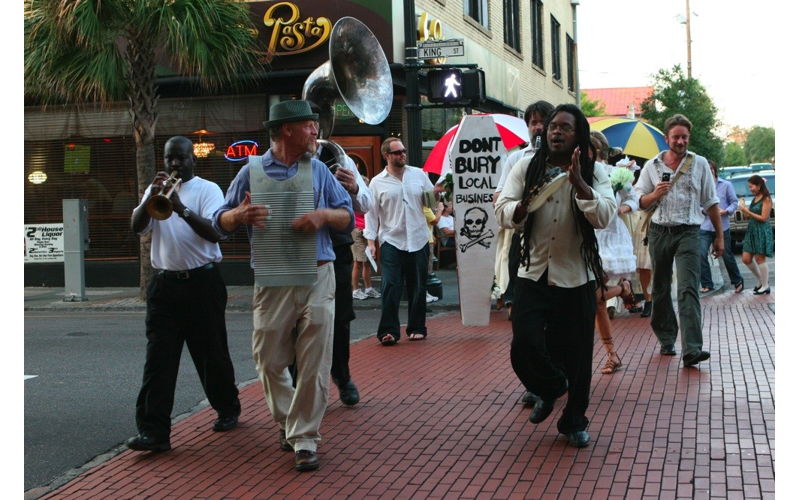 The dirge from downtown’s Bus Shed was small but enthusiastic, as members of Lowcountry Local First, led by New Orleans-style musicians, celebrated the deaths of Holy City businesses. Ladies in old-timey white dresses held umbrellas and danced as they marched, much to the confusion of a Thursday night King Street crowd, who paused to take cell phone pictures and wonder just what the heck was going on.

The funeral procession made its way to 501 King St., where they were met with protestors from big box stores, who encouraged onlookers to shop at Walmart. The inside of this empty retail space was transformed into a tent, complete with pews. At the behest of Karalee Nielsen, the congregation rose and recited the LLF mission statement from their programs.

Cary Ann Hearst led us in the first hymn, “We Shall Overcome,” and then “Reverend” Dana Mitchell, playing preacher, took the podium and sermonized about the importance of shopping local. “Stay out of them chain stores,” he thundered to the audience. Mitchell invited members of the business community to come up and testify; one wiped sweat from his brow and praised Firefly Vodka and Oak Steakhouse.

The night was temporarily interrupted by a protestor who snuck inside, shouting at us about his work as a Walmart greeter, but the brave reverend was able to save him, and the man tore his blue vest off his body. Hearst returned to the stage with her 10% Shifters, singing “Don’t Shop at the Chain Stores.” Can I get an amen?