Video: How to Host an Oyster Roast 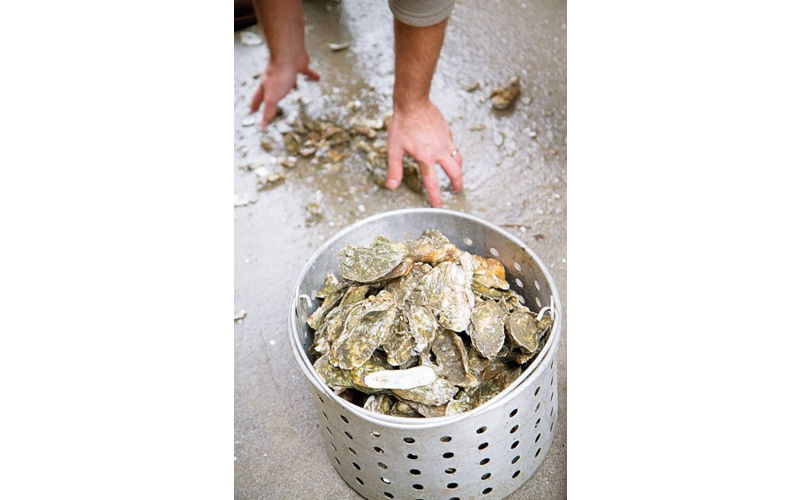 In 2007, Matt Lee and Ted Lee appeared on an episode of Anthony Bourdain’s Travel Channel show No Reservations. They were tasked with showing Bourdain how to host an oyster roast, which they did quite admirably. They took him to Crosby’s Seafood for some local clusters, and then they headed down to Edisto where they roasted them over a fire pit, creating as authentic a situation as a couple of Yankee-born fellows could hope to do. The trouble began when, instead of cracking open a cold can of beer, they served Champagne. Granted, they poured the bubbly into jelly jars. But still. They poured Champagne at an oyster roast, and everyone around here knows you don’t serve anything but cold, cheap lager at an authentic oyster roast. To this day, they have yet to live that moment down. When Bourdain came through last year on his book tourand the Lee Brothers’ names came up in the Q&A portion of the evening, the crowd pummeled those boys for that Champagne faux pas — four years later. That’s how serious we are about the oyster roast tradition. Local food writer and City Paper contributor Jeff Allen says, “It’s a sanctified ritual. People don’t appreciate creative deviations when it comes to the liturgy.”

In addition to cold beer in a can, an authentic Lowcountry oyster roast requires many things, the most important of which is a nip in the air. You can’t host an oyster roast when it’s 70 degrees outside. You just can’t. Oyster roasts require cold weather to feel right. Guests should be bundled up, huddled around the fire pit, waiting with knives in hand to go at a steaming pile of local clusters. It’s just how it’s done.

So, when it’s properly cold outside, call ahead to your favorite local seafood purveyor (we like Backman’s Seafood on Sol Legare and Jeff Spahr at localoysters.com) and reserve yourself a bushel or two (one bushel is good for about six to eight people to get their fill. If they’re hardcore, go ahead and order two). Get the local clusters. As Allen says, “You got to have pluff mud on your oysters or you’re not doing it right.”

You will also need a place to cook your oysters outside. The old school way is to cook them in a specially built backyard oyster roasting pit. Made of brick, these old fire pits are shaped like a horseshoe with a chimney at one end and do a fine job of roasting oysters. If you don’t have a fire pit, you can make one using cinder blocks and a flat steel grate. The grate is essential, Allen says, because the flat surface allows you to spread out the oysters and cook them more evenly.

Before you throw your oysters on the grate, rinse them a bit with a hose. Don’t pressure wash them. A little dirt is good, but you’ll be filthy if you don’t run the hose over them and remove the caked mud.

The best way to get your oysters on the grate is with a big straight-edged shovel, like a snow shovel. Dump them on the super-heated grate and then cover them immediately with a wet burlap sack or two. The sack should not be drenched, but it should be wet enough to steam the oysters and not catch fire.

“The most important thing is not to overcook them,” says Allen. “The perfect steamed oyster is when it’s warm inside but it’s still juicy and briny.” In other words, if the shell is popped open and the little bivalve is all shriveled and dry, you’ve overcooked them. Timing is part of the art of cooking oysters. Expect it to take less than 10 minutes to get them right.

Once the oysters are perfectly cooked, dump them onto a big table, long enough for your guests to huddle comfortably around. You can cut holes in the middle and put a garbage can underneath for the shells, or you can just have a big can nearby. Either way, make sure you call the Department of Natural Resources (843-953-9397) afterwards to find the nearest shell recycling bin. They take the old shells and quarantine them for six months before dropping them back into the creeks to make new oyster beds.

But let’s get back to the roast. At the oyster-eating table you should have some essential items on hand: oyster knives, towels or gloves for protecting your hands (as they say around here: “It’s not a good oyster roast until somebody bleeds”), a hot sauce of your choice (Texas Pete, Tabasco, Crystal), cocktail sauce, saltine crackers, and beer. Lots of cold beer. It’s pretty simple, really. For first-timers, it’s best to get invited to a couple oyster roasts so you can see what it’s all about before hosting your very own.