Video: How to Dress a Deer 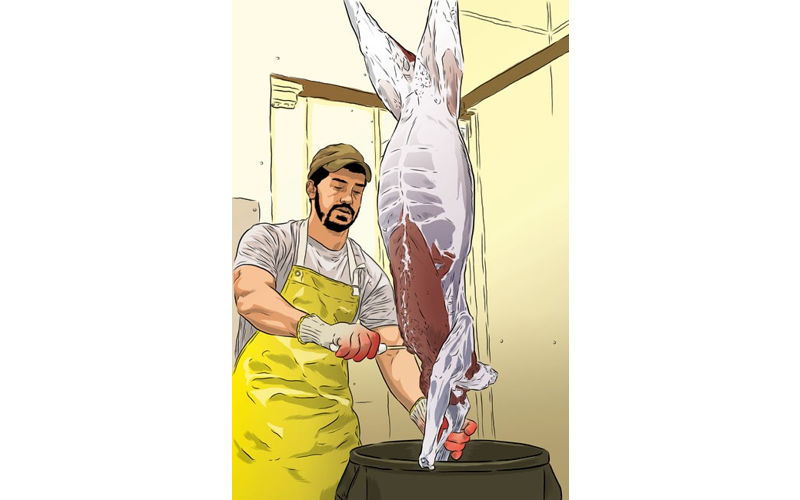 Warning! Dressing a deer is not as cute or as fun as it sounds. In fact, if you believe Bambi is one of the saddest movies of all time, this article isn’t for you. On the other hand, if hitting the woods with a Remington is your thing or you have a wrought-iron gut and curiosity to match, read on to find out how to get that 8-point buck you just shot from the forest to the fridge.

As a guy with zero “kills” (and even fewer deer dressings) under my belt, I knew a little research was in order. Better yet, I thought, maybe I should consult someone with a solid handle on the intricacies of the procedure.

Michael Cordray and his family have been processing venison for hunters since 1990. It’s not a very glamorous procedure, and many hunters understandably prefer the convenience of paying someone else to do it. I decided to visit the Cordray’s Ravenel farm for a firsthand demonstration. My guide: Kenneth Cordray, Michael’s son.

Kenneth led me to a large, sparse room where, sure enough, two deer lay waiting on wheeled, stainless-steel tables shaped like Vs.

According to Kenneth, the hardest part of cleaning a deer is keeping it clean ­— that means that the dirt and gutshot must not come in contact with the meat you plan to eat. Shot placement is also very important and can control the yield you get from the deer that you shoot.

First off, there will be some variations on this process. Field dressing a deer, as the term implies, is done in the field (a.k.a. the woods) primarily to cool the meat quickly by removing the internal organs that generate heat. Whether you do it in the field or haul your deer elsewhere to dress, the main thing to note is that unless you’re hunting in sub-freezing temperatures, time is of the essence in order to preserve the meat for later consumption.

• Anywhere from 5-30 minutes depending upon how proficient you are.

• A sturdy container or trash bags to dispose of the unused parts.

How to do it

Begin the process by flipping the deer onto its back, since your incisions will be made on the deer’s underside. Here’s how they do it at Cordray Farms:

1. With the deer elevated and on a clean surface, hose the dirt and mud off to better keep the meat clean.

2. With a sharp knife, cut a circular groove into the hide that goes all the way around the lower part of the deer’s back leg. This allows you to get the knife tip into and under the hide for step 3.

3. Make an incision on the inside of the back leg and split it straight up toward the belly, pulling the hide away from the meat.

4. Move your knife to the other side of the leg and cut down toward the hoof, trying to keep any hair and dirt away from the flesh.

5. Cut the two tendons on the backside of the leg and pull and snap the lower leg off. It should detach thoroughly without needing a saw.

7. Go to the front legs and cut behind the knot where the joint is. The lower leg should detach as you cut through. Repeat with other leg.

8. Move to the back of the animal and move the knife toward the front of the deer, through the hide covering the belly, being careful not to cut too deep into the guts.

9. Move back to the front and make a deep incision into the breast of the animal, then cut up to the neck. At this point, the hide should be ready to be stripped from the deer. This is where the process may take a turn for you depending on the equipment that you have.

10. Clamp/secure the hide (Kenneth used a vice grip connected to a chain) and begin hoisting the deer slowly and steadily upward by its legs (again, Kenneth used a mechanized lift of sorts, but you could do the same by securing the head or feet with rope and tugging the hide in the opposite direction using steady force).

11. Take your sharp knife and cut away the skin where it remains attached.

12. To remove the head, hold it with one hand while cutting into the socket where the neck and head meet.

13. Cut away the shoulder meat to keep it clean while also trimming out any “blood shot” where the bullet went through.

14. With the deer still hanging upright, cut downward into the brisket and then make a long slit in the belly near the hind legs. This is where the guts and esophagus should basically come spilling out.

15. Hose off the meat and refrigerate.