Valhalla Rising is visual and violent 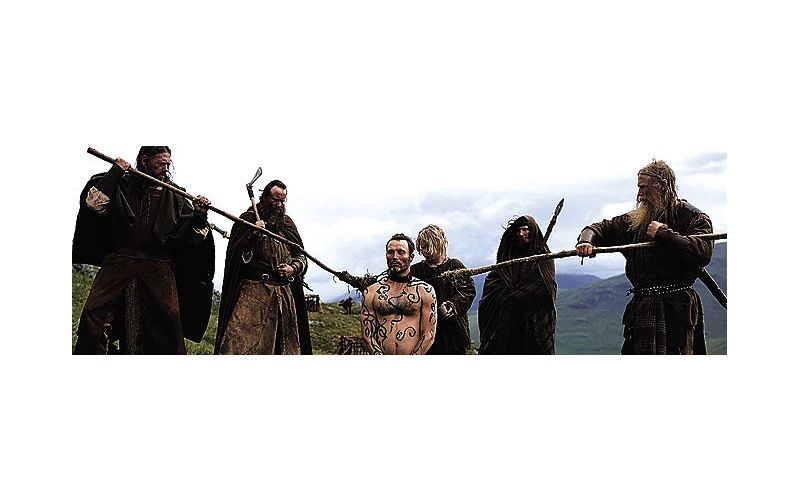 As the movie draws to a close, John Boorman’s 1981 fantasy epic Excalibur attains a beautiful calm amidst the afterglow of carnage. The knights pierce each other’s armor with swords and their blood shines through the dense layers of mist. Essentially, Nicolas Winding Refn has achieved the same tone, albeit a tad bit muddier, quieter, gorier, and slower, with his latest effort, Valhalla Rising.

Recently, there have been quite a few movies that utilize the fantastical elements of a time period to create new cinematic worlds; 300 and Clash of the Titans are but a few of the more popular examples. This time, Valhalla Rising focuses on the 1000 A.D. era. Mads Mikkelsen (Casino Royale) plays our main character, One-Eye (named because he has, well, only one eye), a sullen and mute Norse warrior with very little to look forward to each day. As a prisoner, his days and nights are spent chained to a post in the misty highlands. With the exception of a young boy named Are (Maarten Stevenson), the only other bright spots in his existence are when the mysterious mute regularly fights other criminals to the death and when he escapes to the comfort of his feverish, psychic dreams.

It doesn’t take long before one of those dreams extends a present to him: a discarded arrow at the bottom of a waterbed. One-Eye uses this newfound weapon to free himself and slay his captors. Like Short Round to Indiana Jones, Are accompanies One-Eye on a journey that eventually leads them to a small group of Christians who are committing themselves to the Crusades. As they embark for Jerusalem, One-Eye’s dreams become more intense and the pack of Crusaders begins to crumble with each passing moment. The quest to the Holy Land becomes less of a reality as each member of the group falls victim to their own fears and paranoia. At this point, it should be noted that there are a lot of stabbings and guttings, so viewer beware.

Essentially, Valhalla Rising, told in six chapters (with titles like “Hell” and “Wrath”), trudges from one morose scene to another, much like John Hillcoat’s film version of The Road. Though the acting is pretty common for films of its ilk, it is Mikkelsen’s silent portrayal of One-Eye that takes Refn’s movie past its bleak story line. And whereas Refn’s last film, Bronson, shared more than a mild similarity to Stanley Kubrick’s bleakly humorous A Clockwork Orange, his latest feels like a Terrence Malick vision of the Christian Vikings and the Crusades. The accents are thick and the all-male cast may give the viewer a case of Braveheart fever, but that is as close as we come to Mel Gibson’s popular film. If anything, Vallhalla Rising‘s tone and rampant bloodletting share more in common with Gibson’s other works, The Passion of the Christ and Apocalypto.

As with his previous releases, Refn’s inclination toward beautiful visuals is unsurpassed. From the dirty grit of his Pusher trilogy all the way up to the loony vibrance of Bronson, Refn knows how to communicate with the camera and his economic use of words can be mesmerizing. It’s a rare film that can make a head resting on a pike in the middle of the highlands seem peaceful. Valhalla Rising‘s lush photography can also be off-putting for a viewer wanting more visceral thrills with their action. While the film’s foreboding score churns away and cinematographer Morten Søborg derives beauty from the ugly savagery on display, Refn weaves through the narrative like the Stations of the Cross with chapters devoted to each morbid event.

Valhalla Rising trumps quick edits and annoyingly endless yelling for sedentary compositions and quiet, wearied exchanges. Unfortunately, the moments of raw violence don’t always mesh with the film’s self-important nature and molasses-fueled pacing. While any film that works as an anti-300 should be commended for attempting to bring a more thoughtful perspective to the atrocity of conflict, it can’t run on good intentions alone.