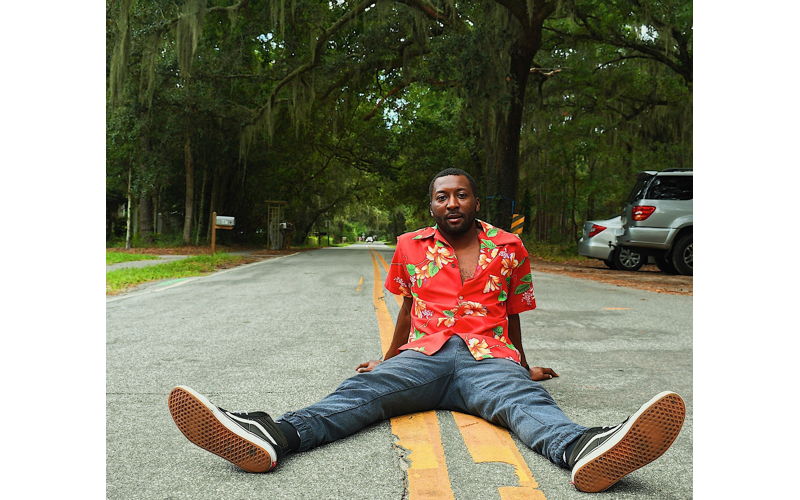 Charleston rapper Tyrie Young’s Season 1 is one of the most delightfully disorienting releases you’ll hear this year, in hip-hop or any other genre. His beats seem refracted through a series of funhouse mirrors, never solidly in one place or another, and never quite in normal focus. The tracks, almost all of which were recorded by Young in his home studio, are skeletal and off-kilter, with just enough programmed percussion and synths to frame his vocals.

Everything’s a bit off-center, with autotuned melody lines rocketing back and forth between the listener’s ears and lyrics that are more like impressionistic phrases than complete thoughts. By the time the weird brilliance of lines like “Blue face/I wanna move with it,” or “I don’t need a cheat code to whip yo’ ass,” land in your brain, Young is already on to another idea, crooning or rapping his lines with an unaffected confidence.

Taken as a whole, Season 1 is a dizzying, bewildering, and compelling experience, which is exactly how Young intended it.

“It’s very random and sporadic,” he says, “and that’s how I feel life is sometimes. You’re going down one path, trying to tell one story, and something happens that doesn’t pertain to the story at all, you just kind of go off-script for a bit, and hope the new things stick. It’s weird, and I think that it works well, because we live in a time where it feels like everything has to be structured, and I’m trying to be unstructured.”

In a world of hip-hop that’s often rooted in heavy bass and beats, Young says he wanted Season 1 to catch people off-guard.

“I feel like music should change your perspective,” he says. “And if my music catches people off guard, I want it to. I want it to catch them and make them think, ‘Did this guy do this on purpose? It’s good, but why would you do it like this?’ And I feel like that makes it more interesting.”

Young has been crafting that unique vision, one that was influenced by OutKast’s universe-creating approach to rap music, for years, moving from Florence to Greenville to Charleston in an effort to find the right music scene to support his ideas.

“I’ve been trying to get my album out for about two years,” he says, “and I thought if I moved down here, I would probably be in a place where artists could help me find my own way. Being in a place like this with so much culture, I thought I could really fulfill the album all the way to its full potential. I didn’t imagine that it would take as long as it did, but it came around when it was supposed to come around.”

When he arrived in Charleston and began taking in the local scene, Young found the inspiration to complete Season 1‘s unusual brew in a perhaps unexpected place.

“Charleston has a very heavy rock scene,” he says, “but it also has this underground rap scene that derives from the Southern trap genre. Coming to Charleston where there was a bigger scene, I felt encouraged to go into the roots of psychedelic rock and heavy synths and using that, more so than the traditional trap or heavy bass sound. I really just pulled different genres together from being in this culture. I tried to perfect this different style because I feel like we’re in this time where, to be catchy as an artist, your style has to be so different.”

Perhaps the most surprising thing about Season 1, beyond its musical worldview, is how crisp the sound is, given that it’s essentially a home recording, even if Young himself feels that he recorded it at home due to necessity, more than his artistic inclinations.

“I don’t really get a chance to get into a studio, because of finances,” he says. “But I wanted to show people that if you really want to make something happen, maybe you should just do it yourself.”

Next time out, though, it sounds like Young has bigger plans. “I called the album Season 1 because this is the season of life that has brought me from my hometown of Florence, through Greenville, and to Charleston,” he says. “And I feel like this is the sound of me right now, of all of the things going on in my life. Season 2 will hopefully be more refined.”