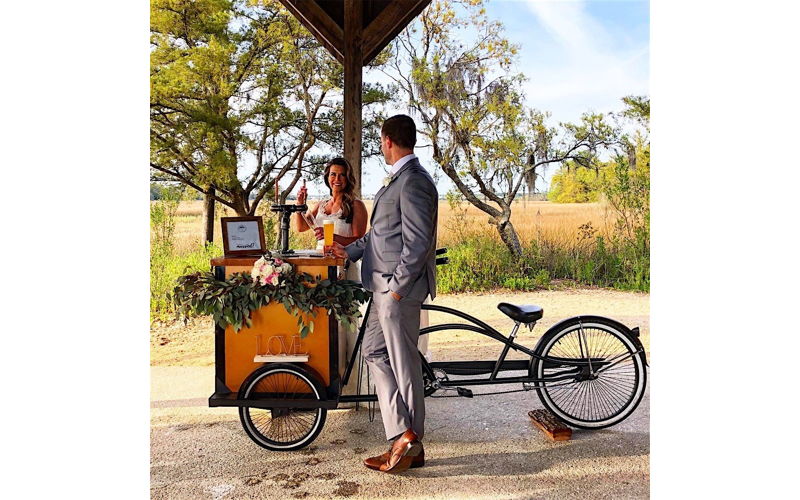 On Feb. 2, Punxsutawney Phil, forecaster and Pennsylvania groundhog, did not see his shadow. If you believe in the legend, that means we can expect an early spring. It also means event season is upon us.

In honor of Dish, and on the cusp of balmy weather, we sat down with local libations purveyors, Sweet Lulu’s Cocktail Caravan and Pedal Pub and Icebox to talk specifically about their work — what it takes to pull off the perfect event as Charleston’s popularity as a destination city surges, and what some of their greatest challenges are as business owners.

Karen Moran, owner of Sweet Lulu’s, was born and raised in Chicago, but after getting fed up with the cold, moved to Charleston in 2005. “At the time I was in the corporate world doing advertising and traveling all over the country.” After leaving the corporate life, Moran moved to a small island in Florida she’d visited in her travels called Matlacha and came up with the concept for Lulu’s.

“It was literally on the end of a dock and my marketing background kicked in. I sat there and watched people pull up in boats and open coolers full of ice and food, but no one was bringing dessert.”

This moment would spur the core idea for Lulu’s Bakery, a company focusing on savory and easy-to-go desserts that can be stored and served in mason jars. Now in addition to sweet treats, Lulu’s features three cocktail caravans that provide bar service for a wide variety of events, and Pedro, Charleston’s only pedal pub available for private catered events. For those who don’t know, a pedal pub is basically a bicycle with two taps for beer, wine, or craft cocktails. “You can get your cakes, you can get your desserts, and you can get your bar service,” say Moran, who generally staffs three to four people for an average local event.

While Icebox owner Christopher Laine, and director of sales, Emily Fralinger, might have more conventional origin stories — both had extensive food and beverage experience before joining Icebox — they say their business model is unique in its own right.

“We are a beverage service so you hire us to come in and handle strictly the bar side, if that includes wine service or a Champagne toast or what have you. We are unique in the sense that we are a stand-alone in that,” says Laine. Icebox employs five full-time folks who “make it all happen between Charleston and Greenville” says Fralinger, plus “an endless number of bartenders who work the events.”

“For an average sized event for 150 people we would have a front of house sales person handle the booking, our warehouse ops manager would pack and stage the event making sure we have all the product and gear needed to execute the event, and then (assuming one bar location) we would typically have two bartenders and a barback. This varies with the complexity of the event.”

Situated in a warehouse off of Azalea Drive, Icebox has a full lounge and bar where they host tastings. “The tastings are my favorite part,” says Fralinger. The room itself looks a bit like a W hotel lounge.

Sometimes, Fralinger says, people forget to confirm their orders in the rush and din of planning an event: “We’ll get a call from someone asking when we’ll be there — and they never confirmed the order.” When the inevitable happens, having that Greenville location comes in handy as usually between the two crews they can meet the demand even on short notice.

Although Icebox typically handles larger jobs — they also coordinate events for corporate clients nationally, where thousands are in attendance — they share a lot with Lulu’s. Both groups, unlike traditional full-scale caterers, often don’t meet their clients in person until the day of the event, which means establishing trust on both ends is imperative. When it comes to throwing or attending a big shindig, is there anything more critical than a well-run open bar?

“An overwhelming proportion of the requests come through the website. I try to push people there because I am a one-woman show and I don’t have an assistant or anything like that. I am very transparent so I have all of my pricing and packages online,” says Moran.

From there, typically, Moran goes back and forth a few times with the client about what they want. “They just send an email and an overwhelming majority of the time they book without a tasting.” It is therefore not uncommon for Moran to see the client face-to-face for the first time at the event. The same is true for Icebox, “It is very rare that we would have facetime with a client.”

Both also feel the woes of the food and beverage staffing crisis. “For the first time in a long time it seems the employers need people more than people need the employers,” says Fralinger of the challenge of not wanting to simply staff their events with warm bodies, but to find qualified and skilled people.

It is a problem Moran says she experienced as a growing pain over the busy summer season: “I found a brick and mortar space downtown and was super excited about it … Having staff work that location as well as staff in my commissary kitchen … it was just too difficult finding reliable people.” When the landlord later told her she could not build a kitchen there, she took it as a blessing in disguise.

Come hell, high water, or too few bodies to man the ship, according to ol’ Phil, spring and summer are coming in hot. According to Laine, the flavor for this spring is strawberry — think a spiked freshly mottled strawberry lemonade. “Strawberry and thyme lemonade. It is not the same cocktail as what you get when someone uses strawberry flavored vodka.” He also mentions blood orange as a good transitional cocktail option as the temperatures rise. Moran is working with fresh herbs, too, with a newly designed Champagne cocktail infused with rosemary.

For the future, Moran would still like the brick and mortar location. “Right now I have to rent commissary. Eventually I would like one stop shopping — my kitchen, and a small little storeroom where people come in and sit down.” Icebox is less certain of making any changes just now: “Until we feel we can move or grow and maintain the level of service at our current locations, that’s when the move would be more comfortable.”

Find out more about how you can hire these industry pros for your next throwdown by visiting sweetlulusbakery.com and iceboxbar.com.