From Freedom to Slavery 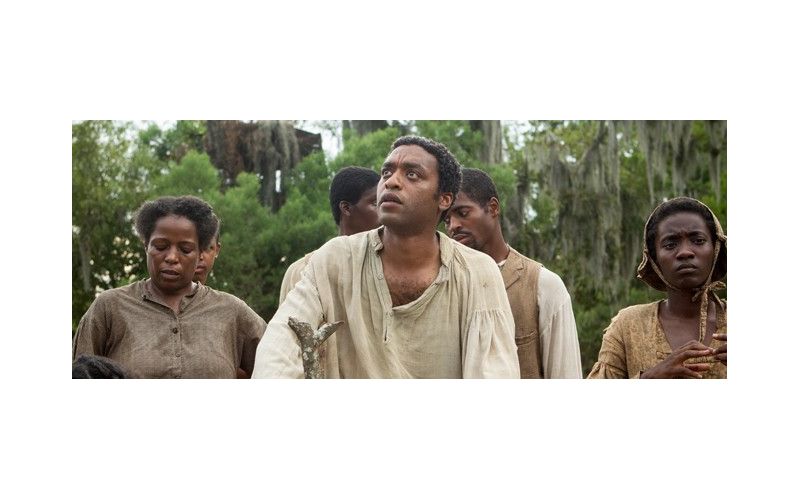 Slavery, that indelible stain on American history, has seen many renderings on celluloid, from the misguided pro-South, silent masterpiece by D.W. Griffith, Birth of a Nation (1915), where Klansmen are cast in a heroic light, to Quentin Tarantino’s revisionist fantasy Django Unchained, where the Klan are little more than Keystone cops in hoodies and an armed and emboldened slave rains down his wrath on skin-trading vermin. Both are cinematic achievements in their own right, but neither gets at the foul plight of working day-to-day under an overseer’s whip. Stanley Kubrick’s Spartacus came close, but that sweeping epic took place centuries ago, long before the pilgrims hit the shores of Massachusetts and our European forefathers began their policy of treating non-white people like pests and livestock. The good (or grim, as it may be) news is that director Steve McQueen, who is black, British, and an auteur of recent reckoning, goes at the matter in 12 Years a Slave in a fashion that gets under the viewer’s skin. Uncomfortable as it may be, McQueen skips the history lesson and achieves a visceral experience that will surely be known as the definitive moral rendering of an era that should only be recalled with remorse and shame.

McQueen’s last movie, Shame, plumbed the torments of a sex addict trying to come to terms with himself. In Slave, Solomon Northup (Chiwetel Ejiofor giving a more than Oscar-worthy performance), a free black man living in antebellum upstate New York, is also a tormented soul, but his torments are not self-inflicted. They come at the hands of amoral slave traders and a sadistic, bourbon-soaked plantation owner bearing a cat-o’-nine-tails.

How, one might ask, did a free man in the abolitionist North come to be a slave? Northup’s ordeal really happened, though the film, based on his 1853 memoir, plays loosely with the circumstances that delivered him into slavery. Quickly, we learn that he’s an educated man, a talented violin player, and has a family and a revered reputation among both black and white in his community. We hardly soak all this in before he’s hastily introduced to two traveling performers who want to recruit him for a well-paid, short-term gig in Washington, D.C. After a handshake, we see Northup with the two men dining and drinking in some fine establishment. It’s the last time Northup’s face bears a smile. Next, he’s throwing up in an alley, and then waking up in chains in a hellish dungeon right out of a cheap horror flick.

It’s here that McQueen makes his most stinging social observation, as the camera slowly pans up and out through the grating of the cell and over a brick wall to reveal the Capitol in the near distance — it’s remarkable to see such injustice in the shadow of an emblem of justice.

While questions of Northup’s incarceration persist (who are his abductors, what drives them, and how could Northup be so naive?), the film delves into the denied existence of the slave as Northup and others are covertly boarded onto a steamship and sent to Louisiana where they are sold at a slave market (with Paul Giamatti as the head trader).

Northup, who is given the name Platt, quickly learns that to appear educated or protest his incarceration only means a lashing, and from then on it becomes a sheer matter of survival. He tells one grieving woman, ostensibly once free herself and separated at auction from her son and daughter, that she needs to get over it and save her own skin for as long as she can. Northup is initially sold to a benevolent owner (Benedict Cumberbatch) who allows Platt to engineer the fording of lumber down the bayou to make the harvesting process more efficient, which enrages the short-fused overseer (Paul Dano, really coming into his own) and leads to Northup’s near hanging.

Platt’s then passed on to a drunken cotton plantation owner (Michael Fassbender, who starred in each of McQueen’s previous features) who regularly beats slaves so gruesomely it’s vomit-inducing and freely takes his pleasure with young slave women, much to the protest of his equally turbulent wife (Sarah Paulson). In short, it’s a hell where abuse comes from all angles and there is no right or safe path to stick to. All one can do is endure.

How the ordeal comes to end is somewhat redemptive, but not just. If you’ve ever seen Amistad and recall the disturbing scene on the ship where slaves shackled to each other, some weak, some fit, and some dead, are dumped into the ocean, you’ll know what kind of grim nuggets of inhumanity to expect in the middle third of Slave. As a viewer, you can’t escape the oppressive torment of the bayou’s bugs and humidity, which McQueen serves up as a sensual feast akin to a gauzy Terrence Malick immersion. It gnaws at you the same way the American tragedy relayed through the eyes of one man does.

The power of Slave lies in that it’s not a rote plea to “never forget,” but an invitation to understand the horror.