TV on the Radio fine-tunes the reception 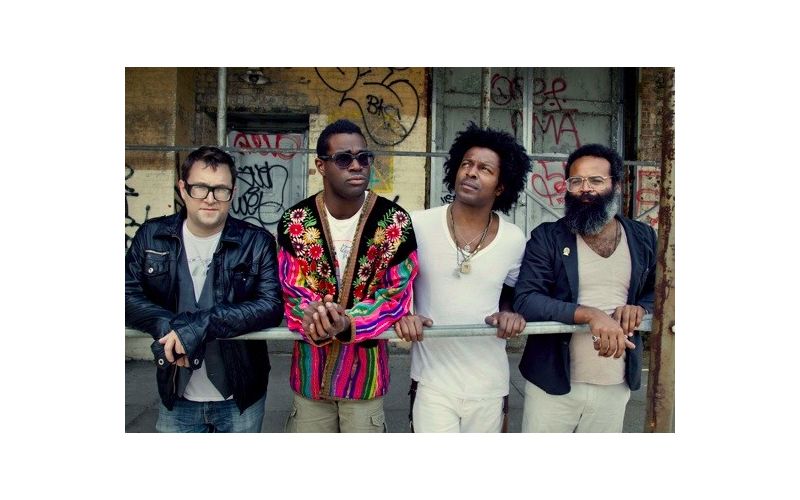 Brooklyn art rockers TV on the Radio were working on their fourth studio album, Nine Types of Light, when guitarist Kyp Malone had an experience that demonstrated the difference between recording in New York and Los Angeles. Standing in a coffee shop, he was struck by something he saw.

“There was this young girl whose face looked all beat up, and my heart dropped, seeing her there sitting with her mother and her lap dog,” Malone recalls. “I was thinking about how terrible the world is and in this culture how much of a secret it is how much violence there is against women. Then I realized she was just recovering from a nose job.”

Such ambiguities surround Malone and his bandmates; their sound is equally elusive to capture with words. Given their idiosyncratic vision and tendency to blend samples and electronics with rock, a Radiohead comparison works well, although, one might just as easily compare them to other experimental prog-inflicted acts like Animal Collective or Akron Family. What often separates TV from those groups is their grace and soulfulness. Even during the noisy stretches of their early albums, they displayed an organic sense of space and proportion.

With their previous release, 2008’s Dear Science, TV on the Radio pruned the windier branches, brightened the melodies, and excised much of the excess sound, producing a more streamlined pop visage of themselves. It’s certainly not Rihanna, but it’s not far removed from classic Peter Gabriel.

Their latest, Nine Types of Light, seems to build on that, mining deeper into their funky substratum. It feels crisp and direct with a strong backbeat. Malone, however, doesn’t see it like points on a trajectory.

“I feel like there isn’t one direction, at least, I hope,” he says. “Whatever comes next, I would hope there’s an elasticity in us that will allow us to explore whatever direction.”

On a sad note, longtime bassist/keyboardist Gerard Smith died in April from lung cancer at the age of 36, just a few weeks after the album’s release. Smith had played and written on their last three albums. His loss has left the band understandably shaken, and they’ve specifically refused to address the issue with the press.

After touring behind 2006’s Return to Cookie Mountain, the band decided to weed out some of the noise and concentrate on presentation. That’s certainly the direction that’s preoccupied them as of late. They’ve trimmed the wild aspects into something more presentable and manageable. It’s a mindset that Malone describes almost like an infection.

“A chorus or keeping something under four minutes — none of that ever even occurred to me as anything to care about or think about before being on a label that was trying to put us on the radio,” he says. “Market forces never came into my mind and now they’re kind of insidiously there. There’ve definitely been times in my life when a 12-minute improvisation on wax did not seem at all self-indulgent. It seemed like that was how much time was needed for the thing to come out. I want to get back to somewhere in-between that and not looking at songs too pop-traditionally.”

One key to the TV on the Radio’s creative happiness has been its ability to pursue other interests away from the band, which they’ve taken full advantage of. After Dear Science, the band took an extended break, its members going off in different directions. In 2009, Malone released a solo album. Meanwhile, multi-instrumentalist/producer David Sitek moved to Los Angeles, opened a studio, and released his solo debut.

“It’s one of the most incredible experiences I’ve ever had,” Malone says, adding that he sees it as benefiting the band as a whole. “The more we play with other bands, it expands our palette. Increasing music experiences in that way … it does have a synergistic effect. You challenge yourself and potentially learn in the process.”

They cut the Tenariwen album after TV had finished the sessions for Nine Types of Light. The experience would inevitably impact future studio efforts. The whole endeavor of recording Nine Types and making his solo album has pushed Malone back in the rock direction.

“It’s been great to try to do some more delicate stuff. I feel like I’m going to save that for solo ventures,” he says. “If I have to tell someone to turn down during a song, it’s probably something for me to do. I can do it myself. I don’t have to battle for it.”