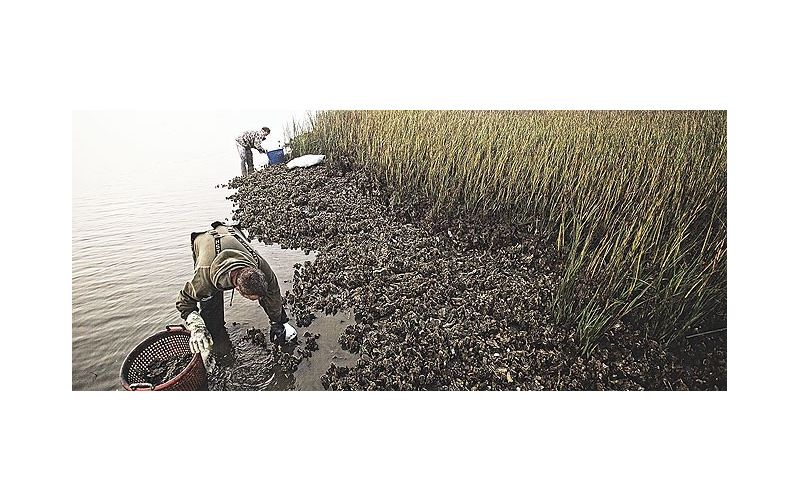 From Mud to Table

If one broad assumption could be made about our beloved region of the South, it’s that, for better or worse, we don’t let go of tradition very easily. Throughout the last 150 years or so, we’ve managed to weed out a few of the more unsavory conventions we were once known for, but holding a good old fashioned Lowcountry oyster roast during the months containing the letter R is one tradition that thankfully doesn’t seem to be going away any time soon. It’s something that folks who have grown up here don’t seem to find all that exotic; winter, whether or not it can actually deserve to be called that around here, means donning coats and drinking beer and trying not to slice your hand open while shucking oysters for hours on a Sunday afternoon — or at least hearing all of your friends bragging about it. In the words of George Motz, New York-based foodie and Emmy-award winning director of the short The Mud and the Blood, which is showing at this year’s Charleston Film Festival, these gatherings are not only about ingesting sinful amounts of the salty bivalves, but are “about family, getting together, and probably doing some heavy drinking.”

Although Motz is originally from New York, his mother’s side of the family boasts a long line of Lowcountry seafoodies. Motz himself is known for a lot of things — he’s the director of Hamburger America, the founder of the New York and Chicago Food Film Festivals, and host of Travel Channel’s Made in America; he even worked on the video for LCD Soundsystem’s “Losing My Edge.” But every two years, he comes back to Charleston for his family’s traditional Thanksgiving oyster roast. Because of his success with so many food-related ventures, his relatives suggested he make a film about their gettogethers. “At first I didn’t see the value in filming any of this, because I was so close to it,” Motz says. “It took me 20 years to figure out I needed to capture it.” In the spirit of any true modern foodie, Motz documented the entire process — from pluff mud to table — and, with the help of Stephen White and Oliver Thames, created a 12-minute film that shows everything from how Bulls Bay oysters are picked to how a family goes about putting on a roast for 150 people.

Local Bulls Bay oysterer White is related to Motz through marriage, and the two have known each other since they were kids in the 1970s. “George called me and told me his idea for the film,” White says, “and at first I thought I wasn’t going to be able to take him out picking oysters with me.” But it just so happened that a photographer from Austin, Texas, Jody Horton, was set to shoot White in the Bay on Thanksgiving morning for an upcoming book. Motz, White, Horton, and Jeff Spahr (another local oysterer) all ventured out into the muddy low tide, camera equipment in tow, and documented the oystermen as they hunted for dinner. “It was a pretty funny scene,” White says. “George and Jody kept getting in the way of each other’s cameras.”

The second half of the film shows the family enjoying the fruits of their labor, assisted in part by Thames, Matz’s uncle and a master roaster who prides himself on cooking the mollusks the traditional, but ultimately more difficult, way. “For sake of convenience, a lot of people have started steaming oysters over a propane jet steamer,” Thames says. “But we use a hardwood fire, a plate steel cooker, and cover the oysters with a wet burlap sack.”

The Mud and the Blood, whose name refers to both the oysters’ home and Motz’s family ties, was made back in 2009 and has been screened at both the New York and Chicago Food Film Festivals. Because an important part of both festivals is bringing what’s on the screen directly to audience members, Motz employed Thames to drive a truckload of Bulls Bay oysters up to Chicago to throw attendees a traditional Lowcountry oyster roast. “Most people up there only knew oysters as half a dozen on the half shell being served by a guy in a white shirt and tie,” Thames says. “They were beside themselves that we were using a shovel.”

Motz, Thames, and White are hoping to do the same thing in the parking lot of the Terrace Theater after the premiere of the film at CFF. Although many attendees will be more familiar with the social conventions of an oyster roast than at those other festivals, Motz is excited that folks will be chowing down on oysters harvested and roasted by the same people, and from the same exact location, they saw on the big screen. “I wanted people to walk away from the film with the sense that they wanted to go do that — go to an oyster roast — right away,” Motz says. “And you can’t just go to a restaurant and have an oyster roast. So we’ll throw one for them.”