Curl up with a cold one 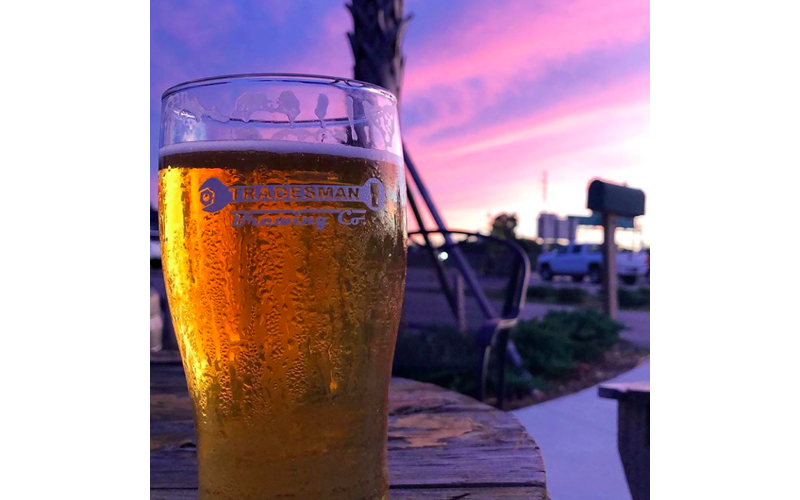 Fall in the Lowcountry might not bring the same temperature changes as it does for our neighbors to the north, but it’s still a time to pull out a light sweater and transition to some fresh new flavors.

With this in mind, local brewers are rolling out specialty brews fit for fall, with flavors like cocoa, peanut butter, and of course — pumpkin. Here are some of our favorites we’ve found around town:

Start at the edge of the brewery district at Tradesman Brewing Company, where the crew is brewing a white coffee stout called Shift Change. Co-owner Chris Winn explains that some customers tend to have a bias against darker beers, so they decided to experiment with a lighter color combined with the body you’d expect in a milk stout. “We used chocolate and lactose to give it body, and the result was a copper-hued ale with great coffee aromas and a killer taste,” says Winn. “It has become one of our top selling beers, and it’s fun to see the surprised guests when they try it.”

Craving a more classic milk stout? Look no further than Park Circle’s Commonhouse Aleworks, where the brewers collaborated with Weldwerks Brewing (Greeley, Co.) ahead of Charleston Beer Week to re-release an imperial milk stout called Vertical Shear. “The name is a nod to a weather phenomenon that diminishes the force of a hurricane,” says ‘Chief of Hoperations’ Hank Hanna, who also mentions that the brewery donated all of the proceeds from the original 2018 release to a Hurricane Florence relief fund. The 10.5% ABV stout, which is available at the brewery on limited draft and in 16 ounce four-packs, is brewed with cocoa husks from local chocolatier Cocoa Academic and conditioned with toasted coconut.

Nearby in North Charleston, Rusty Bull Brewing Co. developed a fall beer with the help of social media and a touch of childhood nostalgia. Co-owner Ben Mayer explains that they had the idea of doing a cereal beer but wanted to include their customers in the process. Cereal fanatics nominated their favorites, and Peanut Butter Captain Crunch emerged victorious. “The cereal goes in during the mash when the traditional grains are added, and we’ve found that it increases the complexity while giving more to the malt backbone of the beer,” says Mayer. Cereal, peanut butter, and beer sounds like a combination worth wrapping your head around. The beer took a break, but makes its return on tap late Oct., early Nov. the brewers say.

Edmund’s Oast Brewing Co. is also brewing a brown ale this fall, but theirs, known as the Comfy Armchair, is on the lighter, more refreshing side. According to EOBC’S Brandon Plyler, “this soft, malty beer is easy drinking and is a beer that you can comfortably settle into, like a plush leather arm chair.” Plyler explains that the toasty, nutty brown ale is reminiscent of a session-style variety you might find in a cozy pub.

Take a trip to Low Tide Brewing on Johns Island where they collaborated with “six pack Joe” congressman Joe Cunningham to create a beer celebrating his bipartisan bill to permanently ban offshore oil and gas drilling off the Atlantic and Pacific coasts, which passed the House Committee in June. This light citrusy American IPA premiered on September 21 at a release party at the brewery.

It wouldn’t be fall without pumpkin beer, and Baker & Brewer has you covered with a 6 percent ABV sour pumpkin ale called Pumpkin Patch Kid. According to production manager Chris Brown, the kettle sour is “packed full of pumpkin spice to offset the tartness.” Brown explains that the pumpkin is added in the mash and again in the boil with the pumpkin spice, allowing the flavor to permeate the beer. While not currently on tap, Brown says it should make an appearance the second week of October.

Elvis has entered the building over at Ghost Monkey Brewery. This fall, Ghost Monkey partnered with Frothy Beard to create the Falcon King, which is made to taste like Elvis’ favorite food through the use of peanut butter and Belgian yeast. “Typically we brew with an American yeast but using a Belgian one adds notes of banana and esters, creating the peanut butter and banana sandwich-effect that Elvis loved,” says Frothy Beard co-owner Michael Biondi. Biondi explains that they use their Maltese Falcon Brown Ale as the base, and the peanut butter is added into the boil. While Frothy quickly ran through the brew, Ghost Monkey says they still have plenty to go around.