Tips for getting published on McSweeney’s Internet Tendency

Hint: Don't Try to Be a Hipster Writer 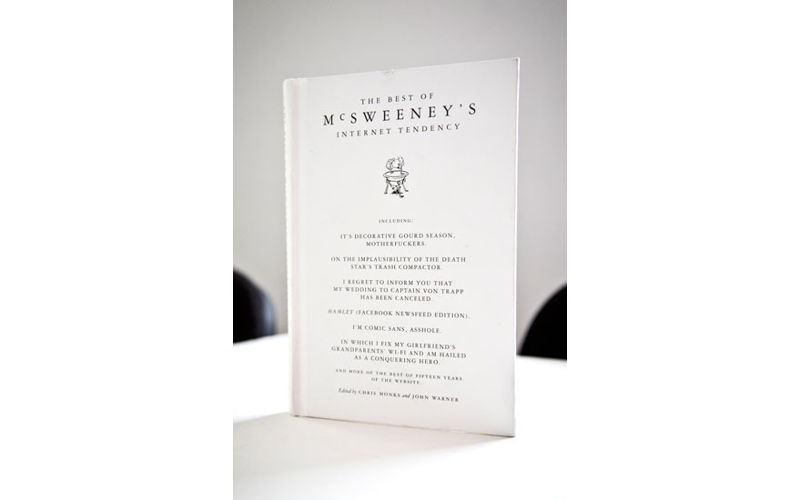 The kindest and most personal rejection letter I ever received was from an editor of McSweeney’s Internet Tendency, the online humor repository founded by literary star Dave Eggers.

As a longtime fan of the site, I thought I had struck upon an idea that would fit its cultural milieu: A listener writes a letter to Bob Boilen of NPR Music to tell him about a hot new band called LIONS MAYNE, a medieval-themed hair metal group started by a bunch of stay-at-home twentysomethings from Hi-Nella, N.J., who have been making a splash “at concerts as far away as Baltimore with their unique sound and fantastic but worrisome pyrotechnic displays.” The punch line is that the letter writer is the mother of the band’s bassist, and she really wants him out of the house.

“I’m embarrassed to say my ignorance of Boilen works against this one,” came the email reply from Internet Tendency editor Chris Monks. “Thanks for the chance, though. You were right to send it here.”

I wasn’t even upset. I’ve received plenty of rejections in my day, but nearly all had been form letters. As it turns out, the Internet Tendency has a policy of reading all submissions and responding personally. That’s no small task for a website that receives hundreds of unsolicited submissions per week from novice and professional writers. I learned this after speaking with John Warner, the site’s editor at large, who as it turns out is also a visiting instructor in the College of Charleston’s English department.

“The ethos from the moment I started was rooted in my own life of having my work rejected by others,” Warner said. “So I said at the very beginning, everybody’s going to know a human being read this and responded to it, so every rejection would be personal in some way, shape, or form.”

The occasion for our interview was the release of The Best of McSweeney’s Internet Tendency, a book that describes itself on the back cover as an “attempt to trick readers into paying for a curated, glued-together version of what is available online for free.” Since the Tendency has no online ads, selling compilation books is the only way it generates money.

As we sat in Warner’s modest Glebe Street office, I was struck by his plainspokenness and plain dress. This surprised me because, as literary brands go, McSweeney’s rests in the upper echelons of hipness. I ask him what it takes to get published on the site, and he replies, “It’s a little like Potter Stewart’s definition of pornography: I know it when I see it.”

That wasn’t what I expected to hear. The site does have a few well-defined niches, including literary parody (“Highlights from The Real Housewives of Yoknapatawpha County” by Nathan Pensky) and pop culture nitpicking (“On the Implausibility of the Death Star’s Trash Compactor” by J.M. Tyree).

Warner says he’s seen a few people online who were guessing at how to get published on the site, and it always makes him laugh. The editorial staff of the Tendency consists entirely of Warner and Monks, with Monks doing most of the heavy lifting in recent years.

“It sort of always cracks me up, like, ‘those McSweeney’s hipsters,’ when you couldn’t find two less hip people than me and Chris,” Warner says. “I turn 44 next week. Chris is already 44. He’s a stay-at-home dad in Massachusetts. He works in his pajamas at his dining room table. Neither of us has ever been cool. We’ve never lived in New York. I’ve never even seen the McSweeney’s headquarters in San Francisco.”

The Tendency is a granddaddy of internet humor sites, founded in 1998 before Cracked.com, Funny or Die, or even CollegeHumor went live. “Dave Eggers started it along with when he started McSweeney’s Quarterly, just because, like, it’s the late ’90s and you’re supposed to have a website,” Warner says.

The site’s design, which consists of plain black text hemmed in by wide white margins, has barely changed since 1998, although the focus has shifted to humor since Warner took the helm in 2003. Tendency’s not trying to compete with Buzzfeed or the Onion; nothing on the site ever really goes viral. So in that sense, yes, it is a hipster thing. You sort of have to be in the know.

I press Warner for a better set of guidelines than “I know it when I see it,” and he obliges.

“You can see certain strings. There’s obviously an interest in pop culture, literary culture,” Warner says. “I think it’s a mix of high-brow and low-brow, which makes us middle-brow. It’s one of the most common criticisms of the site, which I’m comfortable with.”

Warner has contributed a few pieces over the years as well, including “Fondling Your Muse: Fighting Procrastination,” a column of outrageous writing advice that eventually landed him a book contract with Writer’s Digest. As an editor, he says he’s seen some authors submit upward of 30 and 40 pieces before getting something published — including the now-popular Teddy Wayne (author of “The Rejection of Anne Frank” and the Teddy Wayne’s Unpopular Proverbs series), who has since written two novels and been published in The New York Times and Vanity Fair.

Heartened, I resolve to submit at least 35 more pieces to the Tendency this year — sorry in advance, Chris and John. As a parting question, I ask if there are any submissions he’s tired of receiving.

“The most common is the List of Rejected McSweeney’s Lists. I mean, that comes in once or twice a month from different people,” Warner says. “The people who think they’ve unlocked the key usually are wrong, because the key to getting something accepted is to just mine your own obsessions. Like, what are you obsessed with? And odds are somebody else is obsessed with that as well.”

Such is the internet, I suppose. But even if the Tendency never publishes me, it’s a corner of the web that will always feel like home.

“We opened up the submissions inbox, and we decided we were going to be wholly egalitarian,” Warner says, “and it worked.”

CORRECTION: The article originally stated that John Warner is a professor at the College of Charleston. Warner is a visiting instructor. We regret the error.