Tips and wisdom from Charleston’s own celebrity chef Nathalie Dupree

Thanksgiving by the book, or not. 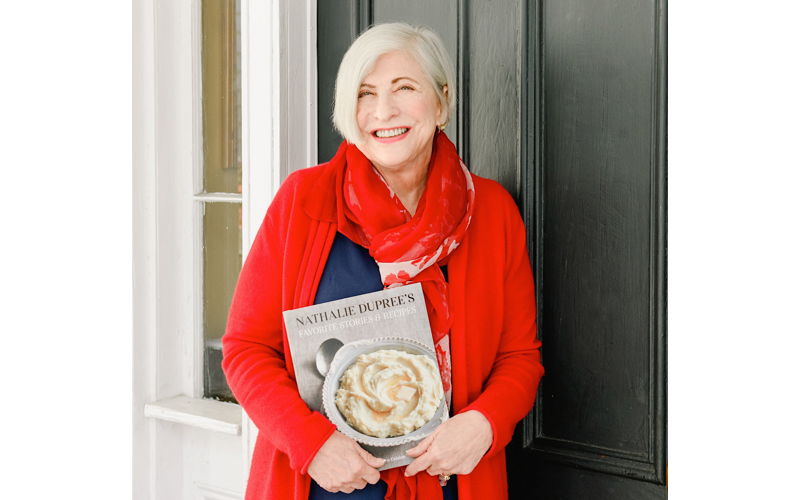 If there’s a sexier cookbook cover, I’m not sure what it is. Golden pools of melted butter luxuriate in a luscious bed of silky smooth mashed potatoes, their decadent peaks swirled by a stylist just so, their rhythmic artistry echoing the bowl’s scalloped edges. “Mashed” may be too crass a word for this culinary confection. This is comfort food that transports you beyond comfort, deep into pure seduction. This is the come-hither cover of Nathalie Dupree’s Favorite Stories and Recipes. Butter lovers beware.

Make it easy on yourself. There’s nothing wrong with shortcuts like buying pre-chopped onions at Trader Joe’s. “I make as much ahead of time as possible,” Dupree advises, especially for often-overwhelming holiday doings. She cooks her turkey the night before, as well as her mashed potatoes. Reheating in the microwave is perfectly acceptable.

And never forget, she’s quick to add, the whole reason for cooking for others is not to make an impression, but to make connections, to bring loved ones to the table. Those butter-lathered spuds, among other tasty fare from Dupree’s recipe troves, are a means to an end, not an end in themselves. In Dupree’s gastronomy, a fine meal is as much about enjoying people as it is marveling at mashed potatoes, though marvel you will.

It might be a tad of a stretch, but not much of one, to suggest that what Dolly Parton is to country music, Nathalie Dupree is to the kitchen: a been-there, done-it-all blond bombshell whose credibility and talent is unassailable. Bear with me, you fanatic Dollyphiles.

Like Dolly, Nathalie is a straight-shooting, smart-as-a-whip (or whipped cream) Southern icon with sassy wit and big heart. Both women came from families that knew economic hardship; both used charm and grit to elbow through sexism in male dominated industries. Both hit their early strides with successful TV shows — Dupree has filmed some 300 episodes for the Food Network Channel and PBS, and both have produced hit after smash hit through the years — Dupree a best-selling author of 14 cookbooks, with the most recent, the tome with that salacious cover, released this fall, just in time for Thanksgiving. Before that, her monstrous Mastering the Art of Southern Cooking was re-released as a special commemorative issue, weighing in at over 8 pounds, a big healthy baby. “I guess people think I’m about to knock off soon,” the 80-year-old Dupree says. Not so fast, though; she’s got other plans, including other cookbooks.

While Dolly has been honored with lifetime achievement awards from both the Country Music Association and the Grammys, Dupree, a multiple-James-Beard-Award winner, was crowned a “Grand Dame” by Les Dames d’Escoffier International in 2011, and inducted into the James Beard Foundation’s Who’s Who of Food and Beverage in America, basically the highest rung of the foodie ladder. For Dolly, writing songs is all about storytelling. For Nathalie, “a good recipe tells a story,” she says. I’m not sure if these Southern sisters have ever met, but I’d love to be a fly on the wall if and when they do.

“Nathalie has this refreshing honesty. She speaks her mind and definitely has a lot of wisdom to share — the wisdom of someone who’s had a million jobs and several marriages and traveled all over the world,” says Jenni Ridall, a local food stylist and recipe creator who worked alongside Dupree for months as she painstakingly tested every recipe in Favorite Stories and Recipes. “Nathalie is a purist, everything she puts her name on in print has to be exactly right and has to work for the home cook.”

Before moving to Charleston, Ridall had worked and studied with chef Virginia Willis in North Carolina, one of Dupree’s “little chickens,” as Dupree dubs her many protégés, and when Willis found out Ridall was moving to Charleston, she introduced the two. “Nathalie was so generous in welcoming me, and was particularly savvy with her woman-to-woman business advice. ‘We need to talk about some things,’ she said, warning me to charge appropriate rates and not undervalue my worth as many women tend to do. And she’s been amazingly supportive, offering me this opportunity to work on this book, my biggest project since going freelance and starting my own company,” says Ridall, owner of TK Culinary Consulting + Test Kitchen.

As Ridall experienced firsthand and as Dupree’s fans and followers have known for years, Dupree’s mission is to empower, educate, and inspire the home cook. She follows three basic principles in determining what she’ll include in a cookbook: “Every ingredient has to be available at the average grocery store.” (Dupree shops primarily at the downtown Harris Teeter, or rather, her husband Jack Bass shops there – “I send him with a list, he doesn’t trust me.”) “It has to be relatively affordable,” she insists. And, “It has to be doable by the average home cook. Which is what traditional Southern cooking was — home-cooked food.”

“Nathalie is a teacher at heart, she wants people to be comfortable maneuvering in the kitchen,” Ridall says. Yet despite her own Cordon Bleu training and decade of expertise, there were times Ridall was less than comfortable tackling some of Dupree’s recipes. “I was like ‘What! We have to make the Mont Blanc from Angelina’s in Paris? And a croquembouche?’ I’m not sure anybody in their right mind would make one of those at home, but Nathalie was like, ‘Why are you afraid of it? It’s just cooking. Just follow the steps and it’ll be fine.’ And it was,” Ridall says.

Even if a fancy croquembouche is not on your menu, sometimes the steps one needs to follow are unclear or overwhelming. For example, on Thanksgiving, when even the most confident home cook is often faced with more guests than usual, and certainly more expectations from whomever might have traveled over the river and through the woods to your humble table.

Thanksgiving “is fraught with hidden agendas and mixed feelings,” Dupree states outright in the new cookbook’s essay titled “Giving Thanks.” “Learning how to negotiate and be flexible in feeding others on this day brings food into its seat of power,” she continues. And thus you get the picture: This woman knows a lot about food, but even more about human character.

“The main thing I want women and cooks to remember is that food is a control issue. Whoever controls the food controls the show, and that can be extraordinarily frustrating for people,” says Dupree, recalling having had young children at her table who wouldn’t eat anything but mac-n-cheese. “So why not keep Annie’s mac-n-cheese in the cupboard, or better yet, go ahead and make it. Figure out what’s going to make everybody happy,” she suggests. And — this one was music to my husband’s ears — Dupree is a big fan of serving the meal at a regular hour. “A wise cook focuses the fete as close to a normal eating time as possible … tummies and tempers will be better for it.” So much for my lobbying for a 4 p.m. serving time.

And besides Annie’s mac-n-cheese (if your picky eaters require that), what else will be on Nathalie Dupree’s Thanksgiving menu? Turkey, of course (she cooks two — one the night before, that she carves and heats up to serve, and one smaller one for show and for leftovers), plus roasted vegetables, probably creamed corn, and an orange ambrosia that’s a family Thanksgiving tradition. Her apple pie is a contender for the dessert options, and then of course there are the mashed potatoes.

“Every cook should have one dish that when people are lying in bed at night long after she’s dead and gone they’ll remember that dish and long for it, like mashed potatoes. I load ’em up with cream and butter,” Dupree says. “Don’t serve diet food on Thanksgiving. It’s time to sit around the table and be fat and happy.”

Her parting tip? “I’ll let you in on my secret,” she says. “Fill a big cooler with hot soapy water, then put it out of the way. Put all your dirty pots and pans in the cooler, and hide the dish soap. Maintain control of cleanup; that way people can enjoy relaxing around the table. Who cares about pots and pans on Thanksgiving?”