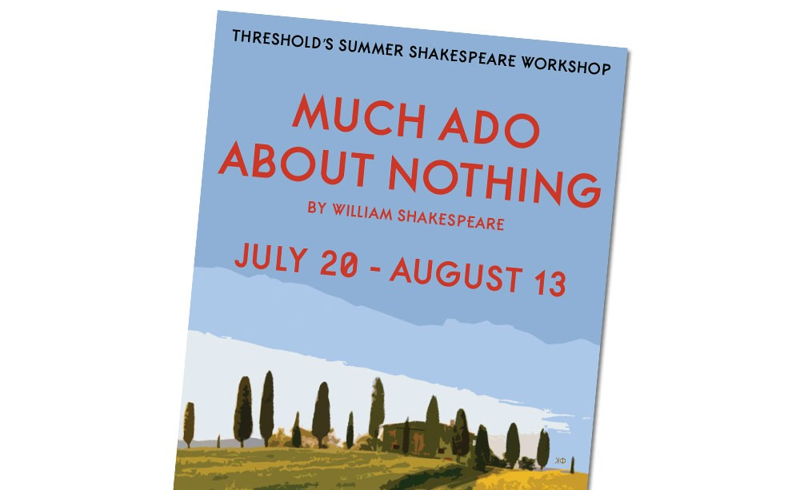 If the words “Two households, both alike in dignity,” conjure up cringe-inducing high school flashbacks; if thees, thys, and thous make your eyes roll into the back of your skull; if the idea of reciting a Hamlet soliloquy in front of your angsty teen peers makes you want to crawl into a broom closet; if you carry with you what actor and director Amelia Sciandra refers to as “Shakespeare baggage,” well, you are not alone.

“People say ‘I hate Shakespeare, I won’t like this play — I’ll never understand what they’re saying,'” says Sciandra. “The thing about the text is right away our ear doesn’t cling to it. You need to give the audience 15 minutes. If in the first 15 minutes you can be engaging enough, that despite their ear hitting the text and going ‘I’m not sure what’s happening here’ they will suspend disbelief and keep going.”

Sciandra, a self-proclaimed “Shakespeare nerd” with an MFA in acting in the British Tradition, is a veritable conduit to The Bard himself. And, in Threshold Repertory Theatre’s production of Much Ado About Nothing, she aims to make a lasting connection between the audience and the actors onstage, preserving centuries-old language one scene at a time.

The comedy, which one of Sciandra’s actors describes as a “proto rom-com” is thought to have been written near the middle of Shakespeare’s career. It’s certainly a love story, with love manifesting as both immediate infatuation and nuanced longing — Hero and Claudio fall for each other upon first meeting; Benedick and Beatrice, longtime verbal sparring partners, pretend to hate each other but secretly care for each other. “We all know people like that,” says Sciandra, referring to both romantic situations. “And then you have some of the things in this play, almost cliché in our modern society, and maybe we don’t even realize it. Dogberry is the bumbling cop figure. You see the frenemies, the two serving women, not the highest status characters, forced to serve. There’s the ‘I’m so happy you’re the bride and I’m the bridesmaid but I want to kill you’ kind of thing. That’s why it’s so fun to work on these things contemporarily.”

Sciandra explores the origin of the trope in true Shakespearean fashion, employing a large cast despite the size of the Threshold stage. “The reason I wanted to have a big cast is we know the Globe had big casting. If you do the play as written and have one actor play every part, the cast is even larger.” Sciandra says that the other reason for the big cast was so she could include actors with varying levels of both acting and Shakespeare experience: “I took people who have a ton of Shakespeare experience, people who have acting experience without Shakespeare, and some people who have never been in a play before.” Having inexperienced actors take the stage to try their hand at a tongue-twisting language is, for Sciandra, a risk worth the reward. “People willing to have their first play be a Shakespeare play is a kind of willingness I find really exciting,” she says.

Sciandra, who also happens to be fluent in Spanish, is no stranger to ‘ah-ha’ teaching moments — the director spent a semester teaching fifth and sixth graders to hablo español. She compares the experience to teaching English speakers how to approach Shakespeare’s English. “My students could read Spanish, but then they’d read sentences out loud and they wouldn’t have any idea what they were saying. So I broke the sentence down and made them say it again and there was the magic ‘Oh I’m speaking Spanish!’ That’s what I’m trying to do here. We recently broke down a Benedick monologue and my actor said ‘Oh I see.'” And, Sciandra urges, something as simple as speaking the words of the play aloud completely changes the story in our minds. “These plays were meant to performed. Originally the actors didn’t even get the whole play. They just got the parts they were performing and cue lines. As a modern actor you have to sit down and read the text and break apart the text but then you must get it up on its feet. It’s meant to spoken, meant to be heard.”

Sciandra believes that if her actors understand what they’re saying, then the audience will catch on. “Shakespeare’s audience was made up of two kinds of people: smart educated lawyers and the like, and common people who couldn’t read and write.” If the latter group could appreciate the thees and thous, says Sciandra, certainly today’s audience should be able to make the connection. And, what’s more, Sciandra has infused the play with Charleston themes that should get even the most wary audience member through the first 15 minutes. The play is orignially set in Messina, which, serendipitously, is three syllables, just like dear old Charleston, so Sciandra can change the setting without having to “ruin the verse.” Sciandra also changes up the time period, setting her version of Much Ado in 1813, one year after the War of 1812. “It doesn’t really change anything, in the sense that it’s a post-war play,” says Sciandra. “You only know that because you hear that soldiers are coming home in the first scene. The reason I think it’s important to have a war to anchor the play around is it being post-war explains a lot of the male behavior, they’re coming back from battle, they’re horny, and they want to find wives. Also, Charleston didn’t play a huge role in the War of 1812 so it’s a distant war, so the women and old people were waiting for soldiers to come home, and when they did it was celebratory. And that’s part of the play, too, it’s a celebration of love.”

If a Shakespearean comedy, chock-full of bawdy humor, balanced out with really serious, heavy moments, set in 19th-century Charleston still makes you want to dart into a broom closet, think of it like this: “If you like 27 Dresses, you’ll like this play,” says Sciandra. “The Lion King — that movie you love — is Hamlet, period, full stop.

Much Ado has something for everyone. Song, dance, masks, a very typical villain. If I can have a single person come in and walk out thinking ‘Oh, I think I like Shakespeare,’ then I’ve won,” says Sciandra. “We’ve won as a company.”