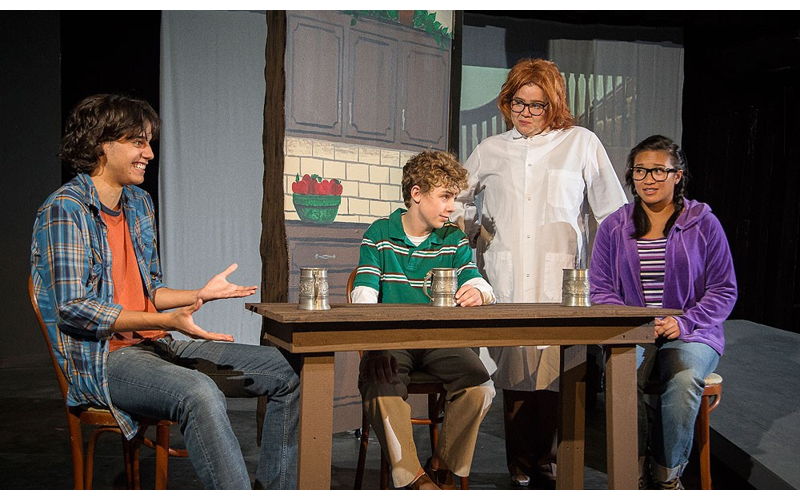 “It was a dark and stormy night…”

That’s how A Wrinkle in Time, Threshold Repertory Theatre’s season six opener, starts. And like “Once upon a time,” it invites the listener to snuggle in for the ride.

But bringing Madeleine L’Engle’s sci-fi classic to life, with its sweeping themes of good versus evil, family relationships, and time travel, to the tiny Threshold Rep stage is an epic tale of its own.

“It was written for a stage with wings and a ceiling high enough to fly somebody in,” says Mike Kordek. “We’re going to be doing all of that in a way most people probably wouldn’t do it.”

For Threshold, that means using projected images on a scrim to advance the story. When the characters travel to another planet, they do so in front of a swirling vortex on the screen. When they fly, puffy clouds dot a blue sky and atmosphere is provided by a projection of scary woods. When the kids visit a planet where conformity reigns, projected photos are all monochromatic black and white. And, in case you’re wondering, yep, the words “It was a dark and stormy night” show up on the screen as well.

“The play was created in 2010 by John Glore, and this is actually the first time it has been produced in Charleston,” Threshold Executive Director Courtney Daniel says. “It was based off of the book but was just adapted very recently, so we could consider it a new work. It’s a big title and a lot of people know the book. There was a movie in 2003, but it wasn’t very good. The play is mostly based on the book.”

The book involves young Meg and her brother, Charles Wallace, who are joined by friend Calvin in a quest to find the siblings’ scientist father, who disappeared during an experiment with time travel. The children must travel through space and time during their search, while evading an evil force, “It.”

Even before the projections, the actress Kimi Hugli who plays the lead, the smart outcast Meg, had pictured the planets in her head.

“I read the book when I was younger,” Hugli says. “And then I read it again when I got cast. I remember how much I loved it, what an incredible journey it is. The descriptions in the book are not all that detailed though, so before I saw the projections, I had to build my own world in my head.”

Part of that world includes the story’s bad guy referred to in the play as the “darkness” or “black thing” — a supernatural evil that’s trapped Meg and Charles Wallace’s father in another dimension.

“The menace is being depicted in the way actors are portraying the characters as they first see the darkness,” Kordek says.

“You see the ‘bad guy’ through the fact that he takes over people through Charles Wallace, when he becomes possessed by it,” says Daniel. “You should see the way Taran Gabriel plays Charles Wallace.”

At 14, Gabriel is the cast’s youngest member. “You can see the difference between Chris Wallace before and after he’s possessed, in his speech, in his actions, even when he’s on stage by himself,” says Daniel.

Kordek says that the hardest part for Hugli as Meg is to play a role that is so much younger than the actress herself. In the book, Meg is 12 while Hugli is in her twenties.

The cast is hoping the audience will find their own inner child as well.

“It’s going to be a visualization for them,” Kordek says of the audience. “This is a very heavy fantasy-based story with creatures. The audience will need to become childlike as a way to envision those things.”

And, the cast hopes the audience will succumb to the magic of the story as well.

“The play is actually written with the idea of it being a book. We’re hearing this story, so we have narrators come out and tell you where you are, that Meg is in her bedroom and she’s scared of thunder,” Daniel says.

“It reminds me of a chorus in Shakespeare, where they come out and tell you what’s happening,” Kordek agrees.

“All in all, it’s a hero’s journey, it’s a coming of age journey for Meg,” says Daniel.

Hugli adds, “For a younger audience, I hope they will realize that it’s okay to be someone different, to be expressive, to be a more loving, caring person to someone who is different from you, because we all need one another.”