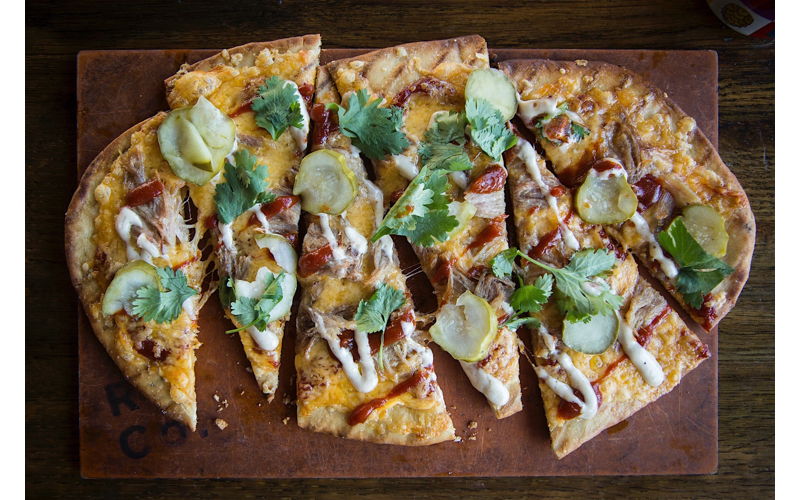 Elevating the local neighborhood joint is both difficult and a paradox. On the one hand, appealing to the community by offering an uncomplicated menu sounds easy enough — serve burgers, beer, and wings and you’ve got a runaway concept that the locals are sure to flock to, right? Charleston, however, is a tricky market. Restaurants in other cities can get away with serving a decent burger or sandwich but in downtown Charleston the modus operandi is “serve gorgeous, Instagram-worthy food that’s worth the price” or your doors will be closed in a matter of months. The truth is harsh but between the discerning locals and the expectant tourists a restaurant has got to prove its worth by proving its value.

Rutledge Cab Co. has weathered that storm. In the years since its opening in 2013, it’s made menu and chef changes and battled growing neighborhood competition from the likes of Park Café, Butcher & Bee, Tattooed Moose, and a plethora of nationally renowned barbecue joints all within blocks of its doors. Luckily for RCCo., for the most part the vast menu might be the best it’s ever been.

Take, for example, the mac and cheese ($13). Easily my favorite appetizer, the mac is served in a delicious creamy mornay featuring Tillamook and gruyere nestled in amongst the shells. The portion is so large it could function as an entrée and I ate so much of it that I almost couldn’t eat the entrées I ordered.

The burgers are especially good, my favorite of the bunch being the French onion burger ($13). Caramelized onion, gruyere, and béchamel topped this beefy stack, the flavors hitting every note of true French onion soup. I would not have thought that the flavors would marry so well on a burger but it just worked in a refined yet messy way. I also decided to build my own burger with mushrooms, onions, and a fried egg ($12). While the flavors were still great, it didn’t possess the uniqueness of the previous burger. I was very impressed that both burgers were cooked to a perfect medium rare throughout the patty from edge to edge, no grey ring around the outside.

To break up the burgers, sandwiches, and wings, I opted for a selection from the breakfast menu. The Rutledge omelette ($12) features fresh pastrami, breakfast potatoes, and Tillamook cheddar. While the pastrami was good, the crispy breakfast potatoes in the omelette were the unexpected surprise. It’s still a welcome novelty to have the ability to order breakfast dishes all day. I wish more restaurants took a page out of RCCo’s book by offering eggs and French toast past 11 a.m.

While billed and priced as an appetizer selection, the substantial succotash salad ($10) featured fresh local butterbeans, black eyed peas, corn, and green beans in a light vinaigrette. A welcome departure from the meat-heavy dishes on the table, the succotash is something I could easily see even meat lovers ordering once a week for dinner as a vegetarian detox.

Other appetizers need some work. The pork flat bread ($10) is one such item. Pulled pork, Tillamook cheddar, house-made pickles, and onion aioli reads as an appealing appetizer. Unfortunately, the onion aioli was watery and messy, completely concealing the flavor of the cheese and pickles. While it could have taken center stage on the dish, the pork was too smoky and resulted in an abundance of bold flavors that didn’t complement one another.

While the happy hour pricing of both the wings ($5 at happy hour, $10 on regular menu) and the poke ($5 at happy hour, $13 on regular menu) was an added bonus, neither materialized to much. The wing meat was tender, but on the outside the wings were black in places and burnt. The poke seemed to be an outlier on an otherwise sandwich- and burger-heavy menu, an odd but potentially promising dish. Unfortunately, the normally fresh and bright Hawaiian delicacy was too fishy, a shame considering ahi tuna is by no means a cheap ingredient.

The two selections I ordered from the sandwich section were just OK. The fish tacos ($11) consisted of mahi, cabbage, and avocado cream and left something to be desired. The fish tasted too dry and, again, fishy. Again my hopes were dashed with the chicken sandwich ($14). The beautiful presentation of a towering, crispy chicken sandwich was its biggest selling point. In this case, the visual betrayed the bland flavor of chicken that sat too long in the fryer.

However, the last two dishes sent out were such unabashed comfort food staples that I couldn’t help but smile when I tasted both of them. A chicken kabob ($15) at first glance may not seem to imply comfort food but when paired with a rosemary-scented wild rice blend, grilled veggies, and a lemon-butter dipping sauce the delicate flavors are a fine example of a backyard summer cookout at its best. The chicken pieces were plump and juicy, a perfect match for the aromatic wild rice. Mushrooms and peppers had just enough char on them from the grill to give them a tender yet mild palate.

Last but certainly not least, the chicken and dumplings ($16) arrived. I had zero expectations for this dish as most restaurants in Charleston opt for flashier local favorites like shrimp and grits, Frogmore stew, and Lowcountry boil. Chicken and dumplings is sacred in Southern culture; most locals might not even consider ordering it on a menu for fear that it would do a disservice to grandma’s classic recipe. While this iteration does take some creative liberties, the result is worth the extra effort. Biscuit dough is substituted for slightly dense gnocchi, green beans are added for a pretty pop of color, and the broth is thickened into a sage-scented light gravy. It’s a delicate balance between comfort food and a creative new take on a classic; this grey area is where Rutledge Cab Co. is its most successful.

While Rutledge Cab Co. is not going to turn heads with flashy, expensive menu items or even a big-name chef at the helm, it’s able to execute some tasty, inexpensive entrées in a comfortable environment. RCCo.’s mission statement seems to be “we want to be your weeknight dinner destination” and I think they’re well on their way to cementing their place in the neighborhood for good with their newest menu. Once they tighten up the recipes of their appetizers to match the quality of their better-than-expected entrées, residents will likely continue to visit the Upper Peninsula spot for years to come.