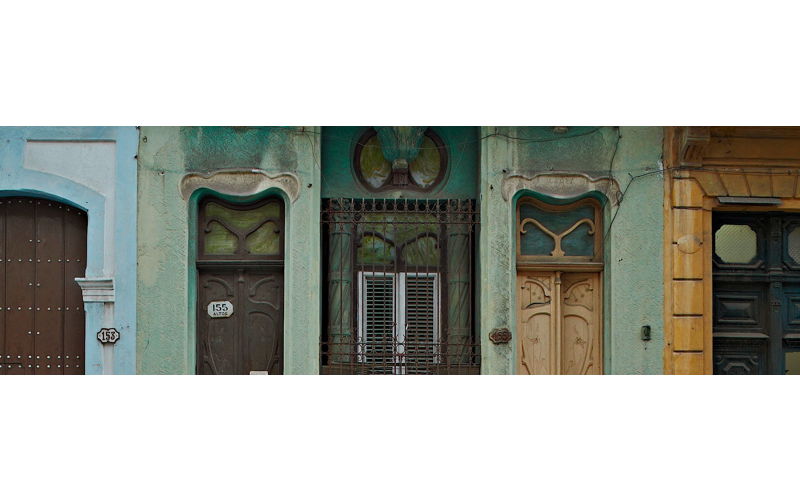 What image comes to mind when we think of the South? Is the landscape defined by something recognizable, like the houses on Rainbow Row or the branches of the Angel Oak? Does the South begin near the “bottom of the planet,” in Micheline Callicott’s photographs of New Zealand? Or is it found in Richard Sexton’s languid architectural images of Louisiana and Cuba? Maybe the South ends in the tiny hole of Kevin Bruce Parent’s pinhole camera, with an image of our own Lowcountry landscape. Follow these three photographers as they journey around the world to offer their unique views of the South.

It’s been years since Kevin Bruce Parent stepped into the waves with a surfboard, but you wouldn’t know it by talking to him. It’s not the lingo or the attitude of this artist that seems surfer-like, but his zen-like way of thinking about art.

“I don’t want my art to look like anyone else’s,” he says about his pinhole camera images. This attitude is reflected in his ethereal, painterly images of surfers lined up on the shore. “I’m attracted to the metaphysical feeling, the fleeting feel of these works.” Parent captures surfers in quiet moments between the expanse of the sky and sea in his black and white images. Landscapes of lone bald cypress trees with knobby knees standing on a flat stretch of water are hauntingly dramatic.

Parent’s introduction to the pinhole camera was a “complete accident.” In 1997, his wife bought him one for Christmas, and it sat on a shelf untouched for a year. Then one day while photographing birds, he realized he couldn’t do anything that hadn’t already been done. Humbled yet inspired, Parent went home and took the pinhole off the shelf. After years of working in color photography, the simplicity of the pinhole was liberating, and his transformation was immediate.

A pinhole lenseless camera is a light-tight box with a fine, round hole in one end and film or photographic paper in the other. Light passes through the hole, and an image is formed in the camera.

Without a viewfinder, Parent found that he could concentrate on the composition. “There’s no way to control what I’m looking at, no lens to focus. With the pinhole camera, I never know what I’m going to get.” The “time-consuming” lith printing process is frustrating, but produces beautiful results. “I don’t see the need to do any Photoshop stuff,” he says.

Less than a year ago, Parent was diagnosed with heart disease. At 52 years old, he realized he needed to slow down and think about what was important in his life. The answer was simple: “I do this because I love to do this.” Working with the pinhole camera is “a primitive process,” he adds. “I don’t have to worry about distractions.”

Parent enjoys the purity of this age-old technique. In fact, he prefers working in a less traditional direction, explaining that his work speaks to the Dada and Surrealist art movements.

Sans Lens is Parent’s first solo show at the Corrigan Gallery and will include new black and white images of surfers and Lowcountry landscapes. Lese Corrigan says, “Kevin’s work is wonderful. His craft is honed to perfection, he allows creative opportunities to follow their course, and he is patient and methodical. Kevin has the drive to continue pushing his work, to move beyond the pedestrian and pull it into a new sphere.”

Down Under
Micheline Callicott says she “gets pleasure through my eyes.” In 2007 she traveled to New Zealand and spent a month exploring the island’s landscape and people, attempting to “visually catalogue how what I saw and experienced was shaped by where I was.” Returning home, she was struck “at a gut level” by the memories she’d captured along the way in her photographs.

The trip to New Zealand inspired Callicott to think about geography and assumptions about southern regions. A native of Arkansas, Callicott has lived in southern Arizona, southern Ohio, southern England, southern Germany, and now South Carolina. In her work, she has continued to explore how the southern landscape appears in her images, from the “humid light seen in the verdant landscapes to the subtle expressions of my human subjects.”

A teacher of art and photography at the Academic Magnet High School in North Charleston, Callicott’s view of the South is unlimited. From portraits to landscapes to animals and weddings, her subjects are as diverse as the landscape surrounding them. In Mt. Pleasant, a young girl peers out of a black and white image, the background blurred and unimportant. The shadows and light on her face were created with a press camera, the kind used by photojournalists in the ’50s to create a “magical clarity.” Another image taken with a digital camera reveals three orange cones inside a former Charleston County incinerator, reflecting the beauty within an unattractive space.

The Saul Alexander Gallery at Charleston County Public Library will exhibit South: A Personal View of Region through May 30.

Beautiful Decay
Richard Sexton’s subjects are chosen for their “evocation of the passage of time.” Born and raised in Georgia, Sexton’s color photographs focus on declining Southern architecture.

Sexton began photographing while he was an undergraduate student at Emory University. In the late 1970s, Sexton became disillusioned with his art school experience and began a commercial photographic career in San Francisco, choosing to specialize in the photography of architecture. In 1991 he moved from San Francisco to New Orleans and began photographing the historic architecture of the region. He then expanded his vision to include southern geographic areas with ties to Louisiana, from Cuba to South Carolina and Georgia.

The author of 10 photographically illustrated books, Sexton’s website describes his approach as “descended from the tradition of the photo essay as embodied by the major picture magazines of the mid-20th century.”

Using vivid colors, his images depict interiors of buildings with peeling paint and a bulb-less chandelier; outside, laundry is hung from the railing while antennas point in opposite directions. Evocative and haunting, Sexton’s depictions of southern architecture illuminate the passage of time and the possibility of renewal.

Gallery owner Rebekah Jacobs says, “As a gallerist, I am often befuddled at the number of photographers who attempt to capture this region, but whose images translate as casual, sentimental, and sappy. What separates photographers like Richard Sexton from the masses — and certainly the amateurs — is his inherent sense of place, his patience and discernment of light, and his restless search for unique and infinite wonders. However, a Sexton photograph’s texture, composition, and aesthetic are most fully realized in real life.”

Languid Moments, a solo exhibition, will be shown at the Rebekah Jacob Gallery through June 13. Sexton will sign his book Vestiges of Grandeur: The Plantations Of Louisiana’s River Road at the gallery from 5:30-6:30 p.m. on May 7. On May 6, Sexton will lecture about architecture preservation at the American College of the Building Arts at the Old Jail on 21 Magazine St.