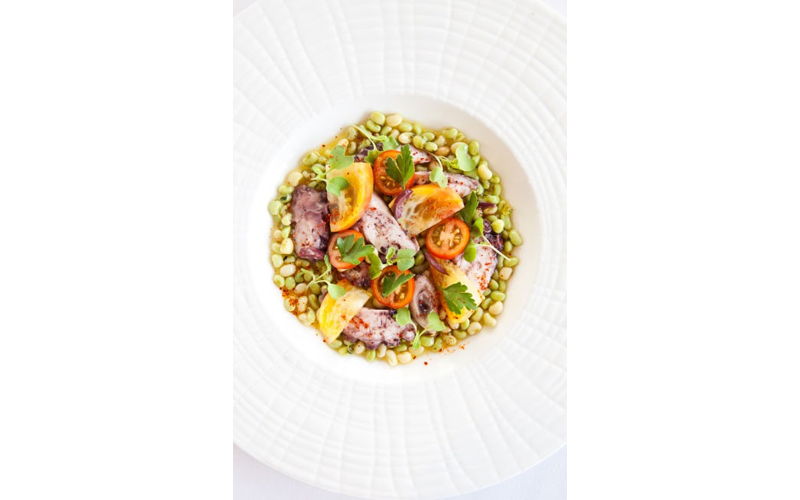 It usually starts as a conversation around a table — about things like objectives and customers and profit and purveyors. If you’re the three men behind Edmund’s Oast, a beer garden scheduled to open on Morrison Drive sometime this fall, all that menu development talk is paired with a bit of beer too.

The partners are Charleston Beer Exchange owners Scott Shor and Rich Carley, plus chef Andy Henderson, whom locals might recognize as a former sous at FIG. He spent the last few years in San Francisco working at Local Mission Eatery but returned to team up with CBX and help open the new space.

“We don’t want to be your stereotypical beer restaurant or brewpub,” says Henderson, who’s never created a menu from scratch before. “We don’t want to serve chips and nachos and chicken fingers and all that. We’re really trying to do a great menu, trying to include everything without spreading ourselves too thin.”

The menu will be reprinted every day with slight changes depending on availability, with a charcuterie program anchoring the selection. Henderson says the accessibility is what will set it apart from other menus in town, the ease of knowing that there’s something there that can appeal to almost anyone. “We’re trying to be as inclusive as possible,” he says.

To mix things up a bit, he’s been in talks with farmer Bo Collins at Sol Haven Farm about a “wish list” of produce that you won’t find in any other local restaurants — ingredients like exotic carrots and edible succulents that grow wild out west. “I like the idea of showing people that some things are not only edible, they’re freaking delicious.”

He says he was spoiled in San Francisco where there’s nothing you can’t get within 100 miles. “Here, you don’t have as many options, but it forces you to be more creative,” he says. “I really enjoy being back. It’s nice because I already have a lot of farmer connections here, and I’m very excited to rekindle and continue to work with those people.”

While the menu for Edmund’s Oast’s is still under development, the Craftsmen’s offerings were unveiled this spring. Chef Todd Garrigan’s menu is still evolving, and he expects it to continue to do so over the next few months.

The Craftsmen puts as much focus on their massive beer selection as their food. “I feel like we have a comfort zone that you might not have if you were just a restaurant,” says Garrigan, who previously worked on the menus at Tommy Condon’s and Amen Street. “We have a little bit of time to make sure we get the food right because the beer can carry us until the word is out. I don’t want to be the guy that forces himself down people’s throats. I want to see sustained success, and I think by cooking good, high-quality food at a good price and a good portion, it will make people come back.”

Garrigan’s constantly refining the Craftsmen menu to complement the brews on tap. “We really do try to match our food with great beer and find ways that we can put elements of the beer into the dish and keep it simple,” Garrigan says. But diners shouldn’t expect to see suggested beer pairings on the menu. The staff is trained to handle that. “We like to give them an opportunity to showcase their ability to pair the stuff. It makes them more than just an order-taker.”

The menu is anchored by the bar page, which remains fairly consistent. “We sat down and looked at beer food that we thought was really great, whether it was food to eat with beer or things that typically are served in pub or bar environments in the U.S. or Britain,” Garrigan says. There you’ll find staples like hamburgers, chicken wings, crab cakes, fish ‘n’ chips, and flatbread pizza (a nod to the restaurant’s former life as a pizza place). “We need to have big flavors to stand up to a lot of the beers that we serve.”

The other side of the menu is where Garrigan can flex his culinary muscles. It changes every day based on the produce he can get from small growers and the kinds of meats available. The details vary, but there is a formula behind it — you’ll nearly always find one kind of sausage, one meat dish, one fish dish, one skillet dish, and something on a carving board like brisket or stuffed quail. They also generally have at least one Paleo-style dish on the menu — no sugar or starches, just meat, vegetables, and fruit. “We don’t really wave that flag or anything, but that’s how I eat, and I know there are people out there who appreciate it,” Garrigan says.

“The hope is that when we’re pretty established, we’ll have a reputation for always having something fresh and different,” he adds. “I think a lot of people get into the daily thing and it becomes cumbersome for them. We anchor ourselves with this bar menu so we have staples and things that are always there, and then the other items leave us free to explore.”

In contrast to Edmund’s Oast and the Craftsmen, High Cotton has been a staple of Charleston’s fine dining scene for well over a decade — but that doesn’t mean it’s resting on its laurels. Menu development is still a major focus, especially since chef Joe Palma took the helm just over a year ago.

“When I got here it was obviously an established restaurant,” says Palma, who worked at Slightly North of Broad and did stints at the Ritz Carlton in D.C. and Le Bernardin in New York City. “It had a good reputation, so people had expectations when coming to the restaurant, and for all the stuff I wanted to do, you just can’t come in and take a restaurant that’s been successful for 13 years and change everything. You’re doing yourself a disservice and making it a lot harder than it needs to be. At that point you need to start winning people over again just like you would at a new restaurant. Whereas obviously the intention is to continue to keep and nurture the clientele you have as well as bring in some new people and do some things with food that help and aid in the reputation.”

Palma’s biggest task was lightening up the traditionally heavy Southern menu. “Get away from butter everywhere, get away from pork everywhere, get away from bacon and smoked this and the other, and do a lot more with acids, and raw fish preparations, and fresh vegetables, and things of that nature. We’ve come a long way in the last year … There are different types of preparations where it’s a little more broad than it had been before. It’s still in the same thematic box, but we’ve stretched out that box a bit, where before it felt narrow.”

Now the menu stays fairly consistent, with very strategic tweaks every three to four months. New dishes go through a vetting process, first introduced as specials and then closely analyzed. Customer feedback and sales figures are taken into account, resulting in a menu that’s planned out with mathematical precision. When they find a formula that works, they stick to it for a while, which usually results in happy customers as well as staff.

When we spoke in June, Palma said that he felt like High Cotton had finally found its groove. His proof? “We’re selling an equal number of every single dish,” he says. “Looking at those sales reports and the feedback we’ve gotten, we’re providing everyone’s first choice, which is what you always want to do. No one is settling for something they don’t want. It’s nice to see that even distribution among items.”

Palma continues to work within the confines of High Cotton’s established menu, something he prefers to creating a menu from the ground up. “For my two cents, I’d rather have the vendors and have the clientele and keep them to move forward than try to build everything from scratch,” he says.

Of course, he’s still always on the lookout for inspiration and developing new dishes. Just a few days before we spoke, he had eaten a memorable beet dish at the Inn at Little Washington in Virginia. This had him batting around ideas for a beet sorbet with heirloom tomato salad, which you might find on High Cotton’s menu if you’re lucky. “It’s never forced,” he says of the development process. “If you’re not excited about it, why bring it to the table?”