This old house…is for sale 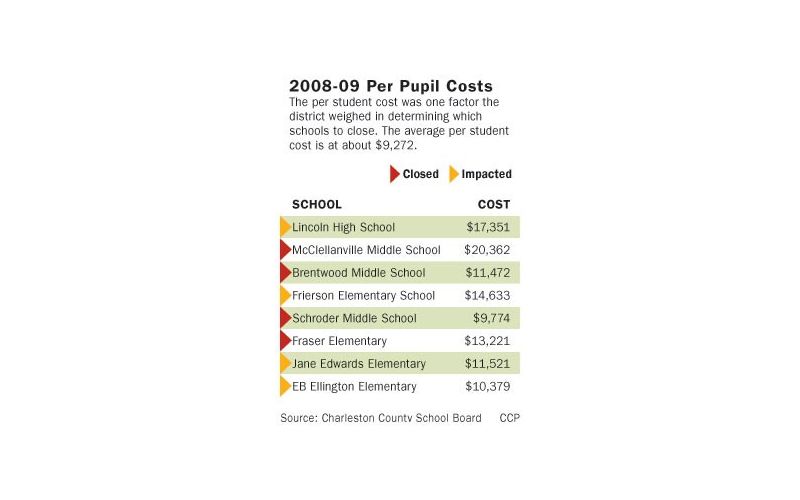 Looking for a nice little investment? Pining for the day that you can just wake up and walk across the street to the Starbucks, the bakery, or the library? Want a place within walking distance of Marion Square and downtown bars? Have we got the deal for you. Charleston County School District’s (CCSD) headquarters at 75 Calhoun St. is getting the once-over to determine if the district can reasonably get it off their hands. A vote is expected early next week on whether to close or consolidate as many as five Charleston schools, so the potential sale of the big office suggests CCSD is prepared to give anything up to address its growing budget deficit.

Officials first presented a plan with as many as a dozen schools threatened with potential closure. This week, district staff are expected to release a shorter list of recommendations for the board. If approved, McClellanville, Brentwood and Schroder middle schools, Fraser Elementary, and Charlestowne Academy will close. Many of the other schools that saw strong parent outcry have been spared. Downtown, Charleston Progressive Academy won’t close, Buist Academy won’t splinter, and the Charter School for Math and Science won’t move (for now).

District leaders say they’re looking at the facts on the ground. Less state funding means everyone is going to have to do more with less (or the same with less; hell, possibly less with less).

District to run leaner even without closings

Let’s say you’re in the market for a home; the best-case scenario is to find an anxious seller willing to take whatever they can to get out. Charleston hasn’t quite reached that level of desperation, but it’s certain to get there in the next six months. CCSD saw a slight increase in local tax collections and has staved off the brunt of state cuts with voluntary furloughs and trimming department budgets.

But the 2009-2010 budget year — which begins in July ­— is shaping up to be just the economic calamity the district was predicting when it first introduced the school consolidation idea last spring. Current estimates put the budget shortfall at more than $21 million of its current $323 million budget — the rough equivalent of 420 teachers. Typically, the difference would be made up with money from the rainy day fund, but there’s not enough there for this multi-million dollar typhoon.

Other savings will have to come. Either through mandated furloughs (cutting salaries), increasing class sizes (cutting teachers), or layoffs (cutting staff).

South Carolina’s legislature is largely to blame for the budget crisis. The state has been cutting Charleston’s funding for years to protect other, less affluent districts. Homeowner tax relief in 2007 helped by using a one-cent sales tax to fund school operations, but Charleston is still losing state money year after year. Legislators said earlier this month that the tight budget means changes to the formula will be unlikely in 2009.

And so, the district will also be looking for other savings, like making recent mid-year department cuts permanent, eliminating travel stipends, and reviewing bus routes, including reducing magnet school transportation. The planned school closings are expected to save the district $5.3 million in the first year. If those schools aren’t closed, employee and program cuts will have to go deeper.

These are the issues that Superintendent Nancy McGinley is facing in Charleston, but the headlines are actually from Seattle, where Charleston’s former Superintendent Maria Goodloe-Johnson has been struggling with school closings seemingly in tandem with the local debate. (The Seattle School Board will consider shutting five schools just three days after the Charleston board makes its decision.) Goodloe-Johnson and McGinley are coming at this with the same motivation — millions of dollars short in the budget means staffing fewer schools and cutting those that can’t fill their classrooms first.

“We have to make the best decisions we can for students,” Goodloe-Johnson told The Seattle Times. “And that’s exactly what we did.”

Like McGinley, Goodloe-Johnson first introduced a larger school consolidation plan, but whittled it down to a more palatable level after the Seattle community had its say. The news from Seattle may have a prophetic tinge to it — teachers and parents granted a reprieve in the second round of cuts stepped away from the soapbox as other schools continued to face closure.

District focused on those desks it isn’t using

In determining which schools might be closed, the district went through a largely objective rating system. Educational quality was a factor, but there are so many struggling schools, basing decisions on that alone would be like picking a favorite among your red-headed stepchildren. So it’s not surprising that the schools facing closure tend to pop up on two other lists focused on how much a school costs and how much room a school wastes.

Per student costs are an obvious concern when one wants to get the biggest bang for their community-shattering buck. For instance, the plan to close Fraser Elementary and send the kids to Sanders Clyde will mean that students have to walk an extra few blocks to school, but it will be putting kids that currently cost the district more than $13,000 apiece into a program that only costs $9,499 per child.

But the price paid for empty chairs is also a determining factor. When officials talk about consolidating schools, they’re talking about cutting the number of empty classrooms in the county’s schools. “Some schools are 60 percent empty,” says McGinley. “This is not the way to operate a school district.”

Every school, regardless of the size of its student body, has turn-key costs like maintenance and administration ­— costs that are easier to cut than teachers and classroom supplies.

The district will cut corners by consolidating schools in places like McClellanville where the middle and high schools were both operating at less than 40 percent of their capacity.

And then there are those popular suburban schools eyeing potentially abandoned school buildings like vultures. Maybe not vultures, but very hopeful mother hens looking for a new roost. Current and prospective parents spoke out in favor of relocating Charleston Montessori School, a West Ashley program that turns away dozens of students each year because it doesn’t have the room.

There’s nothing in this plan for the program, but district officials say they have heard the pleas.

“Their persistence has certainly raised awareness of their needs,” says spokesman Elliot Smalley.

It’s reasonable to question the district’s sincerity in offering up the Calhoun Street office (Mayor Joe Riley has already said he’ll stand in the way of any attempt to sell), but the symbolism in the midst of the broader debate over school closings is clear: there are no sacred cows — except for any modestly successful suburban school in a growing community. Just kidding, the district looked under those rocks, too. That said, the tough cuts are found in rural and urban schools — even though they’re in front of the chopping block for different reasons.

Rural schools cost more simply out of necessity. It primarily goes back to those turn-key costs in underpopulated regions. The grass that needs mowing doesn’t grow or shrink with the student population. The toilets that need cleaning don’t walk out of the bathroom when it’s clear they’re no longer needed (though, that would be cool).

In tough times, the district has to look at these half-full schools and wonder whether it can maintain independent rural programs without breaking the bank.

Recognizing the plight of rural schools, McGinley has proposed an initiative that will save some of these schools by relying on the communities that have begged and pleaded for their preservation. Rural campuses on Edisto and Wadmalaw islands and Ellington Elementary near Colleton County will be given a fixed budget to reduce the district’s burden, with the community expected to find ways to cut overhead costs.

Urban programs have a much more difficult sell to avoid the ax. Schools aren’t hours apart — they’re blocks apart. Though the district says it has never been planned until now, some community members saw Fraser Elementary’s potential closure coming for years — with the district consolidating leadership at the two schools and building a larger Sanders Clyde campus. Even a proposal by downtown parents to counter the district’s early plans conceded that Fraser could go.

District staff is also hoping to offer new opportunities in the downtown region, with magnet programs starting at Memminger and James Mitchell Elementary schools next year. There also may be some magnet offerings at nearby Charleston Progressive Academy program.

“It’s going to be better for these students at places with better options,” Smalley says.

When you’re trying to sell a house that needs a little work, it takes more than just calling it “quaint” or saying that it’s “in need of a little TLC.” You’ve really got to accentuate the positive. In its first round of potential closings, the district included more than just bad news — there was a host of new and expanding programs to lessen the blow. The final district plan is simplified, cutting most of the new initiatives, which will likely pop back up later.

Charleston Police Chief Gregg Mullen has been looking for space locally to develop a regional training center in order to get his new officers on the beat without having to wait for space in Columbia. One district proposal had suggested offering the Fraser campus for the training center.

The city has introduced a plan to upgrade aging downtown buildings at Buist, Memminger, James Simons, and Charleston Progressive to withstand a sizeable earthquake. There has been some debate about the necessity of such improvements, but Bill Lewis, the district’s building director, sees it as a top priority and will seek funding regardless of the larger restructuring plan’s success.

As one potential use for abandoned school buildings, CCSD officials suggested offering some of the campuses to rural towns as community centers, including McClellanville Middle School, which still faces potential closure.

The district had floated the idea of adding technical training programs at high schools like Burke and West Ashley, but its future is unclear considering the district’s decision to leave St. John’s High School open and to leave seventh and eighth graders at the Burke High campus.

Sitting down with sommeliers Femi Oyediran and Miles White, the emcee and DJ of approachable wine

I was seven, maybe eight, the first time I dabbled in wine. I was at Faith Temple Baptist Church and I remember anxiously scooting down the mile-long pew, racing down the aisle to the altar to get my thimble of wine to wash down those horrible sacramental wafers the pastor gave out.

Broken Home: The Save Veronica story

A guide to three of Charleston’s haunted places