Theater review: What If? keeps the laughs rolling with The Practice Child 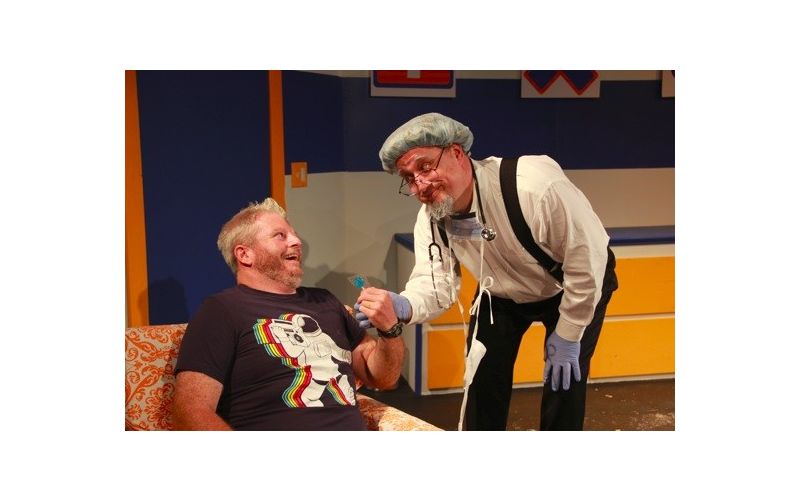 What If? Productions opened their second Playwrights Festival last night with a bang — or make that a buzz. To kick off opening night of The Practice Child, which takes place in a hospital room, What If? hosted a pre-show party complete with hospital wristbands for all audience members, complimentary cocktails, and a high-stakes game of Operation in which making the buzzer go off meant taking a Jell-O shot. It was a perfect preface to The Practice Child, a totally absurd and very funny comedy by SCAD graduate Tyler Stuart.

In Stuart’s play, which was the winner of last year’s What If? Playwrights Festival, Bill and his older brother Blil, as well as Bill’s fiancée Samantha and Bill and Blil’s mother Shirley, are dealing with Bill’s brain tumor, which has landed him in the hospital. Bill is a functional, down-to-earth adult, while Blil can scarcely take care of himself. That’s because their mother misspelled Blil’s name on his birth certificate and immediately wrote him off as a mistake, or “practice child.” Shirley herself is a hilarious holy terror given to high dramatics, lots of drinking, and bombastic behavior. The plot follows Bill’s treatment over a couple of days, during which time Blil falls in love with Samantha, Shirley tries to test Bill’s treatment on Blil, and various shenanigans ensue.

Stuart has an undeniable gift for comic writing, and he’s managed to create a play that is ridiculously funny, but not ridiculous. Part of this is because, unlike so many early-career writers, he’s capable of restraint — The Practice Child is divided into many short scenes, which keep any one joke or scenario from overstaying its welcome or devolving into self-indulgence (except perhaps in one case — Bill’s doctor, Dr. Cushing, has one line that he repeats over and over that got a bit tiresome).

The cast obviously understands the importance of this distinction, and they make the most of the humor without overplaying it. Bill (Randy Risher) and Samantha (Mary Fishburne) are the straight men of the group, and keep the story grounded in reality. The two actors even create some poignant moments between them, a pleasant surprise in a play so entirely comic. Dr. Cushing (George Younts) is Bill’s elderly, forgetful physician. Younts had a strong handle on the character, but he played him as overly loud and more of a caricature than he needed to be. That may be the fault of the playwright, who seems to have committed his only instance of overwriting with this character.

Brian Bogstad is very funny as Blil, a kind of sad man-child who writes poems that range from sweet to creepy as hell and is capable both of going under the knife for his brother, and of attempting (poorly, of course) to kill that same brother in order to get Samantha. He’s also utterly ruled by his mother, played by Sarah Coe. Coe’s Shirley is a massive personality, from her heavily applied makeup to her power pantsuit to the martinis that she pours into margarita glasses. Her bizarre cruelty toward her eldest son includes spraying him in the face with a spray bottle when he’s bad, beating him with a stick, and verbally berating him any time she gets the chance. And as terrible as she is, she’s also one of the funniest characters in the play.

So is Astronaut Ted Danson, played by Andre Hinds. The “astronaut” is the long-lost father that Blil finds sitting outside a sperm bank (it’s a long story). Astronaut Ted Danson is, of course, not their real father, and appears to be homeless, but he happily comes along with Blil to Bill’s hospital room to support his new family in their time of trial. Suffice it to say that Hinds pulls off this crazy character with aplomb from the moment he walks onstage in his stained sweatpants and duct-taped shoes, a huge beatific grin on his face.

And first-time director Darryl LaPlante also deserves recognition — he’s kept this a fast-moving play that makes the most of its many strengths, from the writing to the cast to the simple but effective technical design.

There were a few shaky moments when timing was off for lines or entrances, but they were only minor distractions. The Practice Child is definitely the work of a talented writer. Let’s hope the winning play of this year’s Playwrights Festival is anywhere near as enjoyable.