Theater review: breathe. a true story is straightforward and heartfelt 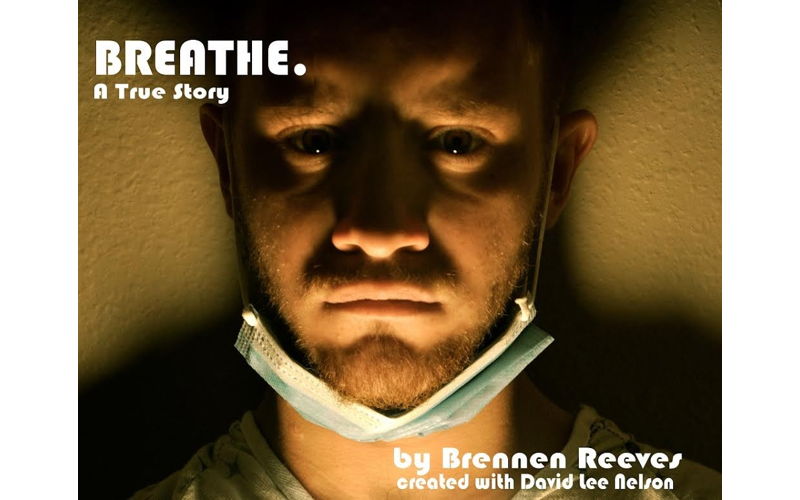 The word “normal” is often used as a standard of measurement, but its actual meaning differs so much among individuals that it’s been rendered almost meaningless. As a survivor of a double lung transplant and a lifelong struggle with cystic fibrosis, Brennen Reeves’ narration of his struggles with his own reality offers a different perspective of normality.

The power of Reeves’ one-man show recounting the story of his life lies in its unembellished sincerity. Armed with only a water bottle, some typed-up notes, and a giant notepad, Reeves sits at a table facing the audience for the majority of the 55-minute show. This simple setup is far from dull; instead, it allows room for the narrative to take shape, and creates a simple connection between the audience and the storyteller, unhindered by theatrics. The straightforward structure tells the story in an endearing and unpretentious way, making for an unfettered piece of performance art.

Illustrations are limited to the running commentary taking place on the giant notepad set up by Reeves’ side as he flips the pages throughout the story. With hand-written key words and crude stick-figure drawings, the notepad is a source of comic relief despite the profound and serious nature of his story.

This juxtaposition of humor and gravity is present throughout the show. When Reeves recalls the moment that he was first told he was going to die, he notes that he was eating a Quesadilla Explosion Salad from Chili’s. He proceeds to flip to a clumsy drawing of a Chili’s logo and assert that people in the hospital die not because of the disease that put them there, but because of the deplorable quality of hospital food.

These snarky observations and quirky insights make the storytelling funny even in its most sobering moments. The humor is tart at times, but it is delivered alongside heartfelt reflections that add to the fundamental candor of the story.

These quick switches between solemnity and levity do create some awkwardness at times. If the timing of a punchline is a little off, or the stare at the notesheets a little too long, or someone laughs at an inappropriate time, it brings some uncomfortable squirming. This awkwardness is part of the show’s earnestness, which is also manifested in little hiccups in the narrative’s flow, unscripted jokes, and displays of emotion that overall contribute to Reeves’ likeability and warmth.

The story reaches a climax when he recounts the morning he received the phone call informing him that he had a donor for a lung transplant, and details the excruciating wait in the hospital room with his family before the surgery. At this point in the performance, the note sheets remained on the table, the notepad was blank, and there was hardly a dry eye in the audience.

Reeves’ doubts, fears, and emotions are the only devices present, and it’s that unadorned truthfulness that is so captivating. He doesn’t attempt to tell the audience how to feel or what to get out of his story, allowing it to take on that much more power and profundity. With breathe. a true story, he’s created an experience that is nothing short of eye-opening.