Theater review: A surrealist take on the Odyssey 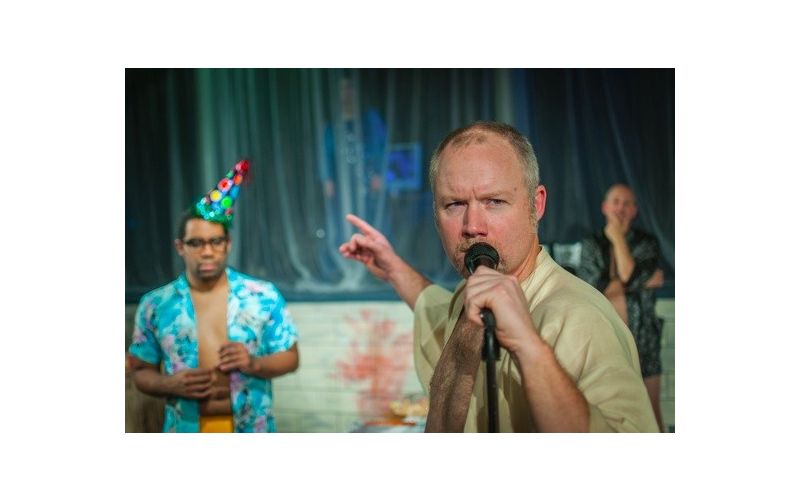 If you see PURE Theatre’s production of Penelope, you’ll likely experience something unlike anything you’ve seen before. (Unless, of course, you are accustomed to hearing compelling ideas about humans and the nature of reality from a group of disillusioned men wearing speedos.)

Penelope, which borrows its premise from the Odyssey, tells the story of four men competing for Penelope’s love while her husband, Odysseus, is away at war. What’s really bizarre, though, is that these men carry on their pursuits from an empty swimming pool just below Penelope’s balcony, a place they seem to have called home for many years. These four men appear to be the last ones standing in a long battle for Penelope’s love; blood from a a fifth man’s recent suicide stains the back wall. There’s no exact time period indicated, but Penelope does use a camera and computer monitor to view her suitor’s speeches of admiration. However, her dress is not contemporary, and certainly the premise of the suitors is a bit outdated.

Playwright Enda Walsh definitely presents a lot of challenges for any daring company attempting this production. Even if the play is supposed to challenge the walls of reality, it is still important that the characters’ objectives are believable — and it’s hard to make believable to a modern audience that four men would spend day after day hopelessly and pathetically begging for one woman’s love.

However, PURE certainly does justice the difficult material. Even if at times it was hard to believe, the four suitors, played by David Mandel, Rodney Lee Rogers, Michael Smallwood, and R.W. Smith, had an incredible connective energy throughout. It’s interesting because in the play, the four men are forced to try to work together in order to prevent their deaths at Odysseus’s imminent return. They are challenged to put aside their individual goals and work collectively together as a means of survival. Even if the characters themselves are not completely successful at this task, the actors were able to come together wonderfully as an ensemble, no doubt with the help of director Sharon Graci.

Penelope is — pleasantly — not a simple, lighthearted night of comedy. Sure, it’s very silly at times, but the material is also dark and intellectually stimulating. (I overheard one nearby audience member remark to his date, “This didn’t make me feel happy or good,” as we exited the theater.) Though the play’s plot is undoubtedly strange, many of the ideas these men bring up in their speeches are relevant and relatable. This, along with these actors’ undying energy and commitment, makes Penelope a production worth seeing.