The Thomas Brothers set their sights on the Folly surfing scene 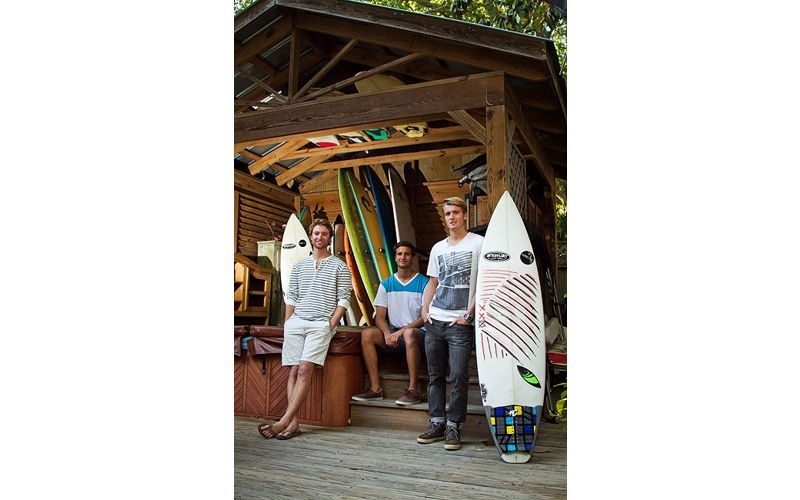 As we walk through the tropical paradise that is the Thomas brothers’ Folly Beach backyard, Bryant, the youngest, asks me, “Do you want to do the interview in the hot tub?” I get the sense he is only half kidding. After sitting down at a table, I lean back and take it all in.

Bamboo mixes with a canopy of palm trees and the seemingly hundreds of tropical plants growing out of ceramic planters in the shapes of different fish. At least 20 surfboards are stacked and piled and leaned against just about every surface, including the hot tub. Bikes and small boats hide in crevices, and it is very clear that this place belongs to folks who don’t spend a whole lot of time indoors. The Thomas brothers also don’t spend a whole lot of time apart. They spend much of every day together, whether they’re surfing, filming surfing, watching surfing, reading about surfing, or surfing behind their boat on the Folly River.

The brothers, whose company, Thomas Brothers Productions, is exploding on the international surf-film scene, are all tall and lean, prototypical surfers. But they don’t act like wave riders. At least not the all-too-typical Spicoli “surfer dude” stereotype. Instead, Robert, 29, who runs the business side, and his younger brothers Ellison, 22, and Bryant, 20, who run the creative side, are all calm, clean-cut, and well-mannered. In short, they are all very clearly not stoned.

The brothers burst onto the scene with their debut surf video, Waves in Our Pocket, last year. Filmed over the course of the last hurricane season, it is the most serious surf film to explore the Folly Beach waves, which the brothers know are — we’ll be nice and say “subpar.” On the back of the DVD, in the credits, it says “Starring Folly Beach,” and it really does, featuring not just the beach but the entire community, which has been extremely supportive of these young filmmakers.

The film, made with the help of McKevlin’s Surf Shop, Surf Bar, and several other Folly establishments, has opened several doors for the brothers and gotten their name on the surf-film map. It has also led to several trips, including to Australia’s Gold Coast, where Bryant and Ellison just spent six weeks filming surfers on the Land Down Under’s legendary beaches.

“We were on the move a lot,” says Bryant of the trip. “We didn’t do anything except surf and film. We just ran up and down the coast chasing the waves.” The guys had a blast, but they are especially psyched about the great reception from the international surf community their early Australian work has received.

“Our name has really gotten out. Now the big surf websites like TransWorld will put anything with our name on it up there,” Robert says. “Surf movies are becoming obsolete, because everything is online, so it’s now all about having sponsors back you, paying for you to go film. And so far, the internet has been great to us.”

The brothers are now organizing frequent filming trips to big surfing destinations. In fact, just a few days after I spoke with them, Bryant was sponsored to go to Costa Rica and film Virginia Beach’s Mike Dunphy and New York’s Balaram Stack for eight days. They are also planning a trip to Nicaragua later this summer, possibly with local surfer Kyle Busey. But even though they intend to visit more and more exotic locales, the guys always miss Folly.

“On the plane coming back from Australia, I was really excited about coming back home to Folly,” Bryant says. “It’s like coming back from vacation. My goal is to always be gone and come back here always. This beach has given us everything. For years we’ve surfed it, given surf lessons, and just become part of this community.”

They’ve also grown as filmmakers since Waves in Our Pocket. “Our work has gotten so much better since that movie,” Ellison says. “Just the knowledge of really knowing what you’re doing, combined with better equipment. And Bryant [who has a film production degree from Trident Tech] has just gotten so much better at editing.”

Robert sums it up bluntly. “Bryant makes it happen. We help,” he says. “I’m a cheerleader and I worry about business and Ellison and Bryant know what they’re doing on the creative side.”

They believe that being siblings makes them stronger business partners. “I definitely think it’s better to have more people involved in it that are all close,” Bryant says. “Because we know each so well, we don’t have to be nice.” Or as Robert puts it, “We’ll have a full-on fist fight and then be good, you know.” He adds, “Bryant actually chucked his phone at Ellison earlier.”

While they are grateful to the Folly community, above all they are glad their parents moved from Florence to Charleston when they were younger, admitting they probably wouldn’t be doing this if not for the move. “I’d probably be a redneck right now shooting deer if our dad had never moved us to the beach,” Ellison says with a chuckle.

Robert echoes Ellison’s sentiments. “Our dad lived in Walterboro growing up,” Robert says. “And they’d drive to Folly as much as they could just to surf. And when we lived in Florence, dad would take us as much as we could. We just stuck with it and truly loved it and dad was eventually like, ‘Let’s just move to the beach.'”

When it comes to Folly, for the Thomas family it was love at first sight. “We came out here surfing one time, and dad just dropped us off at the Washout,” Ellison starts to say before his older brother Robert interrupts him, saying, “And he was driving around and he saw a house for rent and he just rented it, thinking it would be great to have a place to stay out here.” It became clear very quickly that the family, which had first settled in the North Charleston area, might as well move everything to Folly, since none of the boys ever left.

The two younger Thomases competed against each other in surfing contests, getting much better after the move to Folly. They still do compete, although Ellison admits that Bryant usually has the upper hand. But, as Ellison says, “We were not going to be professional surfers, so we thought, how do you still get to hang out with surfers and travel to awesome beaches and just be around surfing? Film them!”

“We always had a video camera when we were kids, just to see us surfing,” says Bryant, who does the heavy lifting on most of the video editing. “Now, I get as much pleasure from filming a great wave as I do surfing. Because when there’s a good swell, I get to hang onto that feeling.” Ellison adds, “Your awesome sessions, they eventually start slipping away, but if you film, you get to keep it.”

A day in the life of Bert’s Market (TEST)

The days at Bert’s Market start a lot earlier than the casual customer might think. From the time the last of the late-night crowd clears out, the third-shift get to work prepping for the morning. It starts with baking biscuits for the breakfast menu and brewing fresh coffee, which is free by the way, all […]

PHOTOS: These 2016 beach looks will keep it hot all season long

A day in the life of Bert’s Market