The Table introduces audiences to a grumpy old piece of cardboard 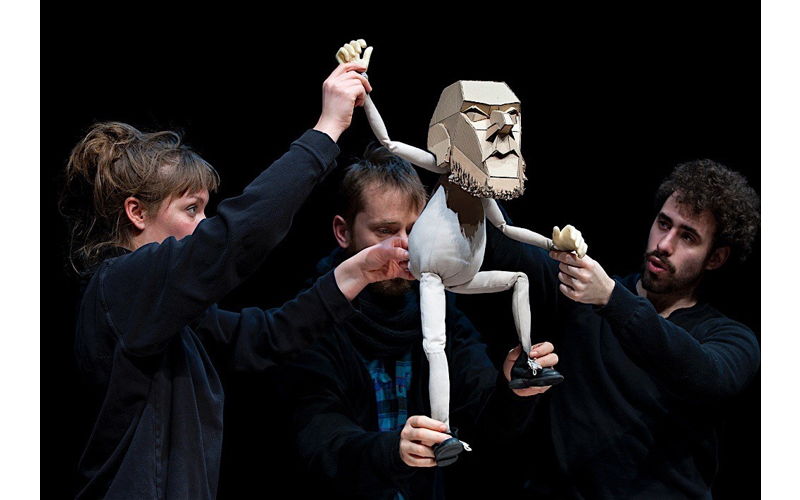 When Mark Down of London-based theater group Blind Summit began working with puppets about 20 years ago, he was unemployed. The new hobby was simply an activity he pursued because it was fun and time-consuming. “And it just got out of hand,” he says.

Now Down travels the world showcasing his works of the puppet theater variety, making his Spoleto debut last year with The Little Match Girl, which he co-directed. This year’s Spoleto pick The Table has received accolades aplenty at the Edinburgh Festival since 2011, with its one and only star, Moses, meeting Charleston audiences for the first time this month.

It was 2009 when Blind Summit’s Nick Barnes created the puppet, with its decidedly cantankerous face, bearded and oversized cardboard head, and slender, cloth body. But back then, he wasn’t Moses.

“We were doing a production of 1984 and we were doing an object prop production, a kind of political theater, with simple clothes and cardboard, and his actual image came from looking at Nazi propaganda,” Down says. “The character he was gonna play was called Goldstein, who’s head of the underground in 1984 and a mythical character, I guess like ISIS. So we went and looked at Nazi propaganda and when we finished making the puppet in three dimensions with a little fat tummy, he was kind of cute. So we didn’t put him into 1984 in the end, because he was just too funny.”

And so Moses was recast in The Table, where he — a lovable, grumpy old man — wins over audiences as a puppet on a table, who knows that he’s a puppet on a table. “He has an existential meltdown,” Down says. “He’s funny but he’s also very angry, and he’s talking about trying to perform the last 12 hours of Moses’ life in real time — on a table.”

The “epic story of God and Moses, life and death, and puppetry” is executed with three people handling the strings — Down on left arm, Fiona Clift on feet, and Tom Espiner on right hand and body, a.k.a. “the bum” — all of whom the audience can see at work. In fact, in the opening segment of the show the actors explain how the puppetry works, the illusion of puppetry.

And what happens then is surprising, or is it? “People, when they’re watching it, they become increasingly doubtful about whether we are all actually puppets on tables, maybe,” Down ponders.

“Yes, I think they do,” he continues. “The more you think he’s alive, the more you wonder if you’re a puppet.”