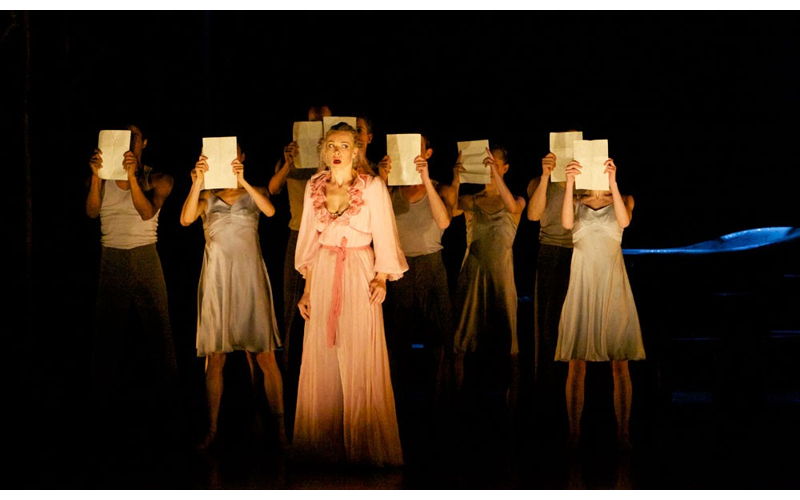 A Streetcar Named Desire, Tennessee Williams’ Pulitzer Prize-winning play, celebrated its 65th anniversary three years ago, prompting the Scottish Ballet to create its own tribute with the help of director Nancy Meckler and choreographer Annabelle Lopez Ochoa. Combining dance with the heaviness of this particular Southern Gothic narrative is something that leaves Eve Mutso, who plays the starring role of Blanche DuBois, profoundly affected.

“The story makes me emotional,” Mutso says. “At the end of the very last scene, I’m always exhausted — damaged, broken. I can’t help but to lose myself in this story. Playing a dark character can be soul destroying.”

Set in 1940s New Orleans, a widowed Blanche relies on her sister and brother-in-law (Stella and Stanley) for support and shelter, but grim revelations and tumultuous turns leave her worse for wear. The only gleam of light comes when Blanche meets the fourth main character, Mitch, a potential suitor and savior — but it’s quickly snuffed out.

Having performed the ballet more than 50 times by now, Mutso says that bringing Blanche to life has been an interesting and satisfying journey. “She’s a complex and edgy character, but also very fragile, and at times can come across as a bit annoying,” she says. “The way we tell the story gives audiences a chance to relate to her misfortunes and perhaps understand her more, I think. I feel like I’m digging deeper and deeper into her being every time we start the performances again, as I’ve had time to layer up such an interesting character.”

The company brings a total of 20 dancers to the performance (plus a chorus), with Blanche present throughout. Mutso says the multi-layered show is glued together with clear, minimalist storytelling, a great soundtrack, and, best of all, organic choreography that perfectly portrays each personality. “Blanche has really distinctive, moth-like movements,” she says. “Stella is earthy and passionate. Stanley’s masculine and aggressive, and Mitch is awkward and shy.”

Andrew Peasgood, a solo dancer for the Ballet, says that the company’s combination of dance with the scenery is seamless. “It’s all classically based with an overhang of neo- and contemporary,” he says. “A Streetcar Named Desire contains so much narrative that the trick is to pull the acting and dancing together without anyone thinking, ‘Hmm, that’s unusual.'”

Peasgood performs two different roles within the ballet on separate nights. “The first is a role where I play different characters representing different situations and scenarios throughout Blanche’s life,” he says. “For example, at one stage I play a young bellboy delivering a drink to Blanche at the hotel she is staying at, and she confuses me with a reminiscent thought of her suicidal young husband. Then, at another stage, I am a character in the bowling team against Stanley, where there is plenty of testosterone and competition in the air as the two teams square each other off.”

The second character Peasgood plays is more complex and singular; it’s Alan, Blanche’s young husband. “This role is complex, because he is only briefly mentioned throughout the play so creating a character for Alan’s personality was a challenge,” he says. “He falls in love with Blanche and they marry young, only for Alan to discover he has feelings for a man. Blanche later finds out and Alan can’t cope with the situation, which leads to his suicide.”

For Peasgood, it’s also the genius of Williams himself — the way he draws so much detail into a single scene without complicating it — that allows for such a smooth interpretation. “He also manages to deliver emotion without the reader having to find it themselves,” Peasgood says. “It’s just there.”

Neither Peasgood nor Mutso was familiar with Williams before the show began in 2012. Now, they’re both fans. “I think the way he wrote about complicated individuals is very true, and that’s why audiences can really understand and relate to it — we all struggle one way or another,” Mutso says. “Human beings are interesting. It’s not our abilities that show who we really are, but our choices.”

With almost uncomfortably true insights into the lives of everyday people, one Williams story alone can render a lifetime’s worth of words to live by. And A Streetcar Named Desire is a certainly an accurate representation of the memorable narratives this author and playwright has left us with.

Mutso agrees. “This story is so colorful and rich and unique for a ballet company to tackle,” she says. “I would say simplicity is the key in storytelling. Only then you can see those real characters through and through and let this story develop in front of your eyes. It’s moving, disturbing, and real — and that’s the beauty of it.”

Shakespeare’s Globe has left the Dock Street, Taylor Mac has packed up his golden headdress, and Geoff Nuttall and his merry band of chamber musicians have gone their separate ways. In other words, Spoleto Festival USA 2015 has wrapped up, leaving everything from sublime inspiration (A Streetcar Named Desire, Carlos Aguirre, Romeo and Juliet) to existential horror (Decasia, When It Rains) in its wake.

St. Paul and the Broken Bones had us dancin’ in the dark