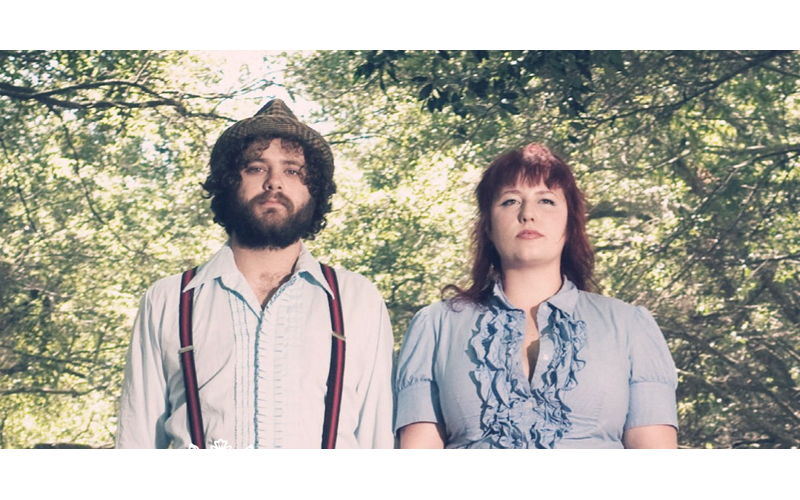 Lily Slay and Mackie Boles know all about irony and contrast. In their country/blues-tinged songs, they prefer to put a snappy rhythm and a witty melody on a sleazy tale. As the songwriting team at the core of the Royal Tinfoil, they romanticize the failings and failures of themselves and their friends, imaginary and real, and they harmonize beautifully over nasty lyrics that would offend even the most steadfast listener. It’s all well documented on their new album Well Water Communion, which chronicles tales of various lowlifes — from nearly dead lovers and bourbon-soaked scamps to pesky little devils and toenail-collecting stalkers. There’s a sweet, romantic side to some of the songs, and plenty of humor, too.

“We had kind of a Donnie and Marie thing where I was a little bit country and he was a little bit rock ‘n’ roll,” Slay says of their early days. Actually, they seemed a little more like the dressy-but-dysfunctional duo of Dolly Parton and Porter Wagoner (circa 1969) crossed with some of the boozy and dangerous vibes of Nick Cave-PJ Harvey’s swanky duets.

This week, the Royal Tinfoil celebrate the long-awaited release of the self-produced Well Water Communion. In their rollicking theme song (the closing, hidden track), Boles sings, “Since we ain’t classy/We’re bold and we’re brassy/When we get out on parole.” Slay follows in the next verse, “We are the black sheep down in your trash heap/Stalking the squirrels with guns.” That kind of devilish mischief permeates the collection.

When the Royal Tinfoil formed three years ago, Slay was going by the stage name Sabbath Lily Hawks, while Boles used the moniker the Rev. Lamont Bowles. An early band bio pegged Slay as a “drunken streetwalker stuck in a boxcar” and described Boles as a “traveling salesman out on bail for mysterious charges.”

What began as a shambling, skeletal duo with occasional guests on washboards, washtubs, and junkyard instruments gradually transformed into a solid quintet with Brad “Baby Rad” Edwardson on double-bass and Tim Edgar (a.k.a. Tim the Edgar) on ukulele and harmonica. Both Edwardson and Edgar play in local troupe the Flat Foot Floozies. Drummer Marshall Hudson, a bandmate of Boles in rock trio Tickle Switch, rounds out the lineup.

“Brad can play a lot of gyspy-swing, and he brings energy from the bottom,” Slay says. “Brad and Edgar work really well together. Marshall is more of a rock drummer.”

Two years ago, the twosome entered a studio for their first time and recorded some of their strongest original material with engineer Nat Mundy at Awendaw Green’s sound room. That session was essentially a practice run for an intense, three-day session at Planet Paul Recording in Wichita, Kan., with hired timekeeper Kyle Couch, bassist Artie Elmer, and washboard player Scott Frank.

“The drummer thought it was going to be a blues or bluegrass session, but it took us like two hours to do a good take of the first song,” Boles remembers. “He was great, but he had to deal with us teaching him the weird songs along the way, totally on the fly. After we did the first song, he took a break, went to the store, and came back with a handle of Jack Daniel’s. Things went OK from there.”

Slay and Boles had been on the road opening for wild gypsy-rockers Viva le Vox, a hard-touring quartet from Lake Worth, Fla. It’s safe to say that no one was well rested or clear-headed by the time they got the Kansas studio. Their spirits were high, though.

“The guys from Viva le Vox helped us out a shit-ton on the road,” Boles says. “The first time we ever went out on the road was with them heading to their hometown in Florida. We usually ended up spending money, getting hammered, and getting kicked out of clubs. It was crazy all the time.”

A low-budget studio session a few weeks into a weird tour might not have been ideal, but Slay and Boles made the best of it. There’s plenty of raw emotion and gritty guitar work on Well Water Communion, but there’s also a keen sense of arrangement and songcraft on display.

“It was tough, but I do think we came out with the organic sound we wanted,” Slay says. “We were road-weary and hoarse. Mackie’s voice was kind of gone, so he sounded like Tom Waits on some of the songs.”

Boles and Slay primarily played acoustic six-strings through little amps in the band’s early days, and this acoustic-based style is well displayed on Well Water Communion. But they’ve pretty much gone electric these days. The country twang and rich guitar tones are still prevalent in their overall sound, though, and the new bandmates blend in nicely. They may be inching toward a traditional guitar-based rock band set-up, but their quirks and weird songcraft remains intact.

The Tinfoils booked time at Truphonic Recording Studios in West Ashley in July. They’ll enter with a new batch of rascally blues, country, and weirdo-rock songs with engineer/producer MJ Fick at the helm. Boles and Slay look forward to exploring the big recording rooms and analog gear at the facility — and they’re eager to push the solidified band ahead at full steam.

The Royal Tinfoil headline a CD release show at the Pour House on Sat. May 26. They also perform at the Drop In Deli on Thurs. May 24 and at Earshot Records at 12 p.m. on Sat. May 26.