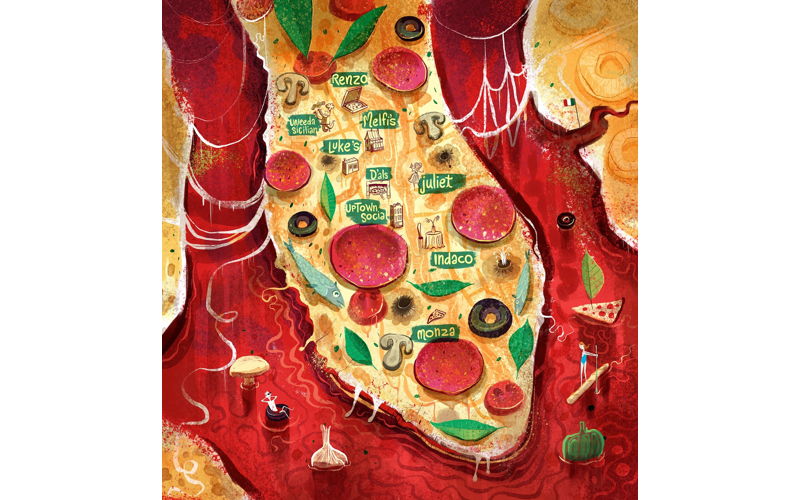 At some point you’ve probably heard someone say: “there’s no bad pizza” followed by a smug smirk of self congratulatory culinary openness. These are the people your momma told you about. Avoid them, at least when making dining decisions. Of course there’s terrible pizza. Venture down the buffet at your local all-you-can-eat pizza franchise and it will disabuse you of that notion. Luckily, Charleston has longtime standbys and a batch of new pizza joints with quality ‘za offerings. New options in Mt. Pleasant, West Ashley, and the upper peninsula are welcome additions to their neighborhoods — but no area has a greater concentration than the upper King to Huger corridor. There are currently nine places within a mile radius (and more coming). It’s our own pizza district.

Elliotborough favorite and oldest pizzeria on this list, D’Allesandro’s began its run of serving pizza to hungry College of Charleston students and nighttime imbibers in 2006. Ask longtime Charlestonians what their favorite pizza is and there’s a good chance the answer will be D’Al’s. Brothers Ben and Nick D’Allesandro churn out thin crust pies from their funky, rotating shelf, gas oven in an eclectic neighborhood corner shop. Populated by college students, families out for pizza night, and the occasional lone food writer, D’Al’s caters to all. In a town filled with highfalutin pizza joints, D’Al’s sincere pies and quirky personality (look up their 2016 music video) still keep the place packed. Regulars’ favorites are often the Chauncinator, a margherita minus the tomatoes and add double pepperoni or the Get Gnarly, an olive oil base with balsamic-roasted chicken, spinach, mozz, and bleu cheese crumbles.

Another longtime peninsula pizza essential and ode to Formula 1 racing, Monza bakes Neapolitan pies in a wood-fired oven using imported Italian flour and yeast with pH balanced water. Simplicity shines on the racing themed pizzas. The Count Louis (named after English racer Louis Zombrowski, who was killed at Monza racetrack in 1924 and who also happened to be the designer and driver of Chitty-Chitty-Bang-Bang) is a crispy, lightly charred pie with fresh tomato sauce, roasted mushrooms, mozz, and large slices of spicy pepperoni. The VonTrips (named after Wolfgang von Trips, another famous driver killed at Monza in 1961) combines fresh tomato sauce, mozz, sausage, and seasonal greens. The combo screams to add the optional farm egg.

While you’d be satisfied with the roast half chicken or black pepper tagliatelle or possibly the fried artichokes or charred octopus at King Street trattoria Indaco, missing out on their pizzas would be a shame. Neapolitan in style, the pizzas come out of the wood-fired oven with a nicely charred cornicione (that’s pizza nerd-speak for the airy, charred outside crust) and a crisp undercrust with simple toppings from a long list of local purveyors. The corn pizza is one of the best pizzas in town. Same amazing crust with sweet corn, ricotta, green onion, basil and ‘nduja, a funky, spicy, spreadable salami. It hits all the good notes of spicy, sweet, bitter, funky, and fatty. If something a little brighter is more your speed, the clam pizza with lemon, garlic, sea beans, basil, and Parm studded with littleneck clams will satisfy. Come during happy hour and have a few $6 Negronis and half-off pizza.

King street newcomer Uptown Social is a sports pub and event space with 50ish TVs, a 60-foot bar, and some of the sneakiest good pizza downtown. Breaking away from the Neapolitan style, Uptown Social serves “thin and crispy bar pies.” These pizzas feature a dough that doesn’t produce the large rising crust found on Neapolitan pies. It comes out extra crunchy with cheese and toppings almost to the edge. The concept came about with some consultation help from Anthony Falco, formerly of Brooklyn’s legendary Roberta’s Pizza in Brooklyn. The light pizzas are perfect for an afternoon of football and possibly that many beers. Their most popular is the Amsterdam. A fresh tomato sauce base with aged mozz, jalapenos, pepperoni, sausage, shrooms, and Parmigiano-Reggiano’s younger cousin: Grana Padano. The Falco is their version of the classic margherita with aged mozz and Grana Padano.

Ristorante Juliet is another King Street trattoria-esque restaurant with pizza, pastas, and apps. Occupying the old Butcher and Bee space near High Wire Distilling just past the giant Shep Fairey mural, look for the large neon “Pizza” sign behind the plate glass above the door. Pizzas coming from Juliet’s oven have a very light but sturdy crust with an impressive level of char and airy cornicione. With nine different pies to choose from, Juliet’s menu ranges from the classic Margherita to the Speck and Gorgonzola, a rich pie that includes slices of speck and dark figs surrounded by pools of gorgonzola and vincotto, a sweet caramelized unfermented grape reduction. The prosciutto and arugula pie sits somewhere in the middle with large dollops of burrata over peppery arugula and blankets of chewy prosciutto.

The slogan, #pizzaforever adorns Luke’s Craft Pizza’s website and co-owner Luke Davis’ career so far has him traveling that path. Davis moved to Charleston in 2013 and spent time in front of the oven at some of the city’s craft pizza titans, Monza and EVO. Davis came up with his own style of pizza which he reluctantly describes as “hybrid wood-fired and New York.” His specialty oven allows him to direct heat only from the top to “somewhat mimic a wood-fired oven.” At upwards of 700 degrees, pizzas are in and out of the oven in four minutes. The pizzas are simple 14-inch pies with a chewy, sturdy crust from dough Davis makes and lets rise for 24 hours. All the pies start with one of three bases (crushed tomato, creamy ricotta, or olive oil and garlic), mozzarella and asiago cheese, and are topped with locally sourced ingredients including speck, casalingo salami, castelvetrano olives, house-made fennel sausage, pickled banana peppers, and pickled jalapenos. There are no standard combos on the menu, customers must pick and choose their own. The only exception is whatever daily special Davis comes up with. One word of warning, Luke’s only makes 50 pies a night. This isn’t born from some zen idea of how many pizzas make the perfect man. It’s simply the weight of 14 hour days, Davis being the only pizzaiolo, prep cook, and dishwasher, not to mention the factors of “time, space, and energy.” They do sell out, and when they do that’s it. So call ahead.

Huger Street hip cocktail bar and bistro Renzo is brought to you by the people behind another hip Huger Street cocktail bar, the Faculty Lounge. Serving wood-fired pizzas and natural wines in their true-to-life corner neighborhood restaurant location, it’s a place that feels like you could visit a few times a week. They describe their pizzas as neo-Neapolitan, a slight divergence from traditional Neapolitan in that they use wild yeast in their dough starter and the flour is a blend of Anson Mills Red Fife and Abruzzi rye flours. Consistent char and leopard spotting (the little spots of black on the crust), puffiness of the crust, and a sturdiness to handle the various toppings lay the foundation for some of the most creative pizzas in the district. The nine pizzas listed on the menu include the ever-present margherita; the Wrath of Kahan featuring Spanish ingredients like caramelized medjool dates and spicy chouriço sausage on a bed of piquant piquillo pepper sauce; and the Shabazi, a mid-East inspired pie with fresh tomato sauce, lamb meatballs, shaved garlic, and a mound of fresh parsley served with a duo of spicing and cooling zhug (a green herbal Yemeni-Jewish hot sauce), and yogurt. If you come during happy hour (3-5 p.m. daily) you can get a slice of their take on the Detroit style: a tall square of crispy edged crust with an airy crumb and a thin layer of cheddar and muenster cheese, topped by tomato sauce and a grating of Parmigiano-Reggiano. And while not pizza, the boquerones and grapefruit appetizer with a sherry cocktail is an amazing start to the night at Renzo.

With the many slices of thinner crusted pizza dotting the map, the thick crunchy “grandma” style pizza at Uneeda Sicilian is a nice change. A quarter-inch crust baked in a pan that gives the surface serious crunch with a softer interior, the exterior almost has a fried dough texture. The only pizzas available are cheese, pepperoni, sausage and broccoli rabe, and sweet onion and rabe. You should get the sausage and rabe. The square pizza is cut into nine equal sized slices (though some poor soul will miss out on any outside crust) and each weighty slice has the toppings evenly distributed. With the sausage and rabe each slice has an even layer of sweet and slightly acidic tomato sauce, cheese, thin curly slices of sausage, and a nice mound of spicy broccoli rabe. Bonus, Uneeda serves pizza by the slice if you need to feed your inner fat kid while on the move.

At the time of this article, Melfi’s was in the final stages of opening, targeting early September. Co-owner Brook Reitz gave us a little preview on what to expect at the sister restaurant to Leon’s and Little Jack’s. Melfi’s will be an “Italian restaurant with a particular emphasis on pizza, that’s the largest part of the menu.” The pizzas will be what Reitz calls “Roman-ish” based on a style he and his partners experienced in Rome called Pizza al Tonda. A lighter style with a thin very crispy cracker-like crust called scrocchiarella, that “[customers] can eat and still feel good. And that thin crust is just less dough.” Some toppings will stray from the traditional (one pie is covered in shredded iceberg lettuce) but in general they will be “pizzas we liked to eat growing up merged with this thin crust style from Rome.” Along with the pizzas on the menu will be a Roman friti (fried food; Rome is proud of its fried food) section and hand extruded pastas.

All of Charleston’s pizza places

At Dellz on the Macon, guilt-free pies are the name of the game