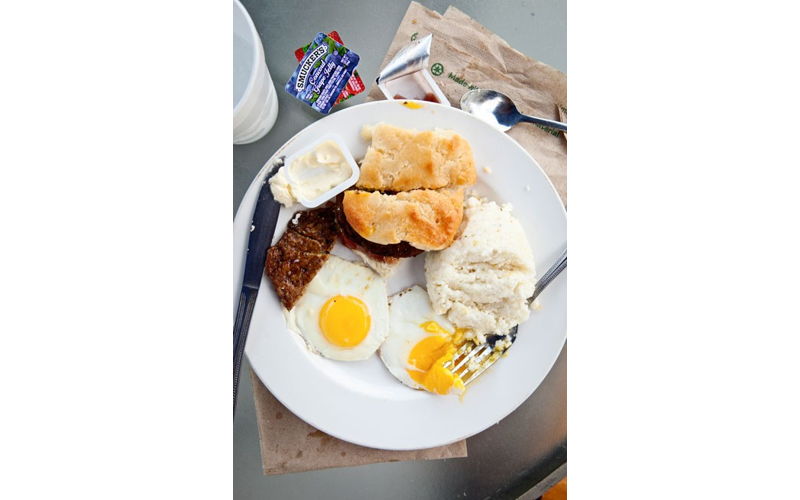 There is perhaps no greater tragedy than walking into a restaurant at 11:30 in the morning, craving french toast and sausage, only to be told that breakfast service ended promptly at 11 a.m. A sad examination of the lunch offerings will ensue, and no matter how delicious that burger or BLT is, the sinking feeling that something is missing still persists.

But that potential disappointment is being alleviated by the happy trend of all-day breakfast. Recently opened restaurants like the Rarebit and Rutledge Cab Co. have debuted menus that include breakfast options available past noon.

While building the menu for the Rarebit, consulting executive chef Brannon Florie reminisced about the food and beverage crowd that used to pack the Huddle House on the corner of Ann and King streets more than a decade ago. “We have a good food and bev crowd that likes to stop in on their way to work and grab [breakfast],” Florie says. Among Rarebit’s most popular breakfast dishes are the huevos rancheros, two corn tortillas fried golden and smothered with a black bean puree, fried eggs with runny yolks, and spicy salsa.

Further uptown, Rutledge Cab Co.’s reasons for embracing the all-day breakfast are two-fold. The first is to become a true neighborhood restaurant by catering to the mixture of service industry professionals and creative freelancers who populate the area. The second reason is more personal, as owner and executive chef Robert Carter, who helmed Peninsula Grill for years, wanted to be clear that Rutledge Cab was not upscale fine dining. “If I serve breakfast all day, that cuts all the pretentiousness, right there,” Carter says. Perhaps the biggest standout among the breakfast offerings is the corned beef hash, freshly pulled, and served with a hearty plate of eggs, toast, and grits or breakfast potatoes.

A major catalyst for the trend might be breakfast’s claim on one of the most popular foods of the past decade. Bacon may have started out as a breakfast staple, but its addition to everything from ice cream to guacamole has transformed it into one of the most buzzed about ingredients in recent memory. But after years of bacon-mania, many diners are fatigued by bacon maple donuts and bacon-infused bloody Marys. Instead, a humble plate of eggs, bacon, and toast have become the more appropriate way to satisfy the craving. The basic spread is perfected at downtown greasy spoon Dixie Supply Bakery & Cafe, where the Dixie Breakfast Special combines two eggs, home fries, bacon, and toast.

Savory variations to classic breakfast dishes have helped lend a legitimacy to their position on menus well into lunch and dinner. The Early Burger at Early Bird Diner is a prime example — a classic patty melt is topped with bacon, cheddar, and egg to produce a yolky mess of a sandwich that can be enjoyed any time of day. The Charleston Surf and Turf at Toast is a reliable all-day breakfast dish, combining marinated ribeye and poached eggs with grilled shrimp on an English muffin.

For some, breakfast’s place is still in the morning, albeit the early morning hours after a long night of drinking. No other establishment can be applauded as a pioneer of the all-day breakfast trend quite like Waffle House. What could be better for the over-served imbiber than some scattered, smothered, covered, and chunked hashbrowns served alongside a plate of waffles, some thin grits, mercifully not stone ground, and cheese eggs with raisin toast? We’re thinking, not much.

When it comes to a menu, form does not follow function. It follows philosophy. In fact, you can learn a lot about the culinary spirit of the times just by examining the physical format of restaurant menus.