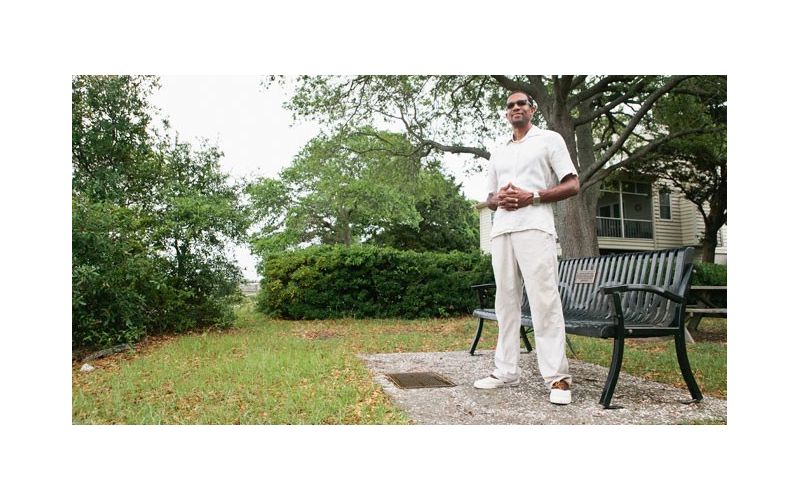 Azikiwe Chandler’s mother passed away a couple of years ago, but he doesn’t like to visit her grave. He thinks that act honors death, not life. But Chandler knows that visiting that site is a way to remember the qualities she possessed and passed on to him, the lessons she taught him that he wants to live by. So Chandler goes.

And at least he has a grave to visit — the same isn’t true for Chandler’s other ancestors, those lost on the Middle Passage. Historians estimate that millions of Africans perished as they were transported across the Atlantic Ocean to America to be sold as slaves. Victims of abuse, disease, and suicide, their bodies were abandoned in a mass, anonymous grave.

The Charleston Middle Passage REMEMBRANCE Program, which takes place Sat. June 8 at 9 a.m. at Fort Moultrie on Sullivan’s Island, pays homage to those lost in the slave trade, or, as Chandler calls it, the African holocaust.

“We don’t know their names, we don’t know exactly where their graves are, but we do know that anywhere from 10 to 20 percent of those who made the voyage didn’t actually survive the voyage,” says Chandler, the lead organizer of the event. And the Lowcountry played a big role in the devastation. “By some historians’ accounts, anywhere from half to three-quarters of Africans who became slaves in the United States actually came through the port of Charleston, so it’s very significant in terms of the triangle trade and the number of souls who would have entered the New World through here.”

The ceremony, hosted by the Charleston Remembrance Committee, is now in its 16th year locally. The group was originally helmed by Chandler’s father, Osei Chandler, and Deborah Wright, who based their event after a ceremony that took place in Brooklyn. Chandler took over from his father two years ago.

The day begins at Fort Moultrie with a history lesson on the Middle Passage and the triangle slave trade, which will be led by professor Jim Campbell this year. He’s a well-known African-American studies historian who’s on faculty at Stanford University. From there, attendees will follow a procession of drums and African dancers to the Sullivan’s Island beach. They’ll be invited to dip their feet and ankles into the water, and they’ll see where the slave ships may have docked.

The group will proceed from there to the “Bench by the Road,” which was placed near the water by author Toni Morrison and her Toni Morrison Society in 2008. “Toni Morrison remarked some years ago that while we have statues and monuments to ‘great men’ all over the country, we don’t have markers marking where Africans would have entered the country and where slave rebellions would have been led,” Chandler says. The benches have been placed across the country at sites that are historically significant for African Americans.

Clergy will be invited to give blessings, and the “congregation” there can offer prayers and comments. The hosts will then collect donations for those who perished, which will be placed together on a sheet. “We take offerings of fruit and flowers, the flowers for beautification, the fruit for nourishment,” Chandler explains. At 12 p.m. sharp, the clergy will bless those lost with a libation, at the exact moment as other ceremonies in Panama, Brazil, New York, San Francisco, and Africa do the same. The offerings will be thrown into the waterway to adorn the watery grave. The ceremony will end with a drum circle and more prayer, if people are inclined.

“One of the things we like to stress is that it’s not really about feeling sorry for ourselves, but realizing we’re actually beneficiaries, that those who perished perished, but that those who survived had to be strong enough to survive,” Chandler says. “It’s a brutal and dreadful legacy in terms of the brutality of the institution of slavery, but we have to be a strong people to have come through that and to be able to survive, and so now it’s up to us to make the most of this life that was granted to us by those ancestors that did survive.”

The REMEMBRANCE event usually draws 40-60 people, but it hit its highest attendance level last year with about 100 attendees. Chandler says it’s a diverse crowd, mainly made up of African Americans, but not exclusively.

Chandler says the ceremony affects the participants for different reasons. Some come year after year as a reminder that there were others who sacrificed their lives for the existence of future generations. Others want to learn. “There are those who come and are reinvigorated, rejuvenated, rededicated as a result of attending,” he says. “There are those who come to bring their children so that their children can have a better understanding of the history of it and see that they now have a responsibility as well to continue and to struggle and to survive and to progress.”

More than anything else, Chandler hopes people will attend to become educated and to pay respect to those who made Charleston as we know it possible.

“As African Americans, we can look at them and say that they’re our ancestors and those who did survive paved the way for us to survive,” he says. “But even as European Americans, we can look at the wealth of Charleston and know that Charleston derived a great deal of its wealth from rice and the growing of rice, and that the majority of Africans who ended up coming through Charleston and being enslaved in Charleston were part of that rice culture. They were brought here because of their knowledge and wisdom in terms of planting and cultivating rice. So we can give thanks to them for their contributions to the wealth of this city.”