The Mellings grow beautiful things at the hydroponic Kurios Farms 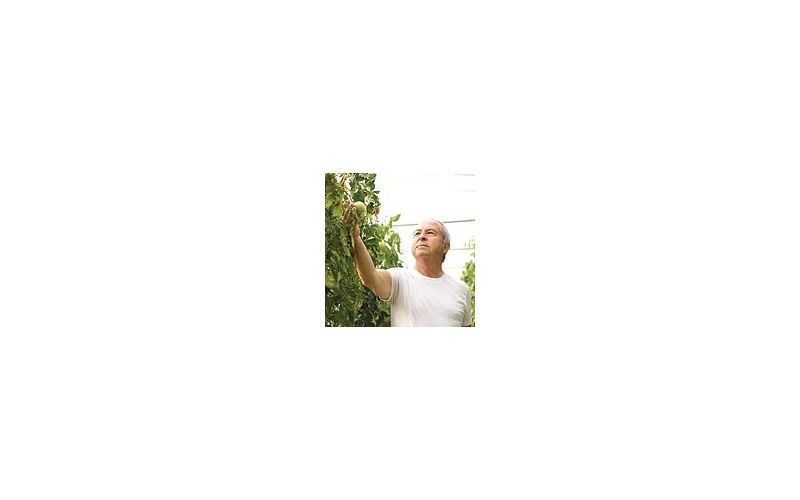 You might have noticed a most intriguing cherry tomato garnishing plates around town lately. It’s almost purple — possessing a rather swarthy coloring — and its flavor is even more complex. First comes sweetness, followed by a heady, earthy flavor, bringing to mind dark, rich soil. This is most ironic considering these tomatoes are grown without any dirt whatsoever. Wes and Juanita Melling cultivate these Black Cherry Tomatoes (an heirloom variety) in their entirely hydroponic greenhouse in Moncks Corner.

There at Kurios Farms, they have 1,440 plants, predominately tomatoes but also Bibb lettuce and cucumbers. If you have never seen a hydroponic setup, it really is something to behold. From the outside it might be just another greenhouse, a large white structure made of galvanized metal tubing with a plastic skin. Even when you first enter the greenhouse, it doesn’t look so foreign. Row upon row of plants climb up wire trellises, and happy fruit hangs from vines. Then you look down and notice there happens to be no dirt anywhere. Wes grows his plants in perlite, a crushed volcanic rock, and a maze of plastic tubes connects the plants. Water runs through these tubes delivering nutrients like calcium and pot ash, and this entire process is controlled by a silent sentinel that hangs on the front wall.

If you made a quick tour of the place you might not even notice this Grower’s Choice computer, which controls all of the variables: humidity, temperature, feeding, cooling, and air flow. During the height of the season, the plants are fed every 20 minutes — in three minute stretches each time — and they use 1,500 gallons of water each day.

The Mellings moved to South Carolina from Ohio in 1999. Wes had worked in management at BF Goodrich for 12 years when they decided to move away from the weather.

Wes says the hydroponic idea came from a magazine that described how you could make as much money off an eighth of an indoor acre as you could off 100 outdoor acres. Basically, the greenhouse would cost the same as a large tractor.

The Mellings sell their crops from the small storefront connected to the greenhouse and at the Summerville farmers’ market. Their season happens to be a bit different from outdoor farming as it begins in November and ends in July. The plants must be torn out once a year, and this happens to be the perfect time due to the extreme heat and abundance of local tomatoes (which drives the prices down.) This alternative growing season works out especially well for restaurants, allowing them to count on a consistent product during the winter months. In the cooler months, EVO uses their vine ripe tomatoes for roasted tomato and basil soup and in the warmer months they make excellent gazpacho.

Currently, the Mellings live in a mobile home beside the greenhouse, and they are in the process of building a permanent home behind it.

The Mellings’ son Jarrod works with them, and Wes hopes he will take over the bulk of the work in the next few years. For now, his help proves invaluable with the more physical aspects of the job like walking around on stilts to lower the plants when they reach the top of the trellis. It’s idiosyncrasies like this that make hydroponic gardening so unique and add a certain intrigue to the entire process. But when you ask Wes how he most enjoys his own product he gives a simple answer. “The tomatoes are nice sliced, and the lettuce is good on sandwiches,” he says.

Charleston leads the South into the culinary future

We are a food town, built on tourism and grits and addictive little sesame wafers, and Charleston holds its culinary heritage in high esteem. Locals defend their favorite spots with a fervor normally associated with professional sports teams or political parties.

Charleston gets all wrapped up in fish tacos

The sweet kernels of summer burst out all over town