The Magwoods keep the heads on and the freshness intact 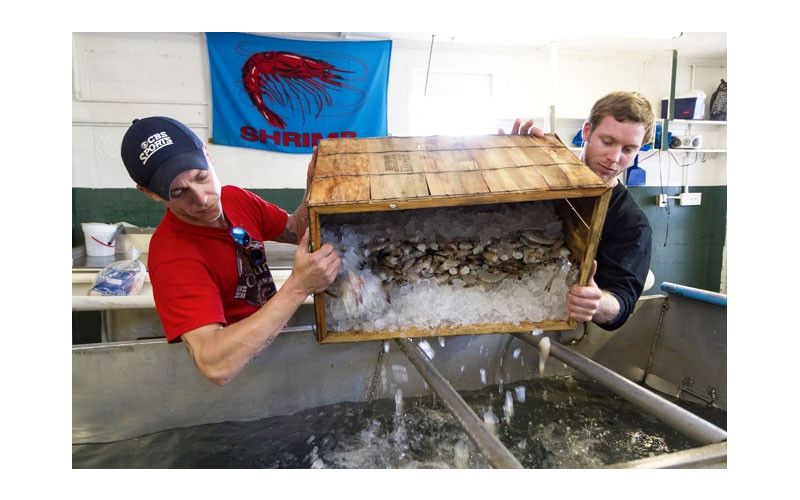 To get to C. A. Magwood, Jr. & Sons, you cross Shem Creek on Coleman Boulevard, turn right onto Live Oak Drive, and make your way into Mt. Pleasant’s Old Village. Take a quick little jog under the old oaks onto Magwood Lane and then a left onto Haddrell Street, and all the way down at the end of the road you’ll see a modest sign with red stripes and blue stars pointing to an old white cinderblock building at the end of a gravel drive. If you see “Live & Love Longer, Eat Seafood” emblazoned on the wall in hand-painted red and blue letters, you know you’re in the right spot.

It’s a little off the beaten path, but Magwood’s is one of the last remaining retail stands where you can get ocean shrimp fresh off the boat, and it has a loyal local following. From the beginning of the season in early summer straight through January, customers call ahead to ask when a boat is arriving and wait with empty coolers while the shrimp is unloaded.

C. A. Magwood, Jr. & Sons — named for Clarence Magwood and his two sons, Wayne and Scotty — has been in business since 1972, long enough to witness the local shrimp industry’s boom as well as its slow decline.

At the peak in the 1980s, almost a hundred trawlers operated out of Shem Creek, supplying shellfish to wholesalers and grocery stores from New York to Florida. Then, in a vicious squeeze-play, foreign shrimp started driving down prices, while at the same time rising fuel bills and waterfront property values drove up costs. The imported stuff — much of it pond-raised, flash-frozen, and shipped thousands of miles — now accounts for more than 90 percent of the American market. The number of trawlers working out of Shem Creek is now down to around 10.

Wayne Magwood has been active in trying to reverse this trend. As president of the South Carolina Shrimpers Association, he has become something of a local PR rep for the industry. His shrimp boat, the Winds of Fortune, has been featured on the Discovery Channel and the Weather Channel, and it still makes daily runs during the shrimp season, heading out at 4 a.m. and arriving back in the late afternoon.

The economics are daunting, but local shrimpers have one trump card remaining in their hand: the quality of their product. All the shrimp sold at Magwood’s comes from trawlers working local waters. It’s always fresh — caught and sold the same day — with no chemicals or preservatives. And while they’ll gladly sell you shrimp with the heads removed, Magwood’s is one of the only places around where you can buy shrimp with the heads still on.

Though Magwoods and other suppliers can deliver fresh shrimp to Two Boroughs’ back door, Keeler says he prefers to head over to Shem Creek and pick it up himself. It’s both a nice break from the kitchen and a way to get a little more connected to the source of the food. He gets there early in the morning before the previous day’s catch is gone or, when he can, in the late afternoon as the trawlers are chugging in from their day on the water and unloading shrimp that were swimming in the ocean just a few hours before.

Keeler always buys heads-on. For some dishes, like the roasted garlic shrimp appetizer, serving whole shrimp complete with heads makes for a more dramatic presentation. For others, Keeler and his crew remove the heads but use them to make shrimp stock, since the heads impart a rich, vibrant flavor that you can’t get any other way.

The biggest reason, though, is freshness. “When you buy it heads-on, you get shrimp that has stayed in the water longer,” Keeler says, “It’s had fewer hands touch it.”

It makes a huge difference. Not too long ago, I dined at Two Boroughs Larder with a landlubber friend from Atlanta, and he couldn’t stop raving about that roasted garlic shrimp. They are layered head-to-tail in a circular stack and topped with a colorful pile of green pea shoots, thin-shaved squash and radishes, roasted garlic, and bright-red lipstick peppers. But it wasn’t the presentation that wowed him (and me as well), it was the flavor. “This is absolutely the best shrimp I’ve ever had,” my friend said. “You can actually taste the sea water.”

Keeler agrees, “The clean brininess you get from really fresh shrimp is the best part.”