The Library boasts a unique setting but predictable food 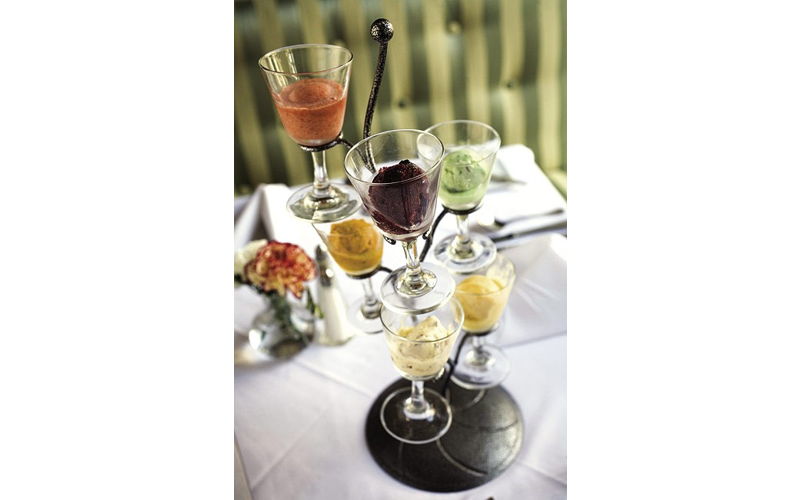 On a recent weeknight, I sat down for dinner with three friends at the Library Restaurant in the Vendue Inn. We had been loosening up and laughing a lot with a cocktail or two up on the Inn’s popular Rooftop Bar, and then we moved downstairs and tucked into the Library’s unusually small, formal, and quiet dining room, right next to a warm fire. The other diners in the restaurant (who were all within earshot) were getting on in years (it was 6:45 p.m., after all), and for whatever reason they weren’t talking much. A few minutes after we sat down, one of my friends whispered, “I just don’t understand why nobody talks in this restaurant.” We all laughed because we had been thinking the same thing, but we weren’t quite ready to acknowledge the quiet mood. Maybe we hoped our buzzes would change the energy of the room.

It’s an interesting and cozy space, for sure. French doors that almost feel like windows open right into the Library’s historic dining room (there’s another one they use for dinner when necessary). When we walked through them, we were immediately standing among the white-clothed tables. The room feels about 8 feet wide by 20 feet long, and it’s decorated with classic, conservative, and formal English/French accoutrements: old portraits (presumably) of wealthy planters and merchants’ families, historic maps detailing the French Quarter’s antebellum warehouses and shops, wrought iron, and elegant chandeliers. Everything about the Library says, “This is a special place with historic significance.” It’s a recollection and recreation of the wealth and privilege Charleston was once known for. It creates high expectations.

We shared a few things to get a good feel for the cooking. The bourbon acorn squash bisque ($8) was cream-based and very rich, slightly sweet puréed acorn squash with a hint of bourbon and plenty of cream — good and tough to get wrong. The purée relies on the fat of cream and a silky texture for its elegance. The fried green tomato and crab cake stack was a predictable take on a couple of Lowcountry standards. The crab cake and tomatoes were encrusted in cornmeal and fried and served with a five-herb cream and red pepper coulis. It was well done but not unusual or especially great. A Charleston first-timer would probably be more impressed than we were.

The salads were pretty good too. The port wine poached pear salad with candied walnuts, Stilton blue cheese, and a port wine vinaigrette ($11) was a solid version of the standard fruit-nut-cheese salad composition and seemed like it had just come out of the refrigerator because it was so cold. The pear had good flavor, and the blue cheese played well against the reduced port vinaigrette. The beet salad with goat cheese, applewood smoked bacon, and mixed lettuces ($10) was even better but still felt somewhat unexceptional. Ditto the arugula, charred sweet corn, and roasted red bell pepper salad with red onion marmalade ($10).

Entrée-wise, the antelope shepherd’s pie ($28) sounded interesting enough. Along with the lamb burger, it was one of the most unusual mains on a list that relied on the meat-starch-vegetable-sauce formula. The waiter explained that it was an inverted shepherd’s pie rather than a traditional one, but when it arrived it was just a helping of rosemary and roasted garlic mashed potatoes with a heaping mound of ground antelope, all topped with melted grated cheddar cheese. The antelope actually tasted great, but of all the options for creating an unusual shepherd’s pie, I felt like this one was kind of odd.

The duck two ways ($31) was a breaded and fried duck leg confit, plus a pan-seared duck breast along with roasted garlic sweet potatoes, braised mustard greens, duck jus, and cherry mustard sauce. The friend who ordered it couldn’t put his finger on it, but it just didn’t excite him much. I tried it and agreed. Like most everything, it was fine, but lacked a wow factor that we were expecting from these kinds of dishes at these prices. Like the setting itself, the food felt reserved, like it was aspiring to be something it wasn’t.

The grilled beef tenderloin ($32) was the best looking of all the main dishes we ordered. A seared beef filet was set alongside chive-shallot whipped potatoes, grilled vegetables, and goat cheese and pimento cream. An impressive handful of fried onion rings was piled on top. Two friends ordered this one, and both asked for it medium rare. One came out medium rare and the other medium well. They were fine, but not quite $32 good. The cornmeal-crusted sea scallops served on sun-dried tomato risotto ($29) was in the same boat, as were the herb-grilled lamb chops ($29). All were good, but none great. Were our expectations too high?

The Library feels like the kind of place you would go to for a special occasion if you wanted to go to a place that overtly feels like the kind of place you want to go to for a special occasion and where great food isn’t the focus of the evening. It feels like a conservative Southern country club where formality might be an end in itself; a place where grandparents would want to take their grandson to celebrate his graduation from high school; a place where a couple of 18-year-olds might go before the prom; a place where a group of first-time tourists who don’t dine out much would be right at home, where they could splurge for dinner and get a history lesson at the same time.

On a very positive note, the service was excellent. Our waiter was knowledgeable and upbeat, and even made a funny joke about the sad and angry expression on the face of one of the women in an old portrait hanging on the wall. And the Library’s setting is definitely worth experiencing. But with better places around town in the same expensive price range, it’s hard to justify making the Library a regular fine-dining spot.