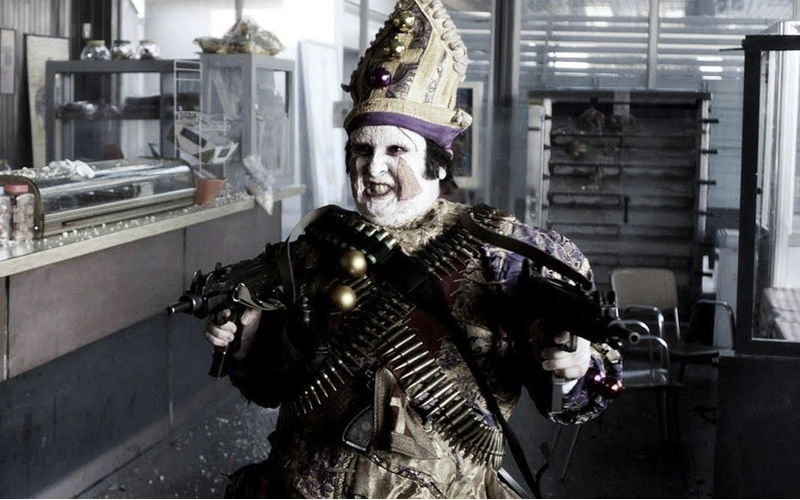 Send in the Clowns

At some point in time, Bozo and his mirthful ilk stopped being fun and started being scary. Really scary. Fond childhood memories have been replaced with monsters and pedophiles, like the crazy doll from Poltergeist, those Killer Klowns from outer space, Pennywise from Stephen King’s It, and don’t forget the real-life serial killer John Wayne Gacy, a.k.a. Pogo the Clown. They’ve been relegated to horror films and Juggalo gatherings.

But in the first half hour of Alex de la Iglesias’ The Last Circus, it seemed like there was an attempt to change pop culture’s anti-clown agenda. Boy, was I ever wrong. When one of the film’s clowns announces, "If I weren’t a clown, I’d be a murderer," it becomes clear that we’re in for an episode of Clowns Gone Wild with a tinge of political allegory.

At the beginning of the film, we see a couple of happy clowns deliver some old-fashioned, non-terrifying fun to a slew of kids in 1937 Spain. Within a couple minutes, the performers are forced to serve in the Spanish Civil War. It turns out that one of them also knows how to wield a machete, and the sight of watching this guy mow down an entire platoon of soldiers while still dressed in all his clown gear is, in the words of Bill and Ted, excellent. Unfortunately, this leaves his son, Javier, without a dad.

Flash-forward to 1973, near the end of the Franco regime, and Javier has followed in the oversized footsteps of his pops. A portly, job-hungry man who is too much of a sad sack to be a Happy Clown, Javier must take on the makeup of a Sad Clown for a touring circus. Within minutes, he meets the residents of this extended family. There’s the boss, the animal tamers, the human cannonball, and some other eccentrics. The resident stars, Sergio, a Happy Clown, and Natalia, a trapeze artist, are the happiest of couples. Well, kind of. Well, not really.

During a night out on the town, the misfits gather for a dinner. When Sergio decides to tell a dead baby joke, most of the table laughs — � with the exception of Javier, who instead tries to understand why the joke is seen as funny. The situation gets more awkward when Sergio beats Natalia for expressing her annoyance at his sick joke. As Sergio and his gang leave the table, Javier rushes to her side. A love triangle is born, with the bad-boy clown and nice-guy clown battling over the affections of a woman with deep-seated masochistic issues. It doesn’t take a Michele Bachmann to see that Natalia symbolizes Spain, while Sergio and Javier represent the warring factions of the Francoist era.

As the fight over Natalia escalates, all three parties descend further into madness, and just like it, the film gets louder, prettier, and more bombastic. Carlos Areces’ melancholic, increasingly unhinged Javier and Antonio De La Torre’s psychotic Sergio are excellent portrayals, but it’s the director’s real inspiration, Carolina Bang, who steals the show as Natalia. Iglesia and his director of photography, Kiko De La Rica, are able to showcase her beauty and her tragic downward spiral the same way Brian DePalma used Nancy Allen as his muse in Dressed to Kill.

There are great moments that litter the 105 minutes of The Last Circus. From a running human cannonball gag, to the outright ugliness of seeing Javier fly off the rails dual-machine gun style in a restaurant, to the lingering beautiful visuals of Natalia dangling from a red cloth, the movie has lots of visual treats that echo the cinematic surrealism of directors Terry Gilliam and Alejandro Jodorowsky. While the film has great editing, good acting, awesome photography, and a bevy of wonderful moments, a lot of those elements don’t seem to coalesce into an emotionally engaging movie, and the political allegory doesn’t keep it from being a mindless exercise.