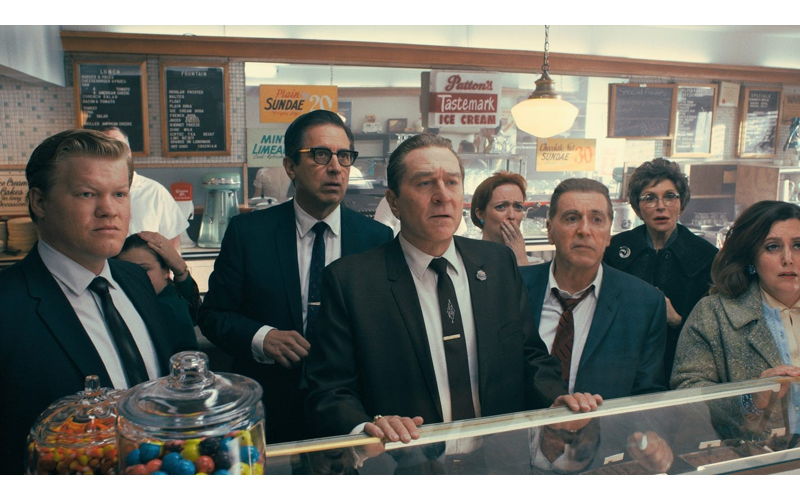 Flashes of Violence, Moments of Meditation

When the public first heard that Martin Scorsese was making a new film that would revisit the mob genre he’s best known for with three actors also known for their roles in gangster classics, fans were amped. What more could fans of mob movies ask for? How about a gangster epic that clocks in at a butt-numbing 3 hours and 29 minutes?

After seeing The Irishman (titled onscreen as I Heard You Paint Houses, the title of the book on which it’s based), there are moments where you’ll be cognizant of the film’s length — but not in a bad way. It’s an entertaining film.

We start with one of the maestro’s signature moves. At the outset, The Irishman leads us through a series of busy hallways in a retirement home until settling on one wheelchair-bound resident, Frank Sheeran (Robert De Niro) as he looks back on his life. From his (possibly unreliable) perspective, we follow his life over many decades — from WWII soldier to blue collar Joe trying to get by to his friendship with Russell Bufalino (Joe Pesci), head of the Bufalino crime family, and, ultimately, his involvement in the disappearance of his friend Jimmy Hoffa (Al Pacino). On its face, this is well-worn material for Scorsese fans, but there’s more.

We don’t get many fast-cut scenes that throw you head-long into the anxiety or catharsis of vibrant, spry characters. Instead the film, like its main characters, moves slower. It’s safe to say that there are some scenes that move at a glacial pace.

In most of Scorsese’s crime dramas, the films end on a rollicking note with a song that matches the chaotic ethos of its characters. Like in Goodfellas, Henry Hill’s coke-fueled saga closed with The Sex Pistol’s rambunctious cover of “I Did it My Way,” Frank Sheeran’s story concludes with The Five Satins’ “In the Still of the Night.”

The Irishman has many familiar trappings of mob flicks — big band music underscoring flashes of violence while criminals engage in humorous, vulgar banter. Rather than wallow in the intoxicating excess of the genre that he helped popularize, this time Scorsese decides to explore something that’s not quite as immediately tangible.

This is a crime epic for sure, but a meditative quality permeates the last hour. It recalls Sergio Leone’s Once Upon a Time in America and Silence, Scorsese’s 2016 lamentation on mortality, regret, and faith. At one point late in the film, an older Sheeran is praying with a priest that makes futile attempts to wrangle an emotional breakthrough from the tight-lipped sinner. The confessor fights the impulse to purge himself of the existential suffering he’s brought to those he loves. It’s a poignant moment.

If there were any qualms to be had, it’s the de-aging effects used on the talent. It can be distracting in some scenes but, in hindsight, I think that has as much to do with being familiar with the actors themselves. (Though it definitely doesn’t come close to Rogue One re-animating Grand Moff Tarkin.)

None of this takes away from how compelling this film is. Robbie Robertson’s score adds to the grit. You’ll get swept up in Steven Zallian’s busy adaptation. Deniro’s Sheeran, though a violent criminal, is a walking bundle of relatable anguish.

As a flamboyant and tragic Hoffa, Pacino owns the room when he’s on screen. Pesci’s reserved portrayal of Bufalino is the definition of menacing. Reliable talents such as Pacquin, Ray Romano, Harvey Keitel, Jesse Plemons, Bobby Cannavale, Steven Van Zandt, Stephen Graham, and Katharine Narducci round out a solid supporting cast.

Needless to say, there is a lot to take in. You’re dealing with 209 minutes of information, for God’s sake. You get signature manic moments and visceral flairs, but there are plenty of contemplative moments in the midst of the tropes.

Maybe Scorsese is reckoning with the cinematic monster he helped create.