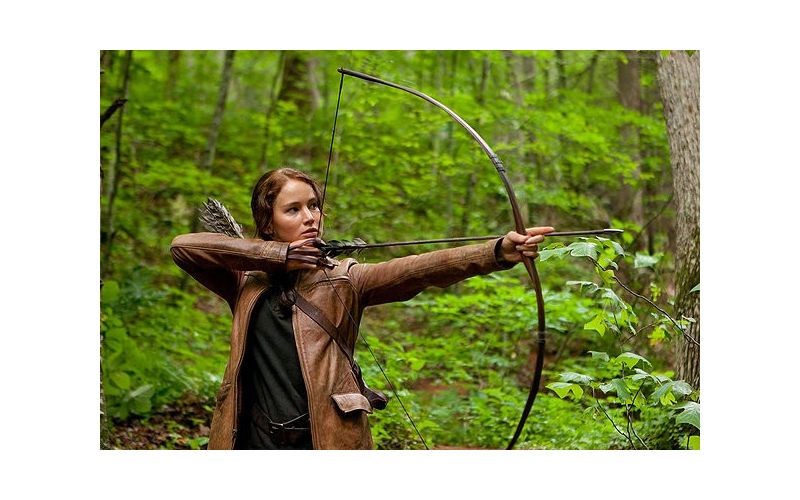 The best dystopian fiction recalls our present and forebodes our future course. Author Suzanne Collins’ The Hunger Games is no different, a sci-fi nightmare of a very recognizable now. It’s very hard not to see a distorted prism of our own reality-TV and sports-dominated world in Collins’ story of the future world children of Panem battling in a gladiatorial death-match for the entertainment of the upper-classes.

At its best, this successful, though not overwhelming, film adaptation of The Hunger Games lampoons the tawdry neon shades, effusive razzle dazzle, and spectacles of debasement and triumph in contemporary American entertainment, a la Fox News, American Idol, Fear Factor, and Dancing with the Stars. Director Gary Ross does a good job of parroting the same bellicose, tacky bluster of American entertainment that Stephen Colbert so skillfully sends up.

Already the queen of her own survivalist genre, Jennifer Lawrence did some similar squirrel-skinning, child-protecting, and violence-navigating among the clannish hillbilly meth-cookers in her breakthrough role in Winter’s Bone. In The Hunger Games, Lawrence is the battle-ready Katniss Everdeen, a skilled hunter and resident of the impoverished Appalachian-esque District 12 in the postwar country of Panem. She is a child of nature introduced to the audience in her element: the woods.

In a gesture that establishes Katniss’ street cred, when the annual Hunger Games competition comes around, she volunteers herself in place of her fragile young sister as a competitor in the winner-takes-all event. Referencing the Greek myth of the Minotaur, with its young Athenian tributes battling to the death, the Hunger Games competition takes children from the impoverished districts that compose this grim future world and preps them to battle to the death, all for the delight and entertainment of the well-heeled 1-percenter citizens of the Capitol, led by President Snow (a quietly menacing Donald Sutherland). Like so much science fiction, which visualizes a dramatic split between the haves and the have nots, tributes like Katniss are sacrificial lambs on the gladiatorial field, the playthings for a morally corrupt society that likes to imagine they are rewarding pluck and virtue by watching kids in the prime of life kill each other for sport.

Part of the thrill of watching a bestselling novel translated to the screen is the clever visualization of the look and feel of this future, especially in its inspired costume design, of Thierry Mugler meets Dorothea Lange. The aesthetics of social decay in Gary Ross’ The Hunger Games are their own cornucopia of references, from the dandified men in brightly colored powdered wigs reminiscent of pre-Revolutionary France to the smarmy affectations of Rat Pack showbiz in TV personality Caesar Flickerman (Stanley Tucci). The gawdy Capitol and its coddled, outrageously outfitted citizenry is contrasted with the Depression-era dust bowl vibe of District 12, where the populace in cotton dresses, the coal miners, and the sooty air suggest Metropolis-meets-The Grapes of Wrath, all rendered in janitorial shades of grey.

The real action naturally takes place once the tributes enter the wild, enveloping woods outside the Capitol, where the games go down. But this PG-13 version has been largely purged of the gruesome violence that made the novel such a sensation with thrill-kill librarians and the preteen set. Katniss has also been partially cleansed of her more violent tendencies. You get the feeling the filmmakers felt a heroine who kills to save herself wasn’t palatable to their adult sensibilities, though preteens and teenagers could undoubtedly handle that content, even if the MPAA could not. Collins was clearly able to imagine a complex female character both nurturing and violent, but the filmmakers seem less able to stomach that mix.

Lawrence possesses something hardscrabble and real in her onscreen demeanor that invests Katniss with the necessary grittiness few Hollywood starlets could pull off. She’s a modest beauty with a halo of sadness around her. Katniss’ handsome, delicate love interest Peeta (a charming Josh Hutcherson, so memorable as the I’ve-got-two-moms Laser in The Kids Are All Right), who becomes her ally in the Hunger Games, recalls a maidenesque Daniel Craig rescued by Rooney Mara in The Girl with the Dragon Tattoo. It’s a bit of a thrill to see a bow-hunting girl nursing and defending her man, a good enough takeaway on its own to recommend The Hunger Games to both kids and the parents who drive them to the movies.

The Hunger Games has been such a smash because of its complexity as a clarion call of warning about the world we have created. It is as serviceable as a drama of child abuse in which the old prey upon the young; as an argument for the increasing detachment from nature in the modern world; as a lament about the growing desensitization to violence that writer Collins first observed in the Iraq War, which inspired her to write the book. Choose your allegory.