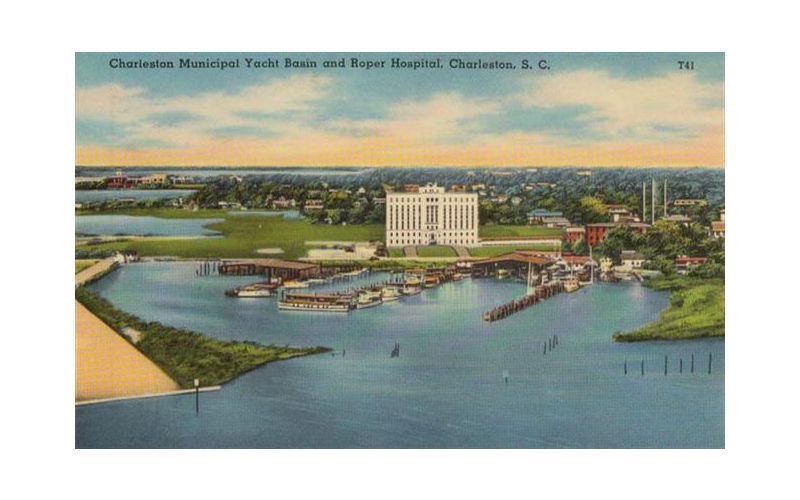 History teaches important lessons, not the least of which is the lesson of where not to drive downtown on a rainy day. The high ground of the peninsula between the Ashley and Cooper rivers that was first settled in the 17th century has been expanded by the filling of creeks and marshes. This “made land” was created to enlarge the city’s footprint, and while the process ultimately eliminated sources of water-borne diseases, the process often made conditions worse.

“Much remains to be done yet, ere all the creeks and marshes, which intersected the site of the city, will be obliterated … In another century, it is to be hoped, this salutary event will be fully accomplished….”

Architect Robert Mills, in his Statistics of South Carolina (1826), recognized that the effort that had been expended by the community for nearly 150 years to convert creeks and marshes “to a firm, high, and dry state required perseverance, time, labor, and expense. Much has been done, but much still remains for future enterprise.” Mills explained that “as Charleston extended, and land became more valuable, industrious enterprising individuals, by draining marshes, and filling up creeks, advanced their private interests, and contributed to the growing salubrity of the town.” The Halsey Map, a most interesting map created in the mid-20 century (visit halseymap.com to view it), illustrates the changing contours of the peninsula over time.

“As late as the year 1754, the pond at the Statehouse Square [Meeting and Broad], continued to be a harbour for wild ducks…”

Bodies of water used to ebb and flow in places we might not expect. A pond at the lower end of Meeting Street was filled by 1769. Vanderhorst Creek, which is now Water Street, was filled by 1792. The City Market and Market Street were built upon Governor’s Creek between 1804 and 1807. By 1819 there was still much to be done to fill low lots and creek beds in what is now Harleston Village, including a creek between Beaufain and Wentworth streets.

Some of these creeks were scenic and popular. Cannon’s Creek, which extended from the Ashley River toward Felix Street between Calhoun and Cannon Streets, was crossed by a bridge. According to a tour guide published in 1870, “Cannonsborough Bridge [as late as 1845] was a favorite resort in summer … but the gradual closing up of the land around it, and the continued increase of vehicles to and fro, have rendered it less agreeable…”

“The low grounds in all the numerous creeks and marshes, which then cut up this whole [Cannonborough] district, are now hot beds of fermentation, and give out their deadly gases in sufficient quantities to infest the entire district.”

Major yellow fever epidemics in the 19th century caused local medical officials and scientists to question the wisdom of filling creeks and marshes, in part because they impacted the natural ebb and flow of water, stagnating water and creating an environment for the cultivation of diseases and “marsh miasma.” City officials had been using trash and waste to fill low lots. In 1839, Dr. Thomas Y. Simons, chairman of the Board of Health, pointed out that “it is obvious, that if the law requires the citizens to remove all the rubbish and offals from their residences, regarding them as nuisances, the concentrating them upon one spot, for the purpose of filling up streets made on our marsh lots, must be infinitely more pernicious and injurious, as well as improper.”

In 1859, a report commissioned by City Council on the yellow fever epidemic of 1858 related a particularly nauseating story. “The entire offal of the city was transported to … and deposited along President street,” wrote a committee assigned to study the epidemic. “This street runs through the marsh, so that at every high tide the whole of this sweltering mass was saturated with water and its putrescence dissolved, or suspended, so that when the tide receded, the foul matter was spread over the whole surface of the marsh, where it was left to be acted upon by the summer sun. The result may be easily imagined. But those who realized the actual condition of things from personal observation cannot easily forget the disgusting sight and smell.”

“There is no prettier place in Charleston for a stroll, on a bright sunshiny day, than the West Point Mills. Situated in the western part of the city, away out on the point of a peninsula, between two large mill-ponds, their appearance is picturesque in the extreme.”

Yet where creeks and marshes were not filled, they could be successfully dammed and used to create tidal basins to power saw and rice mills, and later harbor yachts and even seaplanes. And those places could also be beautiful. What is now Colonial Lake, which was originally fed by Coming’s Creek, had such an origin. On the west side, extensive industrial use of these reservoirs of water was made by Daniel Cannon in the late 18th century for his saw mills at the western end of Calhoun Street (formerly Boundary Street). In the mid-19th century, entrepreneurs pushed further out into the Ashley River marshes, constructing the West Point Rice Mill (the large brick structure that sits next to the marina) at 17 Lockwood Boulevard.

Later owned by Jonathan Lucas, what became known as the Lucas Mill Pond was eventually converted into the Municipal Yacht Basin (after a failed attempt to turn the old West Point Rice Mill into an international sea plane terminal hosting flights from Germany to Charleston). The yacht basin was used by the U.S. Coast Guard during World War II and was eventually cut off from the Ashley River by the construction of Lockwood Boulevard in the 1960s and is now a placid body of water fronting Halsey Boulevard.

That so much of our city is built on filled creeks and marshes is the reason why so much of the city encounters flooding in heavy rains and high tides. While technology might solve the problem, it is a problem as old as the city itself. And as the sea level rises and the number of people and cars on our downtown streets increases, it is a problem that will only become more difficult to solve with wider impacts.

“The Mill Pond Oyster … which, for flavor and plumpness, is well known to be unsurpassed.”

—advertisement in the Rural Carolinian, 1870

Perhaps we can eat our way out of the problem. The next time Ashley Avenue floods near Calhoun Street, which could be almost any day, think about the Mill Pond Oysters that used to be harvested there. They were cultivated during the early 19th century, and “this special variety of oyster … was considered the finest type grown in Southern waters. Their flavor was desired by the epicure, their size was enormous, they were fat, yellow and most inviting, and the shell externally was as black as jet, and internally was a pure white, spotless pearl.” They were so valuable that the mill ponds were guarded at night to prevent theft. Yet with the closing of the mills and the changing quality of the water, they were extinct by the 1870s.

Perhaps, once again, they can be cultivated in the low spots. And after a few Mill Pond Oyster Roast fundraisers, we can afford to buy a pump or two along the Crosstown.

Evan R. Thompson is the executive director of the Preservation Society of Charleston.

What is so magical about the Abandoned Building Revitalization Act?

On June 11, 2013, Gov. Nikki Haley handed owners of abandoned buildings a magic wand when she signed into law the most powerful incentive for neighborhood revitalization that South Carolina has ever seen.

How we can improve the Board of Architectural Review process