The Green Book’s guide to Charleston under Jim Crow 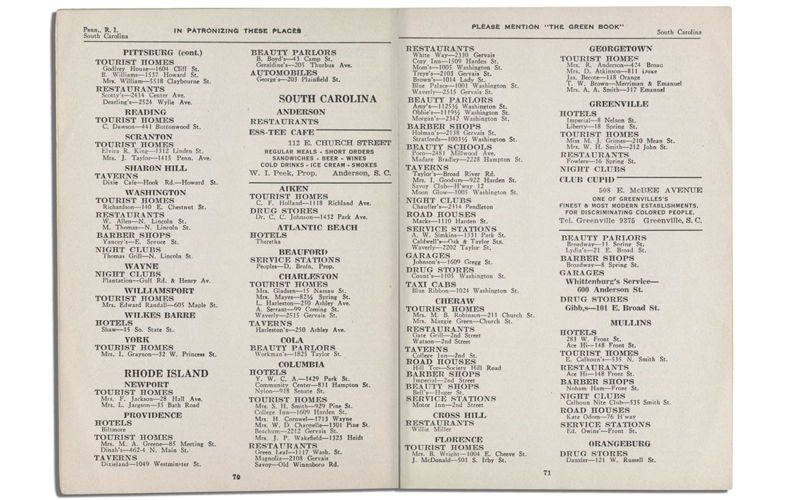 As America entered the 1950s, the automobile opened up a new world of possibility when it came to travel. The nation had seemingly gotten smaller as highways stretched from city to city. But while many Americans found themselves in love with the open road, the country’s African-American population was faced with the crippling fear of what awaited them at the next stop. And in the era of Jim Crow, they had only one thing to guide them — The Green Book.

Published from 1936-1964, The Negro Motorist Green Book served as one of the only resources for African-Americans to safely navigate the country. Providing a reliable list of locations in cities across America where travelers can find a place to stay or get a meal without harassment, The Green Book was a necessary tool for those living in the time of “separate, but equal.” And as Michael Hall points out in his 2014 article on The Green Book published in the journal Postcolonial Studies, this guide was no more necessary than here in the South.

“While African-Americans expressed an increasing desire to travel the U.S. (and abroad) in the early 20th century (particularly in the 1920s and 1930s), Jim Crow laws and practices made it difficult, if not dangerous and untenable, to travel through many regions of the country without incident,” he writes. “This was particularly true in the U.S. South where regional customs often sanctioned racial violence and intimidation as a response by white Americans to African-Americans’ struggles to improve living conditions and life opportunities in a post-Reconstruction climate.”

As The Green Book‘s creator, a former postal worker by the name of Victor Green, points out in the 1956 edition, African-Americans had to rely solely on word of mouth when finding accommodations on the road. With no way of knowing what services would be available to them until they arrived in a city, African-American travelers at the time were met with the constant risk of walking into the wrong business and being denied service — or worse.

With no way of knowing what services would be available to them until they arrived in a city, African-American travelers at the time were met with the constant risk of walking into the wrong business and being denied service — or worse.

So where did this leave motorists headed to Charleston during this time? What was available for those visiting the city simply seeking a place to stay? The answer is: very little.

For most editions of The Green Book, Charleston offered only four or five safe, reliable locations where African-American tourists could rest their heads. Most of the addresses listed were nothing more than small, private homes that black owners had opened up to travelers coming into the city.

At 82½ Spring St., there was Mrs. Mayes Tourist Home operated by Annie C. Mayes in the early ’40s. On Coming Street, there were rooms available at the home of Gabriel and Annabell Serrant. According to the 1942 Charleston city directory, Gabriel worked as a waiter at the Fountain Inn located on Savannah Highway at the time, while Annabell managed their home.

For travelers looking for a safe place to relax after a long drive, there was Harleston’s, which The Green Book lists as a small tavern run out of a home at 250 Ashley Ave. The 1940 city directory lists that address as the residence of William Harleston, a delivery man for Byars Drug Store, who lived there along with his wife Huldah and their three children — Jas, Clayton, and Emily.

In the directories from that era, you’ll find the Serrants, the Harlestons, and Mrs. Mayes listed in the section set aside for “colored residents.” Even in the city’s listings, African-Americans were kept separate, with the pages including their names tinted a different shade than the rest of the book. None of their addresses are mentioned in the sections naming Charleston’s hotels or tourist homes. As a visitor, you’d need The Green Book to know they were there.

As ownership changed hands and families moved, small inns like those run by Mayes and the Serrants popped up and disappeared over the almost 30 years that The Green Book was published. But beginning in 1952 there was one consistent spot listed as a safe haven for African-American travelers coming to Charleston — the Hotel James.

Also referred to as the James Hotel or the St. James Hotel, this was the destination for high-profile black guests visiting the city. Located at 238 Spring St., the Hotel James opened its doors Feb. 11, 1952. Owned and operated by the four Washington brothers — George, Edward, Henry, and James — it was the only full-service hotel in the city for African-Americans. Constructed next to the family’s restaurant, the hotel remained open until the late ’70s, after which it was demolished.

“There will be a day sometime in the near future when this guide will not have to be published. That is when we as a race will have equal opportunities and privileges in the United States.” —Victor Green in the introduction to the 1949 edition of The Green Book

“Integration closed it. We couldn’t compete against the major hotel chains, and we couldn’t get the capital we needed to maintain the business,” said Richard Wigfall, one of the Washingtons’ nephews, in a 1989 interview in what was then The News and Courier. “My uncles and my brother worked hard to make the hotel and the grill a success. During all those years in business, they had differences, but they worked together. That’s the important thing for any success.”

Much like the Hotel James, The Green Book also met its end with the rise of integration. But this was an end that the book’s publisher had dreamed of from its inception. All along, The Green Book was intended to serve as a reliable guide until the times changed and African-Americans were one step closer to equality. And when the day came, Mr. Green would welcome the end of his publication with open arms.

“There will be a day sometime in the near future when this guide will not have to be published. That is when we as a race will have equal opportunities and privileges in the United States,” Green wrote in the introduction to the 1949 edition of The Green Book. “It will be a great day for us to suspend this publication for then we can go wherever we please, and without embarrassment. But until that day comes, we shall continue to publish this information for your convenience each year.”