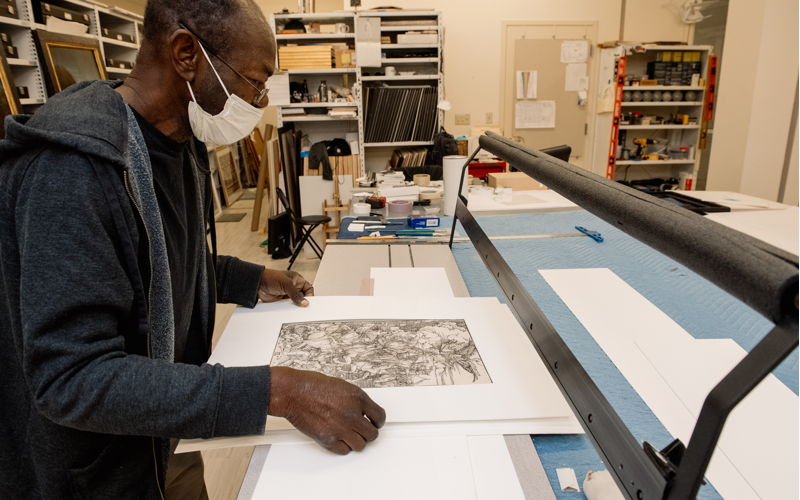 “This is material that will be unfamiliar to anyone,” said the curator of the Gibbes Museum of Art’s latest exhibition, Charleston Collects: Devotion and Fantasy, Witchcraft and the World’s End, Lawrence Goedde. A professor at the University of Virginia, Goedde specializes in Northern Renaissance art, work that often prominently features religious subjects.

You’ll find a troubled Virgin Mary in these images, and a menacing group of malevolent figures, too. And then, of course, there are the witches.

“The depiction of witchcraft themes is not well known to the public at large, and I think the symbolism you get in some Northern art will even be unfamiliar to Roman Catholics, who are used to more overt religious symbols,” Goedde said.

The collection of Northern Renaissance art introduces a world often overlooked in the art found in traditional Lowcountry galleries and museums. That Charleston viewers will find this work unfamiliar — and perhaps, even, unsettling — is part of its intrigue.

The Gibbes’ exhibition is an exciting opportunity for Charleston art lovers to consume art they wouldn’t otherwise see, said director of curatorial affairs, Sara Arnold. Naturally, she likes that the exhibition has local connections, too.

Devotion and Fantasy, Witchcraft and the World’s End is part of the Gibbes’ Charleston Collects series of exhibitions, which feature works from private Charleston collectors. All of the pieces in Devotion and Fantasy are from a single local anonymous collector, and each was hand-selected by the collector and Goedde; the two have known each other since the early ’90s.

“It’s this wonderful way to highlight South Carolina collections while also introducing our community to a broader art world,” said Arnold. “All the work was created in Europe during the 15th and 16th centuries. It’s a special opportunity to see world-class art.”

The exhibition features art created in the Low Countries (Belgium, the Netherlands and Luxembourg) and Germany between 1440 and 1590, highlighting subjects like the Virgin Mary and cultural turning points like the Renaissance and the beginning of the Reformation in 16th century Europe.

The titles of some of the works reflect the religious themes that Goedde said were important to artists, and viewers, of this time period. “Adoration of the Magi,” “The Annunciation” and “Angel with the Key to the Bottomless Pit” speak to Christian values and anxieties surrounding the unknown.

Goedde has divided the exhibition into two viewing spaces: one devoted to devotional images and the other to more secular subjects. According to Goedde, the devotional works of art are naturally smaller and more personal in nature. “These images are made for personal contemplation — these are not big altar pieces,” he said.

Larger pieces in the exhibition are devoted to secular images, including works depicting witchcraft. “There’s a theme of nature which is quintessentially Northern,” said Goedde. “Flemish and German artists were famous for their depictions of the natural world, especially humanity’s position in it.”

Reflections on humanity’s place in the world were natural for the times; the printing press, invented in 1450, allowed for art to be made more quickly and efficiently, and to spread much faster throughout communities. Legendary German painter, printmaker and theorist Albrecht Dürer “did the most to turn printmaking into high art,” according to Goedde. “It was a pretty explicit ambition on his part. Dürer turned woodcuts into a major artform. They were transformed into means of communication that were really serious and profound.”

Perhaps best known for his Biblical scenes from Revelation, Dürer’s The Apocalypse series featured “The Four Horsemen of the Apocalypse” and “The Angel with the Key to the Bottomless Pit.” Both will be featured in the Gibbes’ exhibition.

“His engravings are amazing in their sophistication and complexity,” said Goedde. “Printmaking is a revolutionary medium; it really made imagery more available than it had been.”

Printmaking and its associated “explosion of imagery,” as Goedde described it, led to artists creating and exploring more secular subjects, too. The two witchcraft images featured in Devotion and Fantasy reflect a more experimental attitude from artists of the time.

Goedde, well aware that Devotion and Fantasy will bring a new kind of old art to Charleston, said he’s written comprehensive labels to display alongside each work of art. “The subjects do require some explication as to what we’re looking at and why it’s important,” said Goedde.

With an exhibition title that includes the words “world’s end,” it’s hard not to draw parallels between the symbolism of religious art of the 15th and 16th century and what’s happening in our world today. That’s pretty standard practice, said Goedde. “The tradition of assigning events and people and institutions in the contemporary world to the events in Revelation goes back to the 12th century,” he said. “It’s a tradition that’s unbroken.”

So while scenes of the four horsemen may seem profoundly fitting for the year 2020, try to rest assured that talk of the end of days is a timeless tradition, not a new-fangled manner of fear-mongering. “The reason Dürer’s Apocalypse [series] appeared when it did, in 1498, was because the year 1500 was a millennialist dream, coming a millennium-and-a-half after the death of Christ,” said Goedde. “It was the same frenzy and agitation in the year 2000.”

“Dürer timed his Apocalypse perfectly and he didn’t make it too specific or link it to a specific time and place. It remains surprisingly fresh.”

To learn more about the works in the exhibition, join Goedde for a virtual lecture, Oct. 9 at 1 p.m. During the Zoom conversation ($30/non-members, $20/members), Goedde will introduce the masterpieces found in the exhibition. You can also learn more about the collection during a free, virtual curator-led tour from Sara Arnold, Oct. 15 at 2:30 p.m.