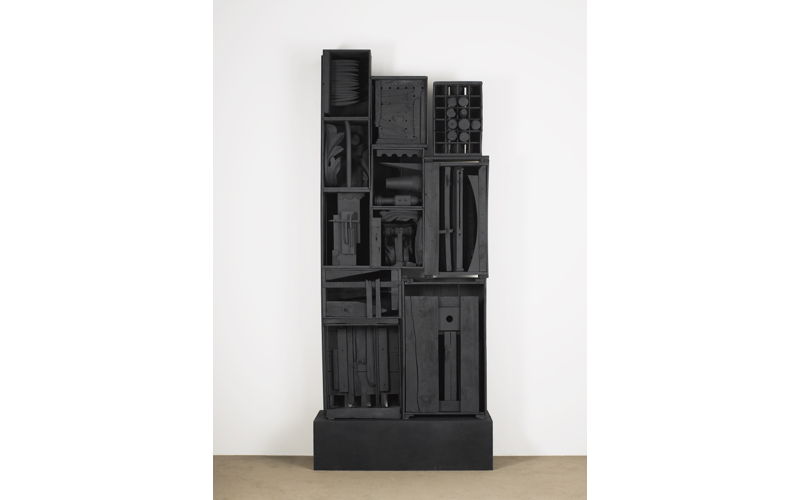 The work of the legendary “Architect of Shadow,” Louise Nevelson (1899-1988), returns to the Gibbes this month for the first time since 1983. The exhibition, entitled A Dark Place of Dreams, marks the 35th anniversary of her solo show as part of Spoleto Festival USA. Only this time, the Gibbes builds upon her legacy by positioning her alongside three contemporary artists — Lauren Fensterstock, Chakaia Booker, and Kate Gilmore — all of whom consider Nevelson a muse. “These are strong women who aren’t afraid to put their voices out there,” says Gibbes’ exhibition consultant Pam Wall. “They’re indebted to Louise Nevelson but also have their own creative vision. They’re all so different and so impressive.”

Nevelson was a pioneer in assemblage sculpture — a process in which many individual components, often found objects, are arranged to create a singular form. Her work is populated by wooden elements tucked into bordering compartments and coated in a monochromatic layer of paint, usually stark black. The finished piece might resemble a birds-eye view of a cityscape cast in shadow or a sectionalized black toolbox.

Like Nevelson, Fensterstock intricately assembles found objects and unifies them with a coat of black paint. The visual similarities are undeniable. “We’re looking at the same things and finding similar answers,” says Fensterstock. “I love to take singular items and understand how they might exist in groups; to see how we can rearrange them and see them in a new way. We’re taking the familiar and making it extraordinary.” But Fensterstock strays from Nevelson’s preference for abstraction. “I’m definitely thinking about specific forms,” she says. These forms appear as natural environments: enormous installations of grasses and water made from cut paper and glass, or contained micro-gardens of cut flowers. A piece included in the exhibition, The Order of Things, presents as antique ebony cabinets overgrown with dripping stalactites. Take a closer look, and you’ll see the myriad of materials, mostly seashells, used to craft the piece. “I love that, with some of the large scale installations, they’re almost like black holes when you first see them, but then you realize when you get close that there are thousands of details. I love how black can flip from something to nothing. Shadow to presence.”

The visual similarity is present in Chakaia Booker’s mystical assemblages as well, though she doesn’t need to cover her work in black paint. Her chosen material does that for her. She works with scraps of rubber tires, manipulating the material to create fluid, dynamic sculptures. “She re-uses and repurposes tires in such a beautiful and kind of lyrical way,” says Wall, “which is what really sets her apart and makes her so impressive — the sheer physicality of creating her work, of bending and twisting, and really reshaping this rubber.” While Fensterstock creates from natural elements, Booker’s use of rubber has an environmentally redemptive quality. Even roadside tire scraps made of nearly imperishable synthetic material can be salvaged and molded into something beautiful. Booker rarely explains her intentions for her work, preferring to leave interpretation up to the viewer. “There’s what she’s thinking as she creates the work, and what the viewer brings to it is equally valid,” says Wall. “She wants that. She wants the piece to be open to interpretation and open to starting a conversation. It’s part of the power of her work.”

Of the four, Gilmore’s work seems to stand in greatest contrast. “Her work certainly is different from the others,” says Wall. “It also ties in well because she has such a focus on materials that all four of those artists share. Pulling together these materials and assembling them in a really powerful way.” Gilmore’s pieces typically begin as performance art through video installments depicting women, herself included, engaged in struggle with physical elements. In one of these pieces, we see a video of her hurdling rocks into bowls of bright pink paint set in black compartments. The paint spills over and sets, transforming into sculpture. Her work serves as a feminist commentary on the obstacles women grapple with daily.

You need to visit these pieces in person to fully grasp their physical and conceptual magnitude. “There’s a lot of planning that goes into it to make sure we have the proper space, the proper materials and everything we need so there’s no surprises,” says Wall. The show was organized by the Museum of Contemporary Art (MOCA) Jacksonville and will reside in Charleston for over three months. The Gibbes’ installation team planned by visiting the show at MOCA and creating small-scale models of the layout. “I think that this exhibition can relate to people who are really interested in art, but there’s also such incredible innovation. Even people who are interested in engineering and how things are built can take away a lot from this. You can really get around these pieces and experience them in a physical way.”