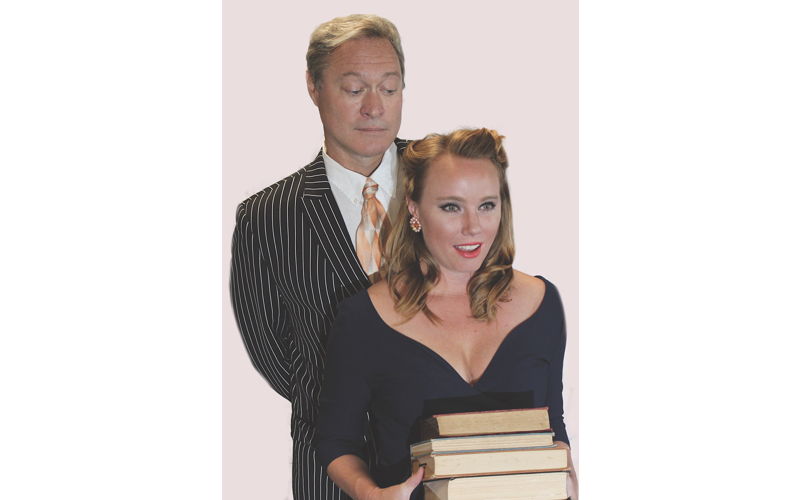 Born Yesterday is usually labelled as a comedy, though there are some very dramatic moments. It’s the story of a sleazy, stinking-rich junkyard tycoon named Harry Brock and his showgirl mistress, Billie Dawn. Brock goes to Washington, D.C. with his equally sleazy lawyer Jim to work some shady deals and grease some political palms but finds himself constantly thwarted in that effort by Billie, who (he feels) lacks the polish, intelligence, and manners to fit in in elite company. Brock brings in a young journalist named Paul Verrall to educate Billie in the ways of literature, history, politics, and the law, and the supposedly airheaded showgirl is a surprisingly quick study, spelling trouble for Harry and his lawyer.

Born Yesterday first premiered on Broadway in 1946, and was made into a film in 1950. Both versions starred Judy Holliday as Billie, a performance that won her an Oscar. Holliday’s performance, which takes her from helium-voiced ditz to savvy, independent-minded woman, is an iconic one. So iconic, in fact, that when Born Yesterday was remade in 1993 with Melanie Griffith as Billie, Griffith echoed Holliday’s performance virtually step-for-step.

Kelly McDavid, who’s playing Billie in the Footlight Players’ production of Born Yesterday, didn’t watch either Holliday or Griffith’s performances while creating her version of the character, at least not at first. And that was a deliberate choice.

“It’s not my first rodeo with iconic characters,” McDavid says. “I played Maggie in Cat on a Hot Tin Roof and Stella in A Streetcar Named Desire. But with Billie being played by Judy Holliday and Melanie Griffith, people have an expectation coming in of who this character is. And I tried to not watch everything that’s been done and bring my own interpretation of the character. Later on, I watched the other performances and the movies to see how the character came across, but I wanted to really discover who she is to me.”

As she said, McDavid has experience bringing iconic characters to the stage, but she says that creating her own version of Billie Dawn was a challenge, both because she put pressure on herself to deliver the comedic moments of Born Yesterday, and also because her character transforms almost completely as the play progresses.

“I had a little difficulty approaching this,” she says, “because the writing is so good and so funny, that as a performer, you really want to make people laugh and really communicate that comedic vibe. But we also wanted to give it a little bit more depth. She definitely goes on a journey more than any other character in the play. She starts out in this idealistic world where she doesn’t want for anything, because she doesn’t know that there’s anything more to want. By the end, she’s a completely different person and sees what kind of power she has in her intellect, and she uses that as her currency.”

In order to figure out how to portray Billie, McDavid had to go deep into her own life experiences to get a handle on the character.

“I think every woman can relate to a time in their life when they felt underappreciated, or not heard,” she says. “And I pray they found a way to demand the attention and respect they deserve. I’ve been through that myself, and I had to go back to that time.”

But it wasn’t just about being heard; McDavid says she also looked back to a period when she didn’t believe she had the tools to make it on her own.

“I believed that my life was going in a direction, and then when that didn’t happen, I remember thinking, ‘What am I going to do now?” she says. “I had a theater degree and some experience, but I didn’t believe I had the skills I needed. The person I am today is a lot stronger and a lot braver and a lot more independent, and I think as an actor my process was pulling from all the experiences I’ve gone through.”

As dramatic as that process sounds, McDavid is quick to say that most, though not all, of the themes in Born Yesterday are delivered in comedic moments, either at the beginning when Billie is a fish out of water in high society situations or toward the end when her intellect is making the other characters’ jaws drop.

“I think sometimes, delivering a comedic line very seriously makes it funnier,” she says. “I think it’s going to be a good mix of comedy and serious themes being delivered. And I think people are going to laugh.”

While it would be quite an exaggeration to call Born Yesterday a feminist work, there are themes of self-realization and independence in the play that perhaps resonate more strongly in today’s culture.

“Looking at it from today’s perspective, it’s still very relevant,” McDavid says. “It’s about a woman finding her voice, and it would appear at least on the surface that there was this progressive transformation that sets her free and empowers her to seek her independence. She becomes a successful example of an independent woman.”