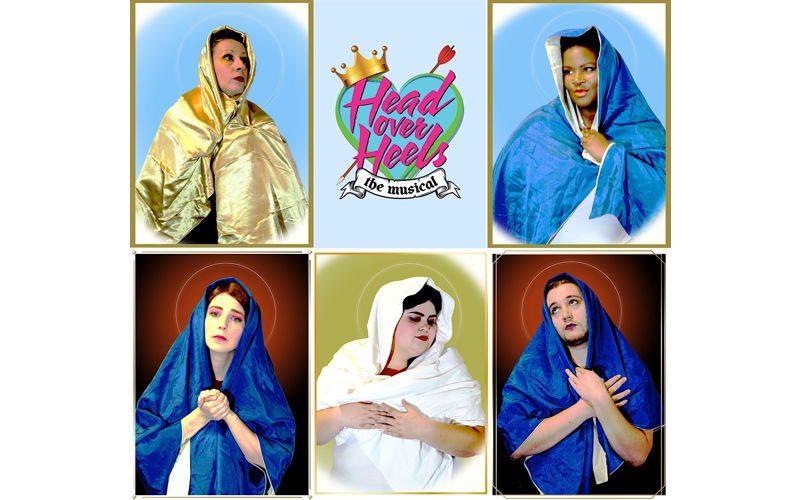 It’s an adage as old as Broadway itself: If you want to create a can’t-miss musical hit, you combine a 16th century literary work with songs by the Go-Go’s.

At least, that’s the lesson that the 2018 “jukebox musical” Head Over Heels seems to teach us. The show, which combines Sir Philip Sidney’s 1585 prose romance Arcadia with 20 or so tunes by the Go-Go’s and solo hits by singer Belinda Carlisle, opened on Broadway last July and ran until this past January.

The songs are easy enough to remember, even if you’re not a child of the ’80s; the score includes “Head Over Heels,” “Our Lips Are Sealed,” “We Got The Beat,” “Vacation,” “Mad About You,” “Heaven Is A Place On Earth,” and a plethora of lesser known Go-Go’s tracks. The plot is far more complicated, so we’ll try to sum it up: A royal family learns of a four-part prophecy that portends the end of their kingdom, Arcadia. They set out on a quest to keep that prophecy from coming true.

But the real story of Head Over Heels is in how well the seemingly unrelated Go-Go’s songs fit into the winding plot, and how well the musical puts across its messages about diversity and acceptance.

For this musical, the plot of Arcadia was re-envisioned by writer Jeff Whitty and adapted by James Magruder to include subtle commentary on gender and sexuality. The standard old-school tropes of true love, mistaken identity and disguises come into play, but true love often comes from unexpected places in the story, the disguises are often gender-fluid, and one character, Pythio, is non-binary. But none of the characters are meant to exist as easy symbols; they simply are who they are.

That’s one of the things that drew Brian Porter, the executive director of Charleston’s Footlight Players theater company, to create a production of Head Over Heels here in town.

“Not to get too serious about it, but it’s a very diverse show,” Porter says. “It covers different ethnicities, sexual orientations, and genders. It reflects society onstage like theater is supposed to do. It challenges the audience and makes them think, but in a fun way.”

Porter also chose Head Over Heels for the Footlight Players because of its recent vintage.

“It literally closed in January,” he says. “Finding new musicals and plays to produce is a challenge. This one was so fresh.”

Both Porter and the director of Head Over Heels, Kyle Barnette, enjoy that this production isn’t about hitting the audience over the head with a message.

“It doesn’t shove anything in your face, because it doesn’t NEED to,” Barnette says. “This is 2019, and this is how society is. So I think even though this show has elements that people might not be comfortable with, the show doesn’t present them as issues. They present them as, ‘This is life. This is how society is,’ it’s not ‘Oh look, there’s a gay character.’ It’s simply the way life is.”

“It’s also a big, frothy, fun, colorful musical with tons of choreography,” Barnette adds, “and at the end of the day we want people to be entertained.”

One of the best examples of how the story combines Go-Go’s material with the plot is at the very beginning of the show, when the cast (eight principal players and six dancers), performs “We Got the Beat.”

The song itself is just as catchy and propulsive as it’s always been, but in this case the song isn’t referring to the drums.

“The ‘Beat,’ is what keeps the kingdom thriving,” Barnette says. “So it would be terrifying for them to lose the beat. So they attempt to defeat these prophecies and save their kingdom. So when ‘We Got the Beat’ kicks off the show, they’re trying to save it. Then you go through the score with songs by the Go-Go’s that are famous, songs from their back catalog, and those two songs from Belinda Carlisle’s solo albums, but they tie in very well to the story.”

Porter is in his second full season as executive director with Footlight, and he says that shows like Head Over Heels fit in perfectly with his vision for the company.

“What’s been exciting for me is finding shows that not only represent our world but are interesting to our actors,” he says. “I’ve seen four or five new faces that I’ve never seen perform anywhere else; the mere fact of what we were doing excited them, so they came to audition for us.”

Barnette echoes Porter’s philosophy when he talks about casting Head Over Heels.

“This show is a new show, so it wasn’t something that was super-familiar to actors,” he says. “And that created real diversity of the casting. The people who wanted to audition characters and think, ‘That represents who I am.’ It’s nice to be able to have roles like that that people can identify with.”

Weekend Roundup: 20+ things to do this weekend in Charleston

It was most likely 1982. One late night I was staying at my Granny and Granddaddy’s house on James Island. Aside from scarfing down any food my grandmama set in front of me or drawing pictures of monsters and cats, I was likely flipping through the cable TV guide looking for horror movies to watch on […]