The Footlight Players dust off Mark Twain’s foray into theater 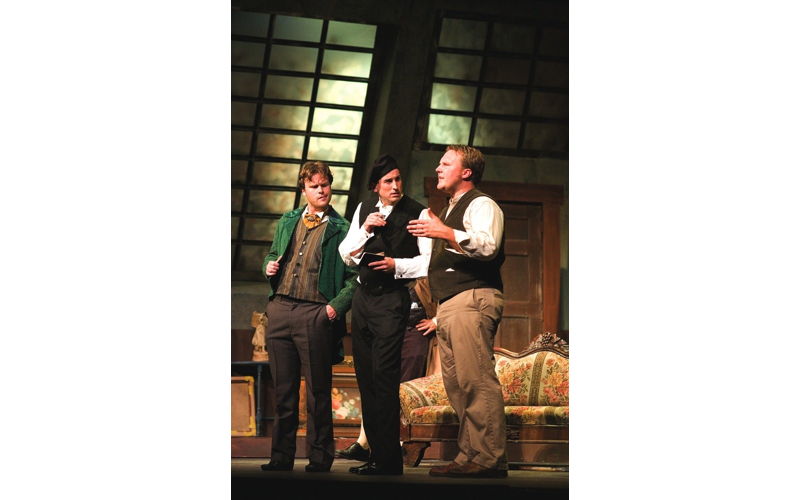 In The Adventures of Tom Sawyer, Tom and his friends Huck and Joe go missing, presumed dead. They enjoy watching their own funeral before announcing that they’re still alive, to the delight of the local populace.

Twenty-one years after writing Tom Sawyer, Mark Twain expanded his grim gag into a stage play. This time, artist Jean-Francois Millet is the rapscallion who lives to witness his own funeral, faking his death to bump up the price of his paintings when he realizes that collectors will pay more for the work of a deceased genius.

Twain didn’t get the chance to see his one and only play, which went unstaged until it was dusted off and revised in 2007. But if he’d been able to watch the Footlights version and observed the audience, Tom Sawyer-like from the wings, he wouldn’t have been disappointed.

After a sporadically funny first act, the second half of the show kicks into high gear with outrageous characters, ridiculous foreign accents and farcical action.

Peter Galle plays Millet, who disguises himself as his twin sister to cash in on his newfound fame. Galle seems most comfortable when he’s in a wig and dress, flouncing across the stage in high heels and fending off male admirers. Lee Lewis is Chicago, an all-American prankster and Millet’s close friend. Lewis is a stable force in a crowd of deliberately over-the-top performances. Rob Maniscalco and Craig Trow play Dutchy and O’Shaughnessy, the latter behaving like a cross between a leprechaun and Brad Pitt in Snatch.

The villain of the piece, dirty art dealer Bastien Andre, is brought to life by Don Brandeburg in the zestiest, most playful portrayal we’ve seen from this local veteran. Actresses Laura Artesi, Lisa Benson, Susan Lovell, and Kelly McDavid also give very confident and enjoyable performances.

Special mention must go to Terry Davey as Leroux, an older character who shows his childish side when he prostrates himself before Millet, and to Sam Jackel in multiple roles, including a British nabob and an uproariously camp valet.

Technical director and set/lighting designer Richard Heffner excels with this show. He’s a true artist, putting more work into the sets than the play requires or deserves. In act one, Millet’s studio is as fully realized as possible on a small stage set, and at the beginning of act two, the dressing room earned a hearty round of applause.

The play has its weaknesses. Despite the involvement of gifted writer David Ives, it’s still very dated and simplistic. There are only two scenes. The asides to the audience are clunky, disrupting the flow of the story. Although the characters are fairly distinct, some of them spend long stretches of time with little to do except react to Millet’s shenanigans, and most of them come across as childish and unsympathetic. The opening act leaves the audience subdued until the arrival of Trow, who particularly appeals to younger patrons.

Director Greg Tavares, better known as a founder of The Have Nots!, successfully spices up the stale material by encouraging his actors to clown around. The gusto streamlines the creaky plot and juvenile jokes. This is no realist masterwork; instead it’s a fun and gaudy postmodern piece painted with broad, sure strokes.

Is He Dead? was a critical hit on Broadway. It’s impossible to tell whether it would have been as successful if it had been staged in Twain’s day. But now that he’s recognized as a long-lamented genius, the value of this lively play has definitely increased, even if it’s not always dead funny.